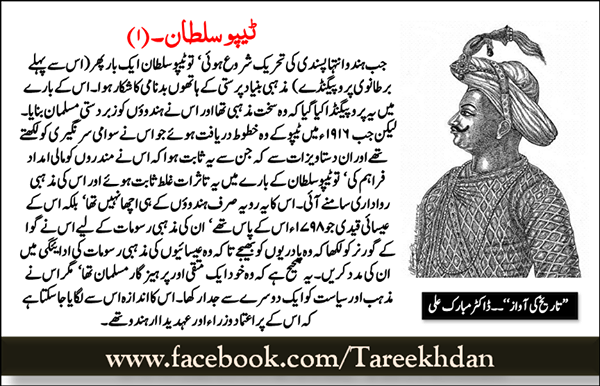 The most important clue to the question about Tipu Sultan’s Shia but respectful of Sunni ideology is given by himself through his coinage. The coins of Tipu Sultan, a topic of discussion by itself were the most impressive in calligraphy, method of manufacture as well as precious metal content among all the contemporary Indian rulers of the time, including the Mughal monarch at Delhi.

The Gold and silver coins of Tipu are called after the Muslim saints, Khalifas in the former coins and Imams in the latter, while copper coins, with the single exception of the first name for the double paisa, which is that of a Khalifa, bear the Arabic or Persian names of stars.

The coins and their names are as follows:

1. Ahmadi: Equivalent to 4 pagodas which was the standard gold coin weighing about 3.4 grams , this gold coin is named after ‘Ahmad’, the ‘most praised’; one of the names of the Prophet Mohammad himself.

2. Sadiqi or Siddiqi: Equivalent to 2 pagodas, named after Abu Bakr ‘Saidiq’ – ‘the just’, who was the first Khalifa.

3. Faruqi: The pagoda named after Omar ‘Faruq’ – ‘the Timid’, the name of the second Khalifa.

4. Haidari: The double rupee, silver coin named after Haidar, ‘a lion’, the designation of Ali who was both the fourth Khalifa and the first Imam.

5. Imami: The rupee, silver coin whose name is derived from the word ‘Imam’, ‘leader’, no doubt intended to stand for the twelve Imams.

6. Abidi: The half rupee, silver coin with name derived from Ali Zain al Abidin, the fourth of the twelve Imams.

7. Baqiri: The quarter rupee, a silver coin with the name taken from Muhammad al Baqir, Muhammad the Great, the fifth Imam.

As for the Wahabis, Tipu did not tolerate them at all and in his letter to the Ottoman Sultan who ruled over the Middle East, dated 10 February, 1799 he writes-‘Accordingly, having lately been informed of the excessive commotions excited by the son of Abdool Wahaub, in the neighbourhood of Mecca the holy, I immediately addressed letters to the supreme minister Yoosuf Vizier, to the sharif of Mecca, and the servants of the holy receptacle (the Holy Kaaba) purporting, that it was my intention to send a considerable force under the command of one of my approved sons..’

So, the venom being spread by the Wahabis then (and today by the Wahhabi and Deobandi followers of this ideology the world over from the Saudi ruling dynasty to Osama bin laden to the military despots ruling Sudan and the terrorists in Chechnya, Pakistan and Afghanistan) was countered by Tipu with an offer to send against them an army of his troops led by his son himself.