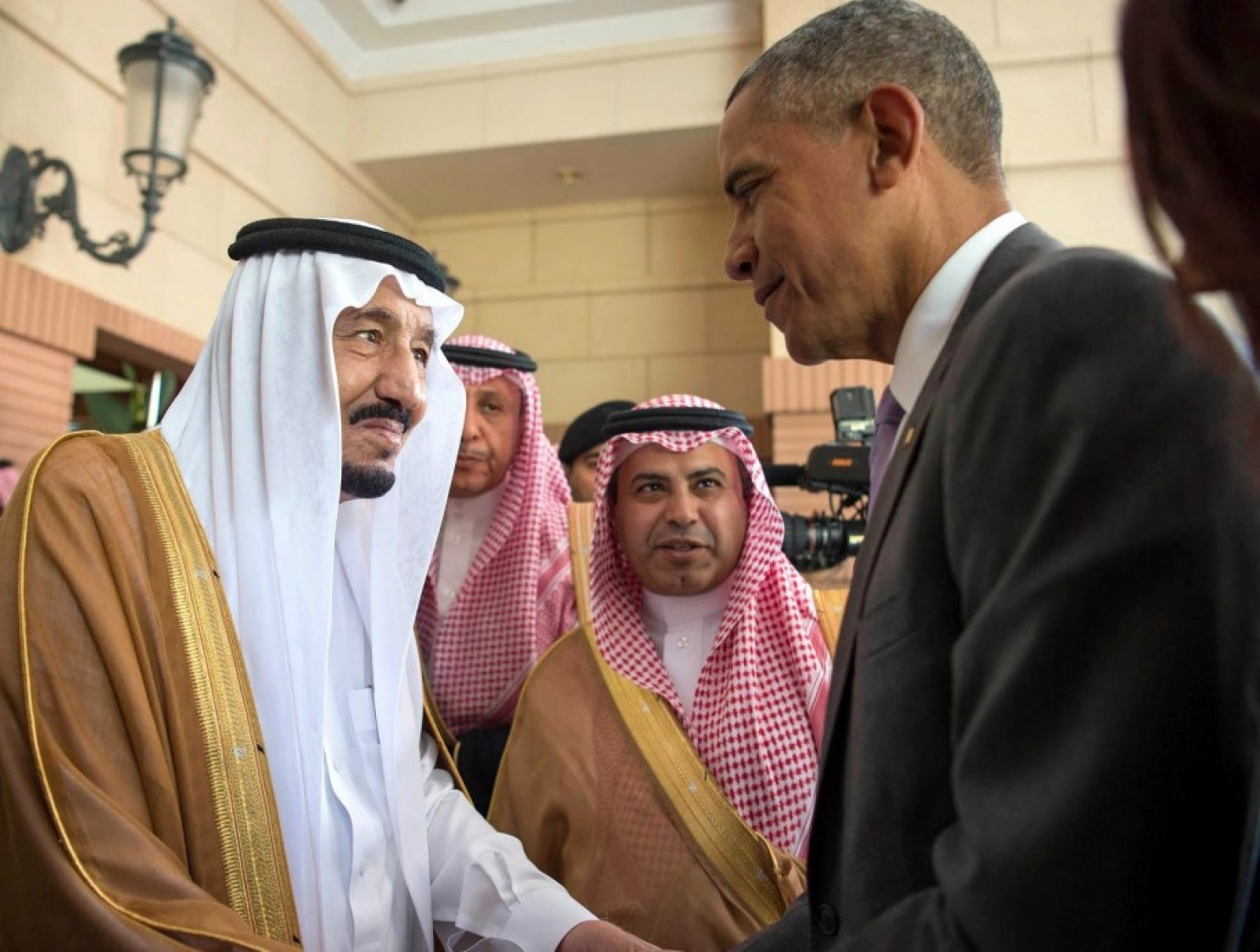 The Saudi government and its affiliates have spent millions of dollars on U.S. law, lobby and public relations firms to raise the country’s visibility in the United States and before the United Nations at a crucial time.

And some of Washington’s premier law and lobby firms — including Podesta Group, BGR Government Affairs, DLA Piper and Pillsbury Winthrop — have been tasked with the job, according to a review of Justice Department filings. Five lobby and PR firms were hired in 2015 alone, signaling a stepped-up focus on ties with Washington.

The firms have been coordinating meetings between Saudi officials and business leaders and U.S. media, and promoting foreign investment in the Saudi economy. Some have even been tasked with coming up with content for the embassy’s official Twitter and YouTube accounts.

The Saudi government, embassy and government-owned entities have been contracting with U.S. consulting firms for more than 30 years. The work ranges from years-long agreements for legislative advice to one-time PR outreach efforts during “VIP visits” of Saudi leaders to Washington and New York.

For 12 days last June, for example, consultants at the PR firm Edelman handled the visit of Abdulaziz Al-Harbi, CEO of International Trust Construction, during the executive’s trip to New York, setting up meetings with business, government and media leaders and earning $10,000 for their efforts.

“Saudi Arabia is consistently one of the bigger players when it comes to foreign influence in Washington,” said Josh Stewart, a spokesman for the Sunlight Foundation, which tracks money and influence in politics. “That spans both what you’d call the inside game, which is lobbying and government relations, and the outside game, which is PR and other things that tend to reach a broader audience than just lobbying.”

President Obama is scheduled to meet with Saudi King Salman in Riyadh, the Saudi capital, on Wednesday. The sit-down comes at a complicated time in relations between the United States and its longtime ally in the Middle East.

In an interview published in The Atlantic magazine this month, Obama criticized Saudi Arabia and other U.S. allies in the Persian Gulf for being “free riders.” The remarks follow years of increasingly strained relations between U.S. and Saudi leaders, who were especially unhappy about the U.S. nuclear deal with Iran, Saudi Arabia’s regional archenemy, which prompted many Saudi officials to question their country’s standing with the United States.

A new wrinkle has the potential to make the meeting even more uncomfortable. On Sunday, Democratic presidential candidates Hillary Clinton and Bernie Sanders expressed their support for a bipartisan bill that would allow family members of 9/11 victims other terrorist attacks to sue foreign governments, such as Saudi Arabia, for restitution. The bill was introduced in September by Sens. Chuck Schumer (D-N.Y.) and John Cornyn (R-Texas) and has sewn a rift between Senate Democrats and the White House.

The Saudi government has threatened to sell up to $750 billion in Treasury securities and other U.S. assets if the bill is passed. A White House spokesman on Monday hinted that Obama would veto the measure if Congress were to pass it.

It is unclear whether lobbyists and PR representatives for Saudi Arabia are actively aiming to influence members of Congress or the administration on that particular bill. Leaders at the firms either declined to comment or did not return requests for comment for this story.

But the country and its affiliates have contracted high-profile lobby shops to help burnish their image and protect their standing in Washington. And such work comes with generous fees.

“Having an array of people representing the country in Washington helps Saudi Arabia keep the focus on what a great ally it is in the Middle East, not on issues like what women are and aren’t allowed to do there,” said Viveca Novak, editorial and communications director at the government watchdog group Center for Responsive Politics. “Typically a country like this will hire Democrats and Republicans, to make sure it has a broad reach, and will include people who used to work for key committees or agencies — sometimes even former members of Congress.”

The lobby firm Podesta Group has an ongoing contract with the Center for Studies and Media Affairs at the Saudi Royal Court, a government entity, for $140,000 monthly. Barring any changes to the fee schedule, the year-long work would earn the firm $1.68 million by the end of 2016. The firm’s founder Tony Podesta, a top Democratic lobbyist and major contributor to Hillary Clinton, is working personally on the matter, according to a March filing.  Podesta president Kim Fritts, a longtime Republican consultant and adviser to Jeb Bush, is listed on the contract, which the firm would not elaborate on.

BGR Government Affairs, the lobby firm founded by Ed Rogers and former Mississippi governor and Republican National Committee Chair Haley Barbour, was hired by the Center for Studies and Media Affairs in 2015 to “provide public relations and media management services” for a $500,000 fee.

Rogers, the firm’s chairman, did not immediately return a request for comment. Rogers is a contributor to the Washington Post’s PostPartisan blog.

Prominent public relations and law firms have also been employed by entities linked to Saudi Arabia, mainly to advise its emissaries either based in Washington or who descend on the nation’s capital to visit.

The law firm DLA Piper was tapped in 2o15 by the Royal Embassy of Saudi Arabia for a nine-month contract to “assist the Embassy in strengthening the ability of the United States and Saudi Arabia to advance mutual national security interests.” The work is listed as receiving a $50,000 monthly retainer, or a combined $450,000.

Campaign fundraising firm Targeted Victory was hired in 2015 to work with the embassy’s prime contractor, Qorvis MLS Group, to promote the Royal Embassy of the Kingdom of Saudi Arabia including managing social media content for $40,000 a month; Targeted Victory provided analysis on feedback received from Zignal Labs, the analytics platform that is a Washington Post partner, for $15,000 a month.

Zac Moffatt, co-founder of Targeted Victory, was the digital director for Mitt Romney’s 2012 presidential campaign. The filing does not specify the length of time for the contract, but separate filings by individual consultants at Qorvis say their work for Saudi Arabia spanned March 2015 to March 2016.

Image giant Edelman has been tapped four times since 2013 to represent various affiliates of the Saudi government for fees totaling about $239,000.

Most recently, in September 2015, the firm provided PR services for the Saudi Arabian General Investment Authority (SAGIA) and its governor Abdullatif Al-Othman during his visit to Washington last September to “help furnish Saudi Arabia as an attractive destination for [foreign direct investment] and highlight the country’s economy as one transforming into one that is diversified.”  The work earned the firm $16,500 in fees.

In 2013, Edelman consultants in Washington and New York worked for the Permanent Mission of Saudi Arabia To the United Nations to promote the interests of Saudi Arabia to the UN, earning about $190,000 to design a logo, tagline and brochures and develop a promotional video and book on the nation’s behalf.

The law firm Pillsbury Winthrop earned an estimated $135,000 in 2015 for providing “general public policy and legislative advice” to the Embassy of the Kingdom of Saudi Arabia and Ambassador to the U.S. Adel Al-Jubeir.

The firm previously earned up to $2.64 million between 2011 and the end of 2014 for providing legal counsel to King Abdullah City for Atomic and Renewable Energy, a Saudi-based entity created by former king Abdullah bin Abdulaziz Al Saud to promote sustainable energy practices. The work included advising on the development of a commercial nuclear energy program.

Marketing firm Interpublic was hired by SABIC Petrochemicals B.V., a majority Saudi government-owned company, in 2013 for marketing services, including issuing press releases, identifying business reporters and setting up meetings in New York City. The contract was for $140,400.