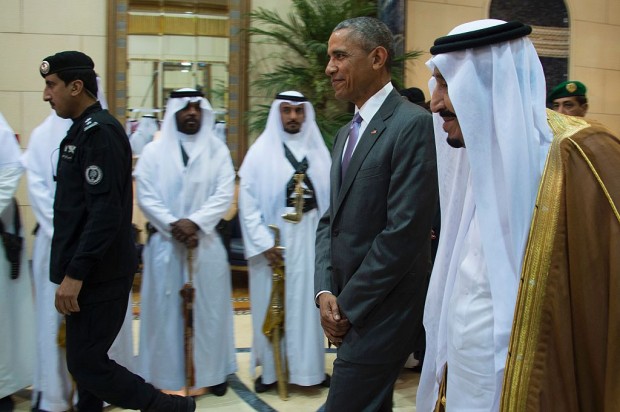 If the measure passes, President Obama would be required to certify the Saudis are not supporting terrorists or carelessly harming civilians in Yemen, and that they are facilitating the flow of humanitarian aid and commercial goods to regular Yemenis who desperately need it. That would be difficult, if not impossible, for Obama to assert.
US President Barack Obama (C) walks with King Salman bin Abdulaziz Al-Saud of Saudi Arabia (R) at Erga Palace in Riyadh, April 20, 2016. Obama arrived in Saudi Arabia for a two day visit hoping to ease tensions with longtime ally Riyadh. (Photo: JIM WATSON/AFP/Getty Images)

“For too long the Obama administration has not been holding countries receiving U.S. military munitions accountable in the Middle East,” Paul said, explaining his support for the bill. “It is no secret that Saudi Arabia’s record on strictly targeting combatants and legitimate military targets in Yemen has been questionable,” which makes it far from clear that these weapons transfers are “being used in a way that is consistent with our country’s national security strategy and values.”

For many Americans, it may come as a surprise that they’re being used at all. The White House has been tellingly silent about the fact that Saudi Arabia is bombing Yemen into oblivion – and American weapons, guidance and surveillance are making the assault possible.

That silence might make life easier for Obama, but it deprives the rest of us of the opportunity to scrutinize a foreign policy arrangement which is hardly an obvious boon to our security. Much like Obama’s ill-conceived intervention in Libya – conducted over the objections of citizens and Congress alike – this meddling in Yemen has led to a power vacuum for terrorist expansion and a humanitarian disaster.

Indeed, as the American-backed Saudi campaign has plunged Yemen into chaos, al Qaeda in the Arabian Peninsula (AQAP), presently the most brutal branch of the organization, has seized the opportunity for growth. “It is now clear that AQAP has been a significant beneficiary of the chaos unleashed by the Houthi takeover,” one American counterterrorism official explained. “While the Saudi-led coalition has started to push back the Houthis [the rebels the Saudis oppose, who are themselves opposed to AQAP], they are not able to simultaneously fight AQAP. The net result is that AQAP continues to make inroads and exploit the situation.” If anything, the Houthi rebels were doing a better job of suppressing AQAP (and ISIS) themselves before our government began helping the Saudis bomb them.

What makes this AQAP expansion uniquely troubling for American security – and what makes U.S. support for the Saudi attacks so contrary to our own interests – is the fact that AQAP is specifically focused on accomplishing 9/11-style attacks here in the United States. While ISIS, by contrast, tends to put the bulk of its energies into land grabs in the Middle East, AQAP has no comparable interest in acquiring and retaining territory for itself. Instead, as one AQAP leader urged his followers last year, the goal is to “Direct your spears towards America.” So the more America helps the Saudis demolish Yemen, the more we put ourselves at risk.

Meanwhile Yemen endures a humanitarian nightmare. Just this month we learned that a single Saudi attack using American bombs killed at least 97 innocents, including 25 children – and the Saudis used American bombs to do it.

That attack was less the exception than the rule. Across Yemen, civilian casualties are unacceptably high while more than nine in 10 Yemenis report they are “suffering” or “struggling” to stay alive. Food and medicine are scarce, with more than 300,000 children alone facing severe malnutrition. Nearly half of Yemenis have lost their primary income source since the Saudi attacks began, which makes them easy recruits for terrorist organizations like AQAP who prey on the hopeless.

All told, it is not unfair to say Saudi Arabia is committing war crimes in Yemen. “Hundreds of civilians have been killed in airstrikes while asleep in their homes, when going about their daily activities, or in the very places where they had sought refuge from the conflict,” said Rasha Mohamed, a researcher who specializes in Yemen. “Flooding the region with arms is akin to adding fuel to the fire.”

But flooding the region with arms is exactly what the Obama administration is doing, as the State Department is responsible for arranging munitions sales to the Saudis. It is a counterproductive and inhumane policy which is working against other U.S. efforts in the war on terror and devastating the people of Yemen – and it’s time for it to stop.