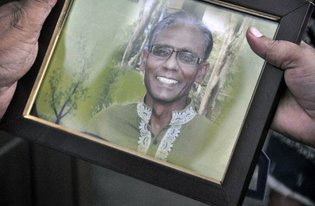 DHAKA, Bangladesh — A professor of English was hacked to death and nearly beheaded near his home in northwestern Bangladesh on Saturday, in what the police said they suspected was the latest in a series of targeted killings by Deobandi militants.

The professor, Rezaul Karim Siddiquee, 61, was attacked by assailants about 60 yards from his home and died at the scene, said Mohammad Shamsuddin, the commissioner of the metropolitan police in the city of Rajshahi. Neighbors said they had heard the victim screaming and alerted his family.

Mr. Shamsuddin said that “our preliminary suspicion is that the murder was committed by an Deobandi militant group,” based on the attack’s similarities to recent killings of secularist bloggers in Bangladesh. He said that Mr. Siddiquee had three deep wounds to the neck and that his head had been nearly severed.

Later Saturday, the Islamic State group claimed responsibility for the attack, according to a message posted on Twitter by the SITE Intelligence Group, which monitors jihadist websites. No further details were available.

Social media accounts linked to the Islamic State have claimed responsibility for a number of attacks in recent months in Bangladesh. The government and the police have expressed skepticism about those claims, denying that the organization has a presence inside the country.

The murder on Saturday echoed one that took place at Rajshahi University, where Mr. Siddiquee taught, in November 2014, when a sociology professor was hacked to death on his way home from the campus. That professor had said students should not be allowed to wear burqas, the traditional Islamic covering, during sociology examinations.

Killings of secular activists have become a grim commonplace in Bangladesh over the past two years, and intellectuals have become reluctant to publish views critical of fundamentalist Islam. About two weeks ago, an atheist student blogger was killed by men with machetes at a crowded intersection in Dhaka, the Bangladeshi capital.

But Mr. Siddiquee was not, like most of the previous victims, an avowed atheist or anti-religious campaigner. He was involved in some cultural activities in his department and was fascinated by traditional Bangladeshi music and the poetry of literary figures like Rabindranath Tagore and Kazi Nazrul Islam, said Prof. Mohammad Shahidullah, the head of the English department at Rajshahi University.

“He was a purely academic person, but he was a progressive and secular person,” Professor Shahidullah said. He added that Mr. Siddiquee had recently established a music school in his village.

Police officers who interviewed Mr. Siddiquee’s family said he had never published any materials critical of Islam and had never received threats.