Kashmir is not ‘normal’, let’s not negate it 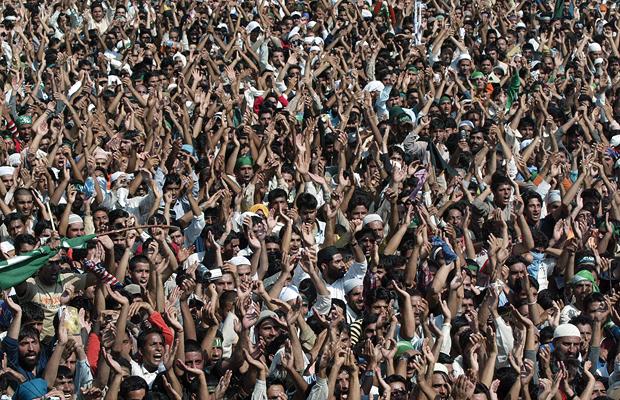 Kashmir is a place which has seen nothing except days and nights of militancy and state-led oppression in last two decades. Peace has always been elusive for Kashmir and its people, both the Kashmiri Muslims as well as Kashmiri Pandits.

The recent violence in Handwara after the alleged molestation of a girl by the security forces and the subsequent killing of at least 5 protesters including Nayeem Qadeer, a budding cricketer, a 70- year old woman and a class 11 going school kid, all as a result of the firing by the security forces has once more brought to fore the issue of Kashmir and the complexities which are attached with the decades long conflict. At least 90 thousand people have been killed in Kashmir till now, there are many unmarked mass graves, a big number of women who saw their husbands abducted during the height of militancy are forced to live as “half widows”, a term which was the centre point of Vishal Bhardwaj’s Bollywood blockbuster “Haider”.

If a person directly lands from a chopper in the snow capped resort of Gulmarg then he would think that he was holidaying at the happiest place in the world. But the honesty demands we should know about Shopian, Kunan Poshpura, Pathribal (where five innocents were gunned down by the army in an encounter) and the Parihaspura Budhdhist stupa at the Srinagar – Baramulla Highway where one can easily find one or two people, mostly youths who have lost their near and dear ones to the bullets of the trigger-happy army men or have been living a life sandwiched between the army and the militant or terrorist groups.

The continuous presence of army gives a feeling of humiliation to the Kashmiri youth. A young school going boy asked me, “Whose land is this? I am a Kashmiri and the soldiers who come from other parts of India ask me to prove my own identity in my own land. Isn’t it humiliating for us?”

What is happening in Kashmir nowadays is not only an incident, rather it is the fallout of state’s inaction against the erring security forces and their crimes against humanity which is committed under the cover of the draconian Armed Forces Special Powers Act (AFSPA). It’s because we accept each and every human rights violations, right from Kashmir to Chhattisgarh to the Northeast in the name of our national security; the political class eyeing vote bank has made us believe that we are not safe and it’s only because of the Kashmiris. The deaths of the Kashmiris by the hands of the army and police always fall on deaf ears with some among us even having the opinion that they need to be treated in even a worse manner because they are “anti-Indians”; in the environment of hyper nationalism such a notion is gaining ground very fast. Kashmir has seen nothing except days and nights of militancy and state led oppression since the last two decades.

Kashmir is sandwiched between the interests of the two powers of South Asia, both of them, fortunately or unfortunately, happen to be nuclear armed. It’s the Kashmiri awaam which has been bearing the brunt of such a large military deployment, which most of the Kashmiris feel is humiliating for them. It’s high time for both the South Asian powers to give an honest thought to Kashmir, Kashmiris and their problems, their plight. Their self respect is something which needs to be taken care off.

India is a diverse nation on various grounds but Kashmir is a diverse place as far as the level of opinions and violence is concerned. Every Kashmiri has a different point of view regarding India, Pakistan and azadi. But one thing is common among them, and that is the want to end the ordeals through which they have been passing for last 30 years, though the Kashmir conflict is much older if we re-look the previous chapters. They need peace and for a lasting one, the thing which is needed most is timely deliverance of justice and nothing else. There is a need for the Indian state to tell Nayeem Qadir’s parents that come what may justice would be done in favour of their “Gavaskar”, the cricketer son. Just a mere talk about justice is not going to solve the problem; it needs to be done honestly rather than in a partial and a biased manner.

No doubt Pakistan has been using Kashmir as its tool but there is a need for India to accept that Kashmir is not normal as we think, it’s a conflict ridden state which has seen thousands and thousands of deaths with various groups having different interests sharing their roles in making the valley what it has become. Both the state and non-state actors have in their credit, something which weakened Kashmir’s fortune.