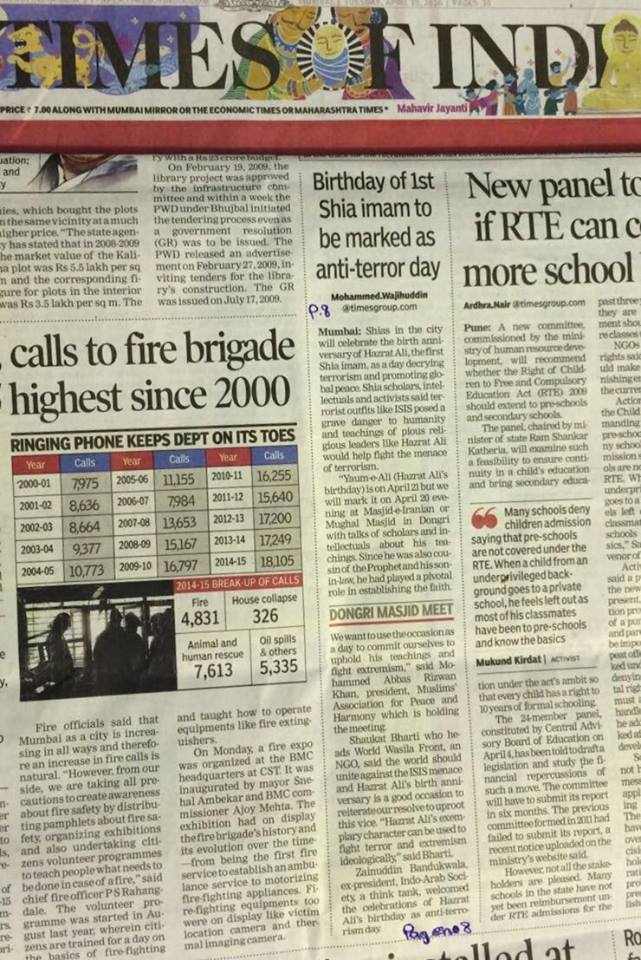 Imam Ali (as) was the first ruler to identify & annihilate the evil of terrorism. He fought the Kharjites in Battle of Islam at Nahrawan trying to eliminate this poison of “absolutism” and the practice of “cold blooded murder” of civilians in name of Allah, Quran and Islam.

Holy Prophet Muhammed PBUH said “Oh Ali you will fight a group of people who will fast all day & pray all night. These people will leave our ranks in the manner of an arrow when it shoots from its bow. They will recite the Quran with fervor and passion but its spirit will not go beyond their throats.” He was warning against those who would make religion into an ideology.

Kharajites who had refused to follow Ali to battle of Siffin gathered and chanted “La Hukam illallah” only” judge in all the matters of community including politics is Allah “There is no room for negotiations, arbitration and political settlement.

Ali delivered his famous speech which shows his philosophical approach to question of Language, text and humanity.

“The Qur’an is a book, covered, between two flaps, and it does not speak. It should therefore necessarily have an interpreter. Men alone can be such interpreters…..” (Nahj-ul-balaga, sermon 124)

The words of wisdom fell on deaf ears. Kharjites continued their loot and plunder killing innocent civilians in their Jihad against the tyrants [most of them were tyrants] until Imam Ali AS annihilated them in Neharawan.

This Wahhabi ideology followed by ISIS is an offshoot of Kharjites revived by Ibn Taymiyyah’s & later by Abdul Wahhab.