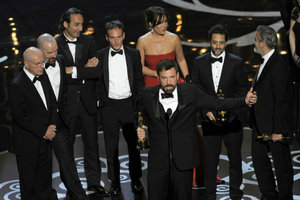 It was not my intention to write about the film “Argo.” I initially viewed it as another Hollywood movie that aimed to keep an audience on its toes through some combination of fact and fantasy, in order to cash in at the box office. It is, indeed, a well-made movie. However, when first lady Michelle Obama presented its director, Ben Affleck, with the Oscar for Best Picture at this year’s Academy Awards, it also communicated a more political message that the film was approved by President Obama himself. I then felt that I needed to make my views of the movie clear, particularly as it mentions me.

Near the start, the film correctly cites a quotation from me that I believed the Americans who were being held in the embassy would be freed very soon. That information was based on a conversation with Ayatollah Khomeini, in which he had said that they would be released within the following three to four days.

The movie, however, presents this statement in an atmosphere which gives viewers the impression that the Iranian government supported the occupation of the embassy and that I was a lone voice in opposing it. This could not be further from the truth.

Indeed, in the early days there was no talk of hostage-taking. The occupation was initially regarded as a short-term protest against the shah’s admittance to the United States, as the memory of the 1953 coup against Mohammad Mossadegh was still fresh in public memory. But as the event began to play a more important role in domestic Iranian and American foreign politics, the protest was transformed into a hostage-taking that lasted for 444 days and had catastrophic consequences for Iran, the US, and international politics.

Soon after the occupation of the embassy, Bazargan resigned and I became responsible for the Foreign Ministry for a short while. During this time, I called all the ambassadors from the European and North American countries and told them that the occupation of the embassy was in fact a strike against the Iranian government; it was we who were being held hostage. I asked them to help us end it.

Soon after, Iran had a presidential election. I openly opposed the hostage-taking throughout the election campaign, telling students that occupying an embassy in the heart of Tehran was a sign of cowardice rather than courage – that through revolution the Iranian people had forced US interference out the door, but that this act brought it back through a window.

By this time, the clergy who were struggling to control the state had begun to support the occupation. One of their leaders in the Islamic Republican Party, Hassan Ayat, criticized me for defining the hostage-taking as illegal, inhumane and illegitimate. Despite this, I won the election with over 76 percent of the vote.

Other candidates also were openly against hostage-taking, and overall, 96 percent of votes in that election were given to candidates who were against it. Hence, the movie misrepresents the Iranian government’s stand in regard to hostage-taking. It also completely misrepresents Iranians by portraying us as irrational people consumed by aggressive emotion, in contrast to the “Western” Americans, who were, as Edward Said once wrote, constructed as “rational, peaceful, liberal, logical” … etc.

We must ask why the film is based on this false dichotomy, and what political need is served by putting Iranians in such a bad light.

I was deposed in June 1981 as a result of a coup against me. After arriving in France, I told a BBC reporter that I had left Iran to expose the symbiotic relationship between Khomeinism and Reaganism.

Ayatollah Khomeini and Ronald Reagan had organized a clandestine negotiation, later known as the “October Surprise,” which prevented the attempts by myself and then-US President Jimmy Carter to free the hostages before the 1980 US presidential election took place. The fact that they were not released tipped the results of the election in favor of Reagan.

Two of my advisors, Hussein Navab Safavi and Sadr-al-Hefazi, were executed by Khomeini’s regime because they had become aware of this secret relationship between Khomeini, his son Ahmad, the Islamic Republican Party, and the Reagan administration.

Apart from this, I have a deeper concern about the way the film legitimizes clandestine CIA operations. The refusal of the CIA officer (Tony Mendez, played by Mr. Affleck) to abandon the plan to rescue the Americans hiding in the Canadian embassy in light of information that a military operation was under way is reminiscent of the first attempted coup against Mossadegh’s democratic government in 1953.

When this failed, the CIA asked its master spy, Kermit Roosevelt, to return to the US. He refused and, with the help of monarchists and some clergymen, organized a second successful attempt three days later. This coup ended democracy in Iran and replaced it with what was to become 25 years of the shah’s dictatorship. This resonance makes one wonder whether the film could ultimately, as some critics have suggested, “tilt the balance of U.S. public opinion toward war” should the ongoing nuclear negotiations fail.

The film has drawn public attention once again to this terrifying episode in both Iranian and US history. However, by falsifying, misrepresenting, and taking critical facts out of context, it delivers a pro-CIA message at the cost of both the Iranian people and Iranian history.

It does not help people understand that rather than being emblematic of the 1979 revolution, the hostage-taking enabled the forces of dictatorship we see today to overpower democratic struggles against the occupation of the US Embassy and all forms of violence in society. “Argo” may ultimately cost us even more time in securing a democratic future for Iran.