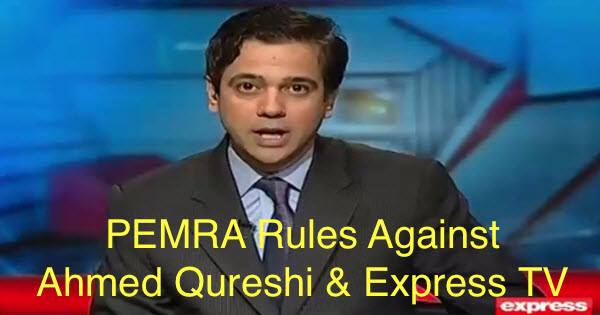 We won the case against Ahmed Qureshi and Express TV.

Several months ago, I charged Ahmed Qureshi and Express TV with defamation and hate speech. I took the case to PEMRA. Waqas Mir represented me brilliantly. The PEMRA Council of Complaints ruled in my favour and against Express TV and Ahmed Qureshi.

Here is the press release published today in The News “Hearing the complaint lodged by Dr Taimur Rahman, Assistant Professor Political Science LUMS, against programme titled “At Q with Ahmed Qureshi”, the council recommended issuance of a warning to Express News channel for airing content containing hatred against the complainant and leveling allegations without credible information and for not giving complainant a fair opportunity of self-defense while airing allegations against the victim and calling him directly or indirectly the enemy of Pakistan. The council also recommended issuing advice to all satellite TV licensees to strictly refrain from calling a person anti-Pakistan, traitor, anti-Islam, Kafir, enemy of Pakistan or using racial and religious discriminatory words etc. against any citizen of the state.” http://www.thenews.com.pk/…/101745-Pemra-wants-channel-to-b…

I especially want to thank the brilliant Waqqas Mir for representing my case pro bono. Although we would have liked PEMRA to issue stronger punitative damages on the channel and anchor; nonetheless, the fact that a government court has now declared me the victim of hate speech and defamation is itself a victory for progressive forces. I would also like to thank Marvi Sirmed who ran a brilliant civil society campaign to support me. She managed to get over 500 organisations to sign a petition against this defamation. Last but not least, I want to thank my wife Mahvash Waqar, my family, and my fans, friends, and comrades who stood by me through this difficult time and gave their time and effort to reverse the negative tide that was orchestrated against my work.

Dear Sabeen, I hope you are reading this from above.

p.s. Stand With JNU should also take the media clowns who aired doctored footage to court.

in January 2016 PEMRA issued a notice to Express News channel for airing a program, Q @ with Ahmed Qureshi on 3rd January in which the anchor attacked Sheikh Nimr by calling him a terrorist and defended Saudi Arabia’s decision to execute him, that caused anger and hurt the feelings of Shia and Sunni Muslim.