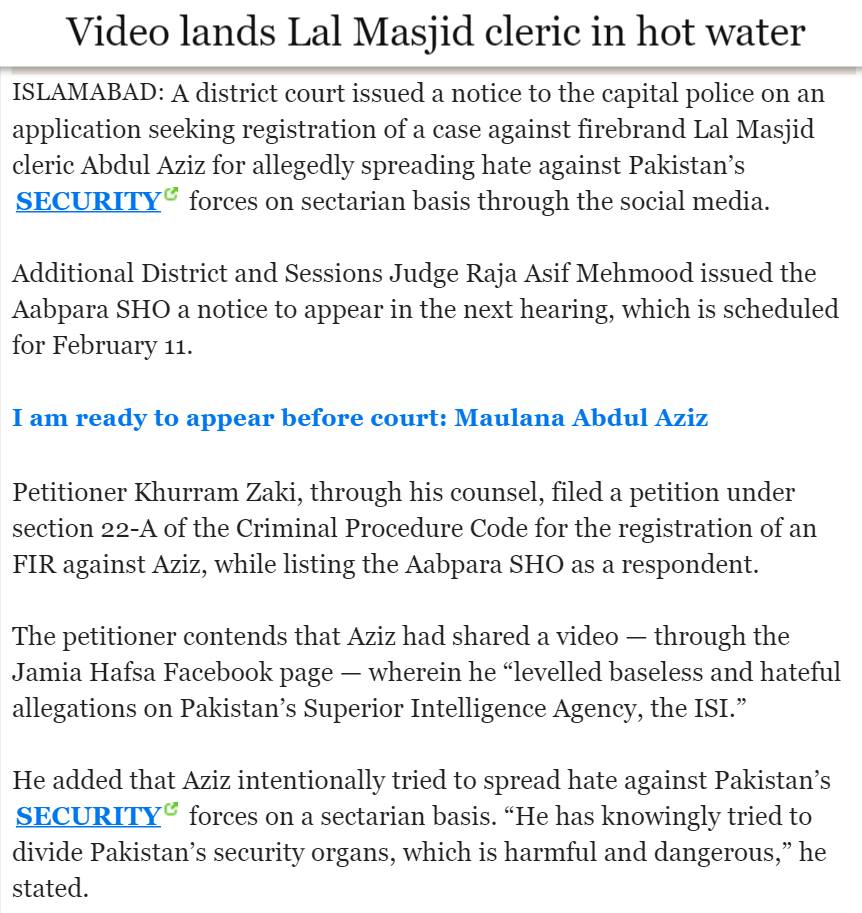 ISLAMABAD: A district court issued a notice to the capital police on an application seeking registration of a case against firebrand Lal Masjid cleric Abdul Aziz for allegedly spreading hate against Pakistan’s security forces on sectarian basis through the social media.

Additional District and Sessions Judge Raja Asif Mehmood issued the Aabpara SHO a notice to appear in the next hearing, which is scheduled for February 11.

Petitioner Khurram Zaki, through his counsel, filed a petition under section 22-A of the Criminal Procedure Code for the registration of an FIR against Aziz, while listing the Aabpara SHO as a respondent.

The petitioner contends that Aziz had shared a video — through the Jamia Hafsa Facebook page — wherein he “levelled baseless and hateful allegations on Pakistan’s Superior Intelligence Agency, the ISI.”

Zaki said that he filed an application for the registration of an FIR at Aabpara Police Station on January 29, but the police did not register a case. “The respondent is using delaying tactics for no reason,” he said.

He has prayed the court to direct the respondent to register an FIR.

On Feb 2, Aziz was granted pre-arrest bail in two criminal cases against two surety bonds of Rs50,000 each.

In those cases, registered with the Aabpara Police, Aziz and others are charged with blasphemy and violations of the Amplifier Act, and with criminal intimidation. Unusually for people accused under the blasphemy law, Aziz has not been kept in protective custody.