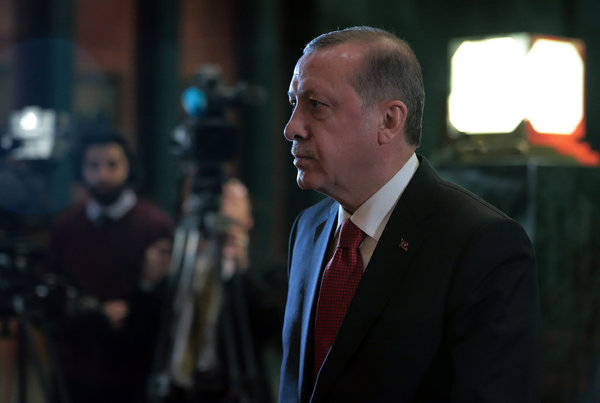 The New York Times editorial board did not need much effort in uncovering the real character of Recep Tayyip Erdogan, the most autocratic and despised leader of Turkey, who has, after being on the helm of his country as Prime Minister for almost 11 years, moved now to the ceremonial position of President. He is obviously restless because, according to that country’s parliamentary system and its constitution, the president has significant limits on his authority, and this does not sit well with Mr. Erdogan.

Mr. Erdogan has already adopted a grotesque and gruesome game plan which entails, first and foremost, changing the constitution, suppressing and massacring the Kurdish minority of 15 million into submission, continuing the infiltration of foreign fighters so as to create bloodshed and destruction in Syria and Iraq, and finally embarrassing both Russia and Islamic Republic of Iran before the Western powers and its gullible and poorly informed policy makers. Mr. Erdogan’s first two wishes that are part of his laundry list, have a better than even chance of going his way, however the Iranian, Russian and Syrian fronts will eventually become the cause of his political demise.

Mr. Erdogan, who came to power under the pretext of the so-called political Islam, which he stuffed down the throat of the Turkish populace that was already tired and troubled by that nation’s long and ludicrous secular ways. Once successful in his endeavour, he quickly brought economic reforms, incorporating a free market model that propelled Turkey to new heights. His Foreign policy, coupled with Turkey’s economic success enabled him to assert that Turkey was a powerful nation with zero problem with its neighbours, thus claiming the mantle of leadership in that region.

The cycle of Mr. Erdogan’s downfall began with his arrogant and foolhardy adventures, first in Egypt, where he was able to influence the rise of Muslim Brotherhood, and then was forced to witness their horrific and humiliating fall from the grace. He then decided to mastermind the most dangerous plan to topple his once best friend Bashar al-Assad, president of Syria, from power on the urging of the Salafi establishment of Saudi Arabia and its underlings in the Gulf States. His assumed role as the chief instigator of Syrian crisis was simply a payback to the Salafi establishment for his illicit interference in Egyptian affairs, for which, they rewarded Turkey with a membership in the Salafi League.

Mr. Erdogan’s endless lust for power and his sickening suggestion which alludes that Adolf Hitler’s dictatorship in Germany was ample justification for his evil intentions, manifest the mind-set of a man who, for the sake of personal gain, is determined to destroy the political, social and economic fibre of his proud homeland. Turkish society and its innocent citizens have began to face chaos, and frequent mayhem causing bloodshed, and its economy, now in shatters as a result of retaliation by Russia, and a few angry neighbours. Mr Erdogan, captivated by his brazen and blind ambitions, seems to be incapable of stopping the downward spiral of his once majestic power. And the holes, he had dug against his opponents, during the past years, are waiting for his ultimate fall.