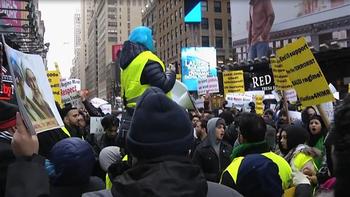 A demonstration in the US city of New York has condemned Saudi Arabia’s recent execution of top cleric Sheikh Nimr al-Nimr, as well as Nigeria’s detention of senior cleric Sheikh Ibrahim Zakzaky.

Hundreds of activists gathered at New York’s Times Square on Sunday to censure the kingdom’s execution of Sheikh Nimr, and Nigeria’s detention of Sheikh Zakzaky.

The protesters chanted slogans against the Saudi government as well as the Daesh (ISIL) militant group.

A number of speakers addressed the crowd, among them a young girl, calling for peace and unity among all Muslims, while condemning the Saudi oppression.

Sheikh Nimr was among 47 people executed on 2 January at the hands of the Saudi regime after being convicted on “terrorism” charges.

He was a vocal critic of the regime in Riyadh.

Protesters also demanded the release of prominent cleric and the leader of the Islamic Movement of Nigeria (IMN) Sheikh Zakzaky.

Zakzaky has been in police custody since Nigerian forces raided his home on December 13 and arrested him after reportedly killing those attempting to protect him, including one of the movement’s senior leaders and its spokesman.

The Shia cleric is said to have been charged with “criminal conspiracy and inciting public disturbances.”

The demonstrators also blasted the US government over its silence on Nigeria killings.

Now Keith Preston, chief editor and director of attackthesystem.com says, “The American regime couldn’t care less about the protection of human rights. Instead, human rights is a rhetorical trick that is often used by the American regime as a means of attacking its officials enemies and creating a smokescreen for various forms of military or economic or diplomatic pressure that’s exercised against other regimes.”

He said the United States supports Saudi Arabia and Israel and turns a blind eye to their human rights violations since such regimes are close American allies.