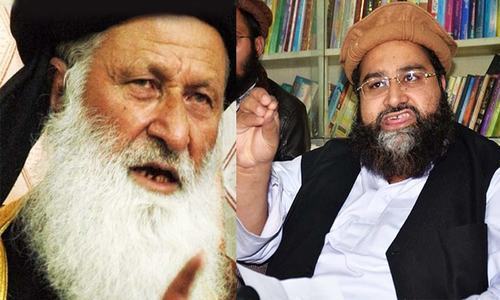 The Senate witnessed impassioned speeches on Tuesday when discussion on three annual reports of the Council of Islamic Ideology turned into a debate on the question of very existence of the CII.

Members of the JUI-F, who appeared to have come to the house well-prepared, pointed their guns towards the PPP when Farhatullah Babar raised question on the constitutional and legal status of the CII and Sassui Palejo criticised its members for focussing only on women and marriage issues.

Four out of five senators of the JUI-F, which at present has the CII chairmanship, took part in the first of its kind debate in the Senate and called for implementing the council’s recommendations.

Mr Babar said the task assigned to the CII under the 1973 Constitution had been completed and submission of annual reports was no longer a constitutional requirement.

The PPP senator said the CII in its report had itself admitted that after the submission of its final report in December 1996, it was no longer constitutionally required to continue submitting reports to parliament. However, he said, the council unilaterally decided to keep submitting annual reports. He requested the chairman to refer the matter to the law and justice committee.

He said the Federal Shariat Court was tasked to examine and could even strike down any law on the touchstone of whether it was Islamic or not. “Then what was the need for CII and its reports?”

He said the council had made some controversial pronouncements like rejecting a bill for establishing homes for the elderly terming the idea against the norms and traditions of society and the Women Protection Bill and declaring DNA test unacceptable as primary evidence in rape cases.

Some time ago, he said the council first approved the draft of a resolution recommending amendment to the blasphemy law to discourage its misuse but soon the hardliners joined hands and struck down the proposed resolution.

Back in 1978, he said, the CII had recommended that words ‘Allah-o-Akbar’ should be inscribed on the national flag to inspire people for Jehad. “Not surprisingly, the flag of Taliban bears these symbols and they have been carrying out what they call Jehad,” he added. “Recommendations such as these demonstrate how dangerously conservative and out of touch with the times the CII is,” he said.

Chairman Raza Rabbani turned down the request to refer the issue to the law committee, stating the Constitution did not say that the CII would stand abolished after submission of its final report which it was required to submit within seven years of its existence in 1973.

Maulana Abdul Ghafoor Haideri described the remarks of Mr Babar as “disrespect” to the CII which was a constitutional institution.

Abdul Qayyum of the PML-N said if people were not satisfied with the performance of the CII, it could be restructured, but it should continue to function.

JUI-F’s Hafiz Hamdullah in his emotional speech directly attacked the PPP, saying those who could not recite Surah Ikhlas were talking about CII’s abolition. He said if on the basis of performance someone was questioning the need for the council, then tomorrow someone could say that there was no need for the election commission, the Supreme Court or the FIA.

The JUI-F senator said the CII talked not only about the rights of women but also the rights of children and even the eunuchs and wanted to see an end of women’s exploitation.

“Islam cannot be eliminated from the Constitution. And for it, we can give our lives and take others’ lives,” he said.

An interesting exchange of dialogue took place between Hafiz Hamdullah and the Senate chairman when the former in his speech mentioned Indian actress Sushmita Sen. When Mr Rabbani said it showed that he watched the Indian actresses the JUI-F senator said he not only watched them but also “listened to them and learn from them.”