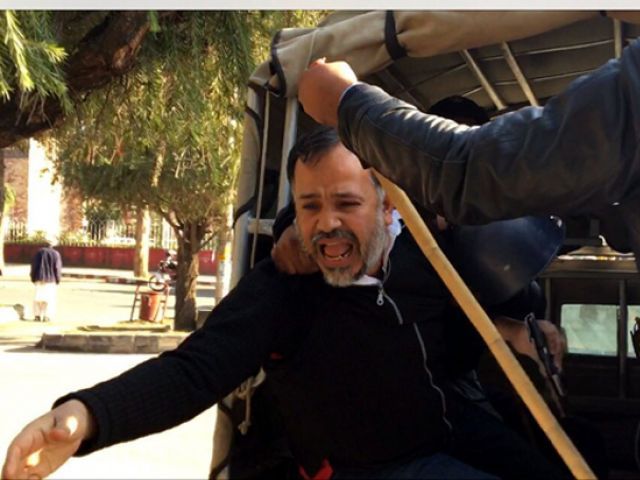 ISLAMABAD: A civil society protest on Wednesday against radicalism, held outside Lal Masjid, was disrupted.

After police officials rounded up a number of protesters, who were shouting slogans against the controversial mosque cleric.

The activists were issuing ‘reminders’ directed at Lal Masjid cleric Abdul Aziz that the nation stands united against the gruesome attack on Army Public School in Peshawar and has not forgotten his now-infamous statement days after the attack, where he refused to recognise the victims as martyrs or refer to the attackers as terrorists.

The gathering remained peaceful until it was disrupted by the police, who claimed to be taking protesters into protective custody to maintain law and order.

The city administration had initially tried to persuade the organisers of the protest to change the venue. After failing to do so, the police took them to Aabpara Police Station and released them after a while.

Khurrum Zaki, a rights activist, had come with his wife and teenage daughter. They were joined by roughly half-a-dozen other activists in front of Lal Majid at around 2pm. They chanted slogans against terrorist sympathisers and demanded the arrest of Aziz.

The police were already present there, cordoning off the mosque.

“The administration never tried to stop the protesters. They were allowed to peacefully protest,” said Islamabad Deputy Commissioner (DC) Capt (retd) Mushtaq Ahmad. He said he had ordered the police to refrain from arresting the protesters.

He said when he got to the site, the police were trying to push protesters away from the mosque’s entrance.

“No one was arrested from the site,” the DC added.

A police spokesperson repeated the claim. “No arrests have been made at the site”.

Following his remarks last year, Aziz faced a series of protest demonstrations staged in front of the mosque by to decry his statement. At the time, protesters also demanded that the government arrest him for openly supporting and sympathising with terrorists.

Following the protests, an FIR was also registered against the cleric, but, he free remains free and has recently re-launched a campaign to have Sharia law imposed in Pakistan through a petition filed in the Supreme Court on Tuesday. The first hearing is scheduled for Thursday (today).

“We gathered there. It is our fundamental right under the constitution,” said Khurrum Zaki, the organiser of the protest. We were demanding the implementation of the National Action Plan, which calls for strict action against terrorist sympathisers, facilitators and supporters, Zaki said.

He said Lal Masjid had already pledged its support for the Islamic State (IS) militant group, while the mosque continues to produce hate speech.

“Even my 16-year-old daughter was arrested by the police. The policemen also tortured my wife and other protesters,” Zaki said.

“If you can’t arrest terrorists sympathisers, at least don’t stop us from protesting against them,” Zaki said.

He alleged that the police were protecting self-declared enemies of the state and its institutions. He rebutted the police and administration claims that protesters were getting too close to the mosque’s entrance, saying that they remained at a greenbelt along the road running past the mosque.

Meanwhile, in late development, Interior Minister Chaudhry Nisar Ali Khan has ordered an inquiry into the conduct of policemen deputed outside the mosque. In a statement, the interior ministry said that any police officials found guilty of torturing the protesters would be suspended.