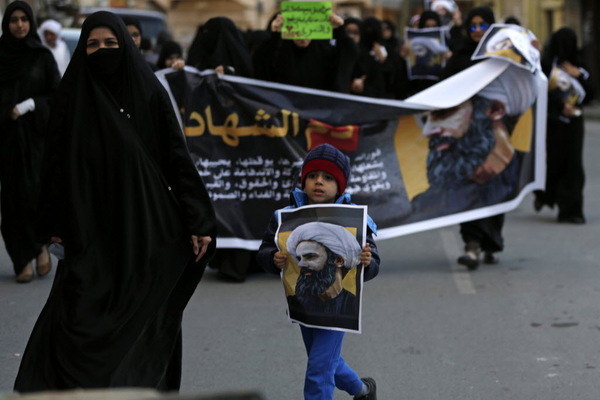 Since the failure of the Arab Spring in 2011, proponents of peaceful protest in the Middle East have fallen on hard times. The violent acts of Islamic State, and the military response of many governments against it and other terrorist groups, have dominated the region’s attention. Yet on Jan. 2, a prominent advocate of nonviolent protest, the Shiite cleric Nimr al-Nimr, was executed in Saudi Arabia. While his trial was deeply flawed and his killing tragic, what is notable was the relatively peaceful reaction, or what the cleric might have wanted  – an effort to affirm Islam as a religion of peace.

His family called on Muslims to “adopt peaceful means when expressing their anger,” as a way to follow his example. In Iraq, Prime Minister Haider al-Abadi tweeted his sadness over the execution but wrote that “peaceful opposition is a fundamental right. Repression does not last.”

Even in Iran, whose Shiite regime is in a power struggle with the Sunni monarchy of Saudi Arabia, President Hassan Rouhani condemned a group of Iranians that attacked the Saudi embassy in Tehran. ‘‘It is unjustifiable,’’ he said.

In 2011, Mr. al-Nimr became known as the voice for peaceful protests by Saudi Arabia’s minority Shiites against the kingdom’s harsh rule. He was later convicted on charges that Amnesty International called “unfair.” His civic resistance helped put a mirror up to the Saudi royal family’s nondemocratic rule and injustices.

Almost all of the world’s 1.5 billion Muslims favor peaceful means to resolve disputes, simply by the way they live. But when repressed by tyranny or the false lure to join a violent jihadi group, they are often forced to make a conscious choice and stand up for nonviolent tactics. Since the arrest of al-Nimr, the Shiite scholars in eastern Saudi Arabia have reaffirmed their commitment to peaceful change as citizens of the country. In a 2014 statement, they said, “Communities in this era have been suffering from radical groups and trends that practice violence and terrorism under the pretext of religion and politics. Religion condemns terrorism and political violence destroys nations.”

Such active pacifism needs more notice as the Middle East deals with the challenge of Islamic State or with a shift within the region-wide Muslim Brotherhood to resort to violence after the military crackdown in Egypt.

In 2011, the Nobel Peace Prize was given to a prominent nonviolent proponent in Yemen, Tawakkul Karman. Last year the Prize went to a quartet of groups in Tunisia for their “peaceful political process at a time when the country was on the brink of civil war.” In addition, many Muslim communities have stepped up to push for peace and respond to evil with good. The Dawah movement, for example, proselytizes to Muslims to follow nonpolitical spiritual paths. In Indonesia, a large Muslim organization called Nahdlatul Ulama is reaching into the Middle East with an interpretation of Islam that advocates nonviolence, compassion, and acceptance of other religions.

Peaceful means to achieve a social good against a ruler’s violent misrule cannot be done for the sake of expediency but as an expression of patience, love, and strength.  Those who knew of al-Nimr’s sermons on nonviolence also knew how to react to his execution. That should help make the Middle East more peaceful.