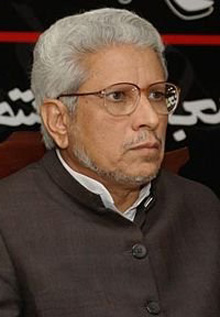 Over the last few months I have heard all the lies that Javed Ahmed Ghamidi is saying in US, Australia and Malaysia. My interest in him was for two reasons, first I knew him from my college days and was well aware of his salafi and wahhabi views.

Although I never considered him even a joker like Zakir Naik or Tariq Jameel. He was considered as the Ghilman of Islahi like other deobandi molvis including Dr. Israr and Maududi.

Secondly, I was really suspicious of his activities since Musharraf  days when he started his TV program with a lady sitting in front of him. I gave him the title of Rangeela Molvi back then.

In the past couple of years when he started selling the new “choran” of ‘counter-narrative’, I realised that he is the new Maududi with the plan to destroy next generation of Muslim youth particularly living in West.

It is important to understand that Ghamidi is a hardcore wahhabi extremist molvi but has special permission to practice doctrine of best deception at the highest level. In the last couple of years he has been using the smoke screen of counter narrative to preach the hateful ideology of Islamism.

In all of his lectures series he spends hours and hours praising wahabi deobandi ideology and proving that this hateful ideology is the current and real Islam. From ibn-e-Tamyia to Maududi he establishes that wahabi/deobandi ideology is the true Islam. And then he spends few minutes mumbling about his counter-narrative in such a way that basically says follow the real Islam which I have explained in hours. His counter narrative simply means that he needs the educated, rich terrorists who could take the terrorism to next level.

I am afraid that Malaysia is going to be the next center of extremism.