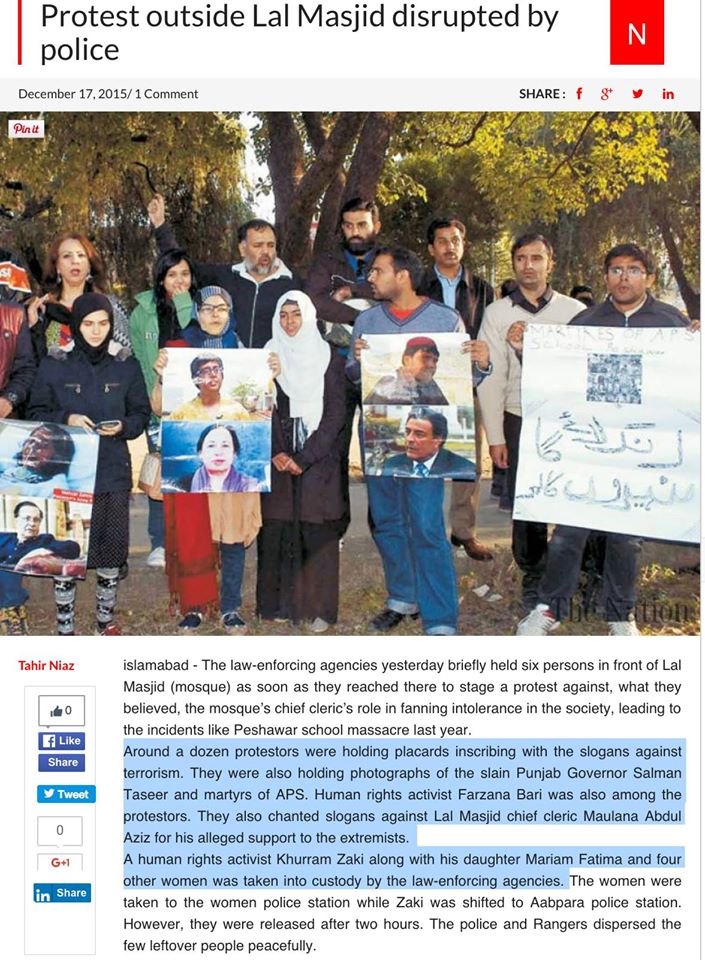 islamabad – The law-enforcing agencies yesterday briefly held six persons in front of Lal Masjid (mosque) as soon as they reached there to stage a protest against, what they believed, the mosque’s chief cleric’s role in fanning intolerance in the society, leading to the incidents like Peshawar school massacre last year.
Around a dozen protestors were holding placards inscribing with the slogans against terrorism. They were also holding photographs of the slain Punjab Governor Salman Taseer and martyrs of APS. Human rights activist Farzana Bari was also among the protestors. They also chanted slogans against Lal Masjid chief cleric Maulana Abdul Aziz for his alleged support to the extremists.
A human rights activist Khurram Zaki along with his daughter Mariam Fatima and four other women was taken into custody by the law-enforcing agencies. The women were taken to the women police station while Zaki was shifted to Aabpara police station. However, they were released after two hours. The police and Rangers dispersed the few leftover people peacefully.
Talking to The Nation, Khurram Zaki said that last year’s attack on the Peshawar school was the reason to protest outside the Lal Masjid. “Lal Masjid had openly supported the attack which claimed over 140 lives… An FIR was lodged against the chief cleric Maulana Abdul Aziz but no action was taken against him despite passage of one year,” he said while narrating reasons to protest outside the mosque. The demonstrators were arrested under the threat of disturbing peace and order. Contingents of Rangers and local police were deputed to guard Lal masjid after the civil society announced protest.
Maulana Abdul Aziz had declined to condemn the Peshawar massacre last year, inviting ire from the civil society, politicians and other segments of the society. Civil society protested the statement by Maulana Abdul Aziz in which he refused to condemn the massacre of students and teachers in the terrorist attack on Peshawar school. A first information report was registered against Lal Masjid’s chief cleric Maulana Abdul Aziz at Aabpara police station upon the pressure exerted from protesting civil society last December but later no action was taken by police.
On the other side, strict security arrangements were made at the entry and exit points of the city as the people mourned the first anniversary of the Peshawar massacre. Search of suspects continued at the check points as the security was put on high alert in the federal capital. Red Zone was special focus of the law-enforcing agencies. Entry and exit points of the Red Zone were sealed to restrict entry of common persons.