Home  »  Newspaper Articles   »   Adil Msood Butt, the ISIS-affiliated Deobandi terrorist, arrested in Karachi for his role in the massacre of Ismaili Shia Muslims 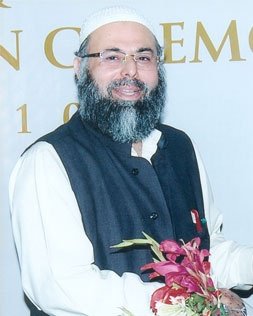 KARACHI: – Vice Chancellor (VC) of a private university was arrested from Clifton area Friday for allegedly facilitating the terrorists. The VC has been allegedly funding Al-Qaeda from personal account and was also a business partner of the terrorists involved in Safoora tragedy. The VC confessed to the charges of links with Al-Qaeda and funding the terrorists during the interrogation. The VC also revealed that he is a business partner of the terrorist involved in Safoora tragedy Saad Aziz aka Tun Tun aka Jaan. He further confessed that the arrested members have also established a network in the educational institutions.

Police then  proceeded to arrest 3 of Butt s partners. Mutfi Tauseef was arrested from Defence, Saleem Ahmed from Baloch Colony while Salman was apprehnded from Mehmoodabad.

According to sources, Adil Masood Butt fell into the hands of the Counter Terrorism Department (CTD) during a raid in the university. Butt was identified by arrested Al-Qaeda terrorist Khalid Yousuf Bari during interrogation by the Joint Investigation Team (JIT). Evidence have also been found from Adil Masood Butt’s bank account in this regard.

During a press conference, CTD In-charge Umar Khitaab in a shocking revelation further informed that this network of suspects also inlcuded 20 women while arrested Al-Qaeda terrorist Khalid Yousaf Bari s wife was the leader of this group of women. Their job was to brainwash people. The CTD In-charge further informed that the group of women had gone into hiding after the arrests were made.

According to the CTD In-charge, Bari was a former engineer for Pakistan International Airlines (PIA) and he has been linked to Al-Qaeda Karachi s chief Umar Jala aka Chandio.

Highly qualified terrorist aides are being located and arrested quite frequently in the country these days for allegedly funding terrorists.

It is not the first time that highly educated people have been found involved in terrorist activities. Earlier, Sabeen Mahmud’s murderers were also educated from some of the top universities of the country.

KARACHI (Staff Report): A Vice Chancellor of a private college in Karachi was arrested by counter-terrorism department (CTD) of police from Clifton area in connection with May 2015 Safoora carnage, officials said.

The suspect, Adil Masood Butt, was the Chief Executive of College of Accounting and Management Sciences (CAMS) and a member of its Board of Directors.

The suspect, it is revealed, is a facilitator and business partner of Saad Aziz, who is the prime suspect in Safoora attack case.

He was reportedly in contact with attackers of Safoora attack, which left some 50 members of Ismaili Shia community dead.

“Adil Masood Butt is an educated person who set up the college with the help of his friends in 1994,” he said. The suspect was handed over to police under anti-terror act for a period of 90 days for interrogation.

“He got his education from Saint Patrick and Saint Paul and did his MBA from the United States,” he said.

According to Umar Khattab, Adil Masood Butt used to brainwash young women and men to join terror group in the name of Jihad. He said that no woman member of the group could be arrested yet.

“We are carrying out raids to arrest women members of the group,” he added. – NML