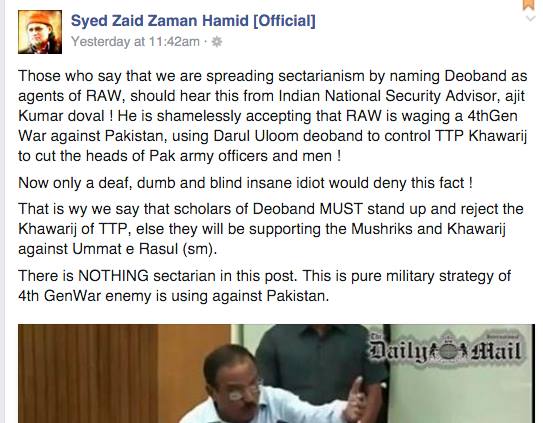 Those who say that we are spreading sectarianism by naming Deoband as agents of RAW, should hear this from Indian National Security Advisor, Ajit Kumar Doval.

He is shamelessly accepting that RAW is waging a 4thGen War against Pakistan, using Darul Uloom deoband to control TTP Khawarij to cut the heads of Pak army officers and men!

Now only a deaf, dumb and blind insane idiot would deny this fact !
That is wy we say that scholars of Deoband MUST stand up and reject the Khawarij of TTP, else they will be supporting the Mushriks and Khawarij against Ummat e Rasul (sm).

There is NOTHING sectarian in this post. This is pure military strategy of 4th GenWar enemy is using against Pakistan.

Entire Pakistani nation needs to be united against Takfiri Deoandi Khawarij of TTP, LeJ, ASWJ and their numerous aliases and affiliates.