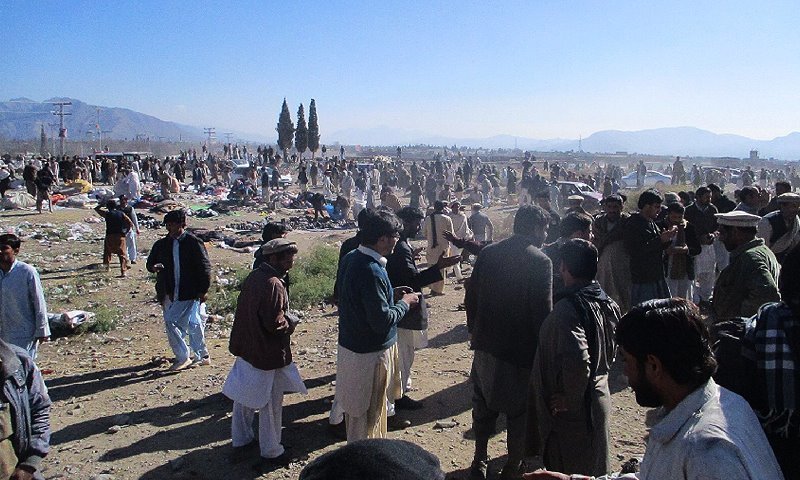 PARACHINAR: At least 15 people were killed and dozens others wounded on Sunday in a blast at a used clothes market in Kurram Agency’s Parachinar area.

Hospital sources told DawnNews that 47 people were injured as a result of the blast out of which more than 15 victims are in critical condition.

The market was bustling with people who were out shopping for clothes. As winter season arrives locals throng lunda (used clothes markets) bazaars to buy used and second-hand clothes.

It is currently unclear whether the blast was a suicide attack or a remote-controlled blast. Security forces have cordoned off the area and are investigating the nature of the blast.

No individual or group has claimed responsibility for the attack yet,

Security sources said that the explosion was carried out through a planted device and that two suspects have been taken into custody from the blast site.

Earlier, rescue and emergency teams rushed to the blast site and shifted the dead and wounded to District Headquarters Hospital (DHQ) Parachinar.

An emergency has been imposed at DHQ Parachinar.

Kurram is one of the most sensitive tribal areas as it borders three Afghan provinces and at one point was one of the key routes for militant movement across the border. It has witnessed scores of such attacks and kidnappings for ransom incidents in the past several years.

The agency is adjacent to North Waziristan where Operation Zarb-i-Azb is in progress against the Tehreek-i-Taliban and other insurgent groups. The military had also launched an offensives against militants in 2011.

Parachinar is the administrative headquarters of the agency near the Afghan border.

It is small garrison town developed by the British Army in the foothill of Spin Ghar (White Mountain) in mid-1895. The town total population is about 40,000 comprising people of different tribes, races and faiths.