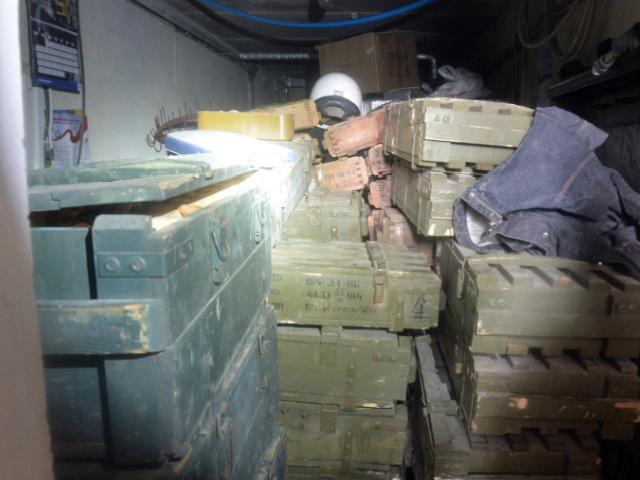 The Greek coastguard has seized a ship loaded with thousands of undeclared, carefully concealed weapons, and possibly explosives, en route from Turkey to Libya. Local media claims the ship is linked to Islamic State (IS) and to companies who have previously smuggled goods to Syria – the Turkish foreign minister denies this.

The ship had come from Alexandretta in Egypt on to the Turkish port of Iskenderun, and was bound for the Libyan port of Misrata – a stronghold of the Muslim Brotherhood-linked group “Libya Dawn.”

It was raided on Tuesday 20 nautical miles off Create and has now been escorted to the port of Heraklion where searches began on Wednesday. The ship flies under a Bolivian flag, but its seven-member crew are thought to be from Syria, Egypt and India.

Greek language website kathimerini.gr claims the firm who are registered as owning the ship were identified by American arms trafficking researchers Odessa Network as making nine shipments to Syria in 2012, possibly from Russian and Ukraine.

There is currently an arms embargo on Libya, which is embroiled in a complex, sectarian civil war with groups affiliated to IS controlling large areas. According to documents believed to be from IS and released by the The Quilliam Foundation, the terror group plans to use Libya as a gateway into Europe.

The local coastguard has confirmed the ship “was carrying arms without legal documentation,” but refused to say which weapons when questioned by Reuters. However, local Greek media described the ship as “carrying containers with weapons and explosives.”

Greek website news.in.gr has dozens of photos of the vessel. Its cargo appears to include containers stuffed full of guns, boxes of ammunition and miscellaneous bags. Heavily armed Greek Special Forces stand guard around the cargo.

The website says the seizures include “pallets with boxes containing a total of 491,950 bullets of 9mm, and about 5,000 weapons (shotguns police type) whose counting still continues.”

Adding: “The weapons and ammunition were carefully hidden behind simple load (drawers, cupboards and plastic gymnastic mats) deep into the container,” and were not mentioning on any of the documentation on board the ship.

A Turkish foreign ministry spokesman confirmed the cargo included weapons but said it was fully documented and was destined for the Sudanese police force. The vessel was also carrying building materials for Libya, he said.

“If investigations by the Greek authorities show that the consignment is going to receivers other than those stated in the documentation, and if that is shared with us, naturally measures could be taken,” foreign ministry spokesman Tanju Bilgic said.