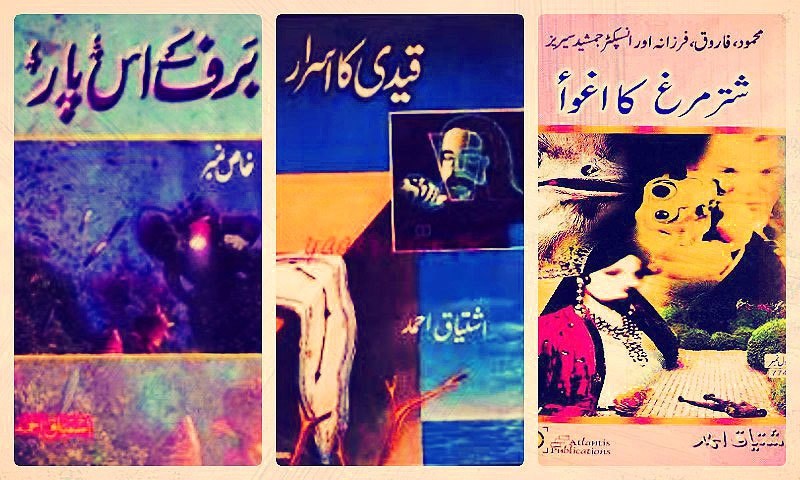 A few days ago, I read about the demise of Urdu novelist Ishtiaq Ahmed. I was introduced to him in the early days of my childhood when I had just discovered the pleasures of reading.

My uncle, who was himself in high school, once brought home a novelette by the author. It was about the adventures of a certain Inspector Jamshed and his battery of friends. I was instantly hooked!

Soon I had read most of his books in the series, although I very quickly weaned out of his brand of adventurism and turned to other fields of study.

Ishtiaq Ahmed was one of the most influential Urdu writers of recent times. His novels were to Pakistani youth in the 80s and 90s what Harry Potter is to a lot of kids today.

He started writing in 1973, but his popularity soared in the late 80s, and by the time of his death he had written more than 800 Novels. There are many fan groups still dedicated to him on Facebook and a large number of the 80s kids that I know reminisce about the stories of that era.

He had created many larger than life characters such as Inspector Jamshed, Kamran Mirza, Mehmood, Farzana, Shoki brothers and Farhat. The stories were a mix bag of conspiracy theory, patriotism, crime, mystery and voodoo science.

Perhaps the most persistent theme among the novels was how the Ahmadi community kept hatching ‘diabolical’ plots against Islam and Pakistan.He also targeted the Shia community as well.

Where did this these plot lines emerge from?

In Pakistan, the rise of fundamentalism was not a result of a military regime bent on Islamising the society or the outcome of our indiscretions during the Afghan war. The seeds were sown long before in the shape of the Pakistan resolution, the 1953 Lahore riots, the 1965 defeat of the liberal Fatima Jinnah, the 1974 declaration of Ahmadis as non-Muslims and the 1977 prohibition of alcohol.

These attempts by a beleaguered religious majority were to reclaim what they believed was lost by the secularisation of the state, first under British rule and then by ’brown’ rulers. The Zia regime merely exploited the trend, using it as official state narrative.

The 80s: Change of mindset, change of publications

This time saw the biggest trend in this reversal towards fundamentalism.

Mosques were increasingly being converted, the school syllabus was redesigned, the media was regulated and the mindset actively changed.

Any opinion of dissent was silenced either through censorship or plain arm twisting. Many influential writers of the time like Faiz Ahmed Faiz or Ahmed Faraz were either put behind bars or chose exile. Books of liberal thoughts suddenly went missing from the markets.

The vacuum created by this dearth of intellectual excitement was filled by a new genre of popular fiction. There were various trends; at one end was the Islamisation of history, which thanks to the various ‘Islamic digests’ and novels revisited history and dug out heresies or conspiracies against Islam from its early days or from hundreds of years ago.

Then came the ‘science digests’ that would explore anything from evidence of djinns, prophesies of doomsday in the ancient pyramids and justification of animal slaughter using steel blades.

Finally, the last variety consisted of spy books, in which Ishtiaq Ahmed played an important part.

Ishtiaq Ahmed, Mazhar Kaleem B.A., Naseem Hijazi, A Hameed, Tariq Ismail Saghar and many others represented a populist culture based on a concept that the world is ‘out there to get us’, that there are conspiracies being hatched against this poor nation and that one must be watchful of any foreign elements.

Graduating from Ishtiaq Ahmed’s works, one would often go on to read the more serious Mazhar Kaleem BA, then A Hameed and finally to Tariq Ismail Saghar. If embalmed with the new found evangelism of the Tableeghi Jamaat, young devotes would soon turn into a Maududi or a Syed Qutb or Sheikh Baaz.

The more ‘educated’ minds would go on to find other parallel truths like Freemasons, Illuminatis, Protocols, Jewish Hegemony and CIA/Mossad/Raw connections.

I remember that after 9/11, a rather liberal friend of mine explained the context of the date. He said in Freemasonry there were 10 levels. The 9th for the people, and the 10th for God. By choosing 9/11, the Freemasons are hinting that we will not let God rule the world and from the 9th level (Democracy) we will go directly to 11th level (Satanic Rule). And yes, this friend was a fan of Ishtiaq Ahmed in his early years.

It would be fair to say Ishtiaq Ahmed was among those writers who helped shape the volatile society that Pakistan has become. Impressionable young minds soaked up his narrative of history and grew up believing in a world where things are not always as they may seem.

These were the books that shaped the current mindset, which believes every natural calamity may be an act of sabotage by Satan; every famous divorce a Jewish plot and every political turmoil a conspiracy hatched by a Masonic lodge or one of our minorities.

If we are to understand the mindset of today’s generation, we might want to look back at what happened in the 80s and the 90s in Pakistan. This is the only way we can learn from history and hopefully stop it from repeating itself.