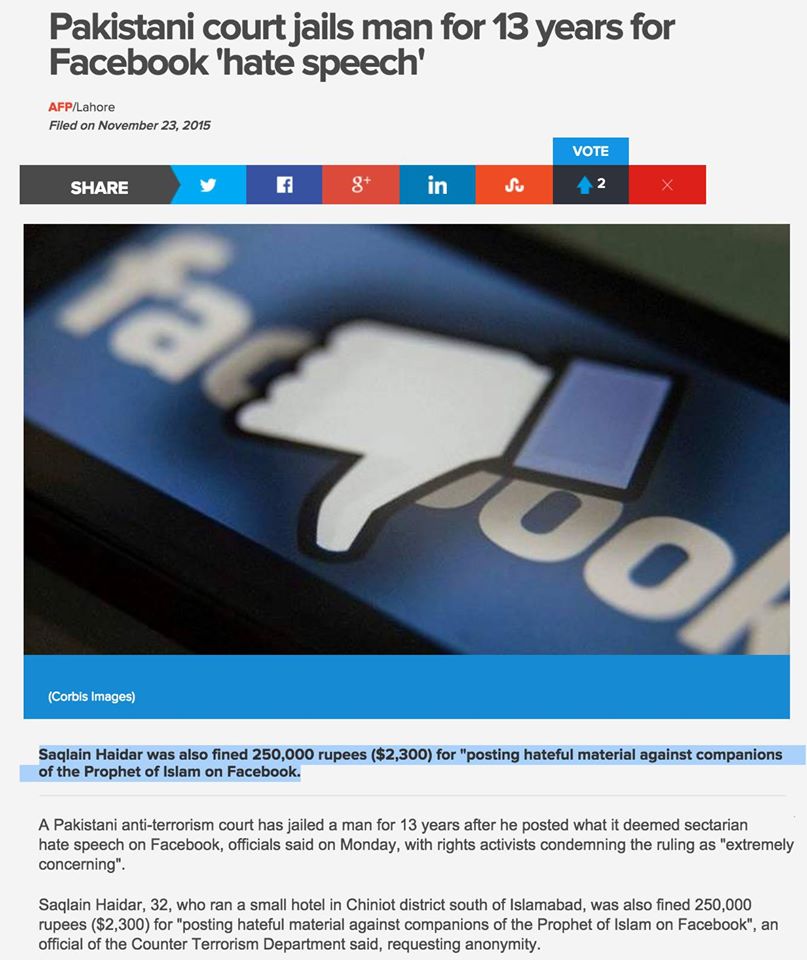 In 1998 an entire Christian locality, Shantingar, was attacked and burnt by the Sipah Sahaba aka ASWJ. This locality was attacked based on blasphemy allegations when the motive was to actually grab property of Christian Pakistanis. In November of 2014, a Christian couple and a Shia man were brutally hacked to death on similar allegations. Just last week, after a concerted campaign by radical clerics, an Ahmadi mosque was forcibly occupied and a factory owned by an Ahmadi was burned down.

In most of these cases, the evidence was scant and the motive was to settle personal scores and grab property at the cost of targeted communities.

Now a Shia man has been handed a draconian sentence based on allegations that a Facebook account that may have belonged to him posted objectionable material. This is the most flimsiest of evidence and has been met with an unimaginably harsh sentence. While ASWJ clerics inciting murderous violence on public loud speakers are given 6-month sentences, then why is this Shia individual being punished so harshly for a crime he may not have even committed.

The story, as reported in the papers, is twisted as if the guy who is punished belongs to a Takfiri group and is preaching hatred against other sects!. However just read it carefully, they (newspapers) have tried their best to obfuscate the identity of the guy and spin the story such that deliberate confusion can be created.

Even the so-called ‘NGO’ avoided to comment as they ‘did not know the specific of the case’ and then the reporter made a deliberate twist by referring to “Tahreek-e-Taliban” so that people get the impression that the guy might be an extremist Taliban.

All those who oppose the Blasphemy law, value Free speech and oppose such a draconian, disproportional and biased ruling must protest this.