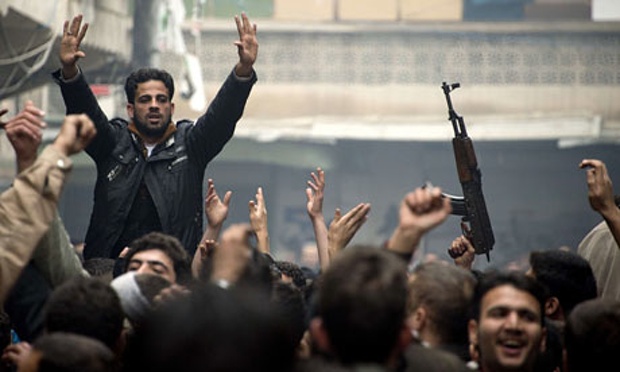 France has emerged as the most prominent backer of Syria’s armed opposition and is now directly funding rebel groups around Aleppo as part of a new push to oust the embattled Assad regime.

Large sums of cash have been delivered by French government proxies across the Turkish border to rebel commanders in the past month, diplomatic sources have confirmed. The money has been used to buy weapons inside Syria and to fund armed operations against loyalist forces.

The French moves have stopped short of direct supply of weapons – a bridge that no western state has yet been willing to cross in Syria. But, according to western and Turkish officials as well as rebel leaders, the influx of money has made a difference in recent weeks as momentum on the battlefields of the north steadily shifts towards the opposition.

Some of the French cash has reached Islamist groups who were desperately short of ammunition and who had increasingly turned for help towards al-Qaida aligned jihadist groups in and around Aleppo.

One such group, Liwa al-Tawhid, an 8,000-strong militia that fights under the Free Syria Army banner, said it had been able to buy ammunition for the first time since late in the summer, a development that would help it resume military operations without the support of implacable jihadi organisations, such as Jabhat al-Nusra, which is now playing a lead role in northern Syria.

The French newspaper le Figaro reported this week that French military advisers had recently met with rebel groups inside Syria, in an area between Lebanon and Damascus, in further evidence of efforts by Paris to step up pressure on president Assad.

France has suggested that rebels should be given “defensive weapons” to use against the regime and was the first country to recognise a recalibrated political body as the legitimate voice of he Syrian people.

France has given a steady flow of humanitarian aid in recent months, including funds to rebel-held parts of Syria so that these “liberated zones” could begin to restore infrastructure and services for civilians. In September, the French defence minister stressed France was not providing weapons.

Foreign Secretary William Hague has added impetus to the new push to arm the opposition, again suggesting Britain would support moves to lift an arms embargo on the rebels.

A flurry of diplomatic moves this week, after months of political torpor, appear to have revitalised opposition efforts throughout Syria. The frantic diplomacy has been driven by fears that Syrian officials might use their stocks of chemical weapons as a last resort on battlefields that are no longer under their control.

A rebel siege of Damascus has now entered its second week. And although loyalist army divisions appear at no immediate risk of losing the capital, military units elsewhere in the country have lost influence over large swathes of land and are under increasing pressure over supply lines.

Rebels have been under pressure from the US, Britain, France and Turkey to fight under a joint command and control structure rather than as an assortment of militias, which often work at cross purposes.

At a meeting in Istanbul on Friday, commanders of the Free Syria Army – more of a brand than a fighting force throughout the civil war – agreed to establish a 30-member unified leadership.

After 21 months of crumbling state control in Syria, western diplomats in Ankara and elsewhere in the Arab world appear to be shifting their thinking from trying to manage the consequences to planning the future course.

“Assad won’t be here next December,” a senior Turkish official predicted. “Even the Russians have moderated on this. When we used to talk to them about Assad going, it was point-blank refusal. Now they are looking for common ground and wanting to exchange ideas.”

The official said the US has also recently stepped up its efforts to oust Assad, but was not yet talking about arming the opposition and was refusing to deal with Islamist groups, such as Liwa al-Tawhid.

“What has happened with Jabhat al-Nusra (gaining influence), I would say is a product of (US) attitudes,” he said. “They have a template by which they operate. And if a group fits perfectly into that, well that’s fine. And if they don’t it’s a problem for them.

“Some of these groups have been forced to pretend that they are jihadists in order to get what they want.”

US officials this week said that Turkey, for its part, was not prepared to directly lead the international response to Syria and was expecting Washington to fill that void.

President Barack Obama’s warning during the week to Assad not to use chemical weapons was seen as his most strident stance yet, but it signalled no shift from an official wariness of the opposition, which had become more pronounced as jihadist groups gained prominence around Aleppo from late in the summer.

Turkey also remains wary of a potential threat from chemical weapons. However, officials said they were not convinced that even cornered regime leaders would use them.

Ankara will soon to take delivery of several patriot missile batteries, along with 400 German troops who will operate them along the southern border with Syria.

Officials say the increased Nato presence in Turkey makes it likely that Turkish air space and military bases would be used in the event of a decision being made by the US to seize Syria’s chemical weapons stockpiles.

“That would have to be dealt with through existing mechanisms of Nato,” the official said. “There is now a framework in place.”