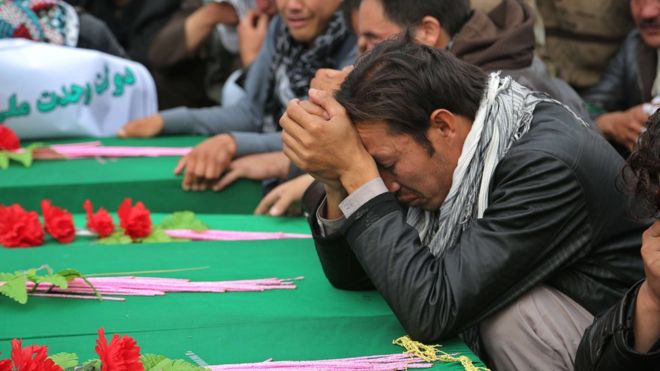 About 2,000 people have protested in the eastern Afghan city of Ghazni against the killing of seven civilians by militants.

The murdered Shia Hazaras included four men, one woman and two girls. Some had their throats slit – it is not clear by whom.

Their bodies were found at the weekend in southern Zabul province where fighting between rival Deobandi Taliban factions has escalated over the last few days.

One group claims to have launched a rare suicide attack on the other.

The protests in Ghazni saw huge crowds march through the city as the coffins were driven through the streets.

Protesters chanted slogans against the Taliban and the Islamic State group and demanded better protection from the government.

Ghazni has a large population of minority Hazaras who are mostly Shia Muslims. But unlike in neighbouring Pakistan they have been largely spared attacks by Deobandi militants in recent years.

The bodies of the seven victims were later moved to Kabul where hundreds were waiting to meet the coffins ahead of further protests.

The seven Hazaras were killed after fighting erupted between two factions of the Taliban. It is not clear who murdered the abductees.

Some reports point the finger at foreign fighters, possibly from Uzbekistan, who are said to have joined a Taliban splinter group. But the deputy head of the breakaway faction denied any involvement in a phone call to the BBC.

However two days after the killings, eight other Hazara hostages were freed.

One of those released told the BBC that they had been held by foreign fighters who were speaking Uzbek.

That would support the theory that foreign fighters are to blame for the killings – as well as a spate of kidnappings targeting Hazaras.

President Ashraf Ghani condemned the murders as a “heartless killing of innocent individuals” which had no justification in any religion.

The US embassy in Kabul also offered condolences to the victims’ families.

There have been reports for several days of fighting between rival Taliban factions in Zabul, a province where insurgents control several districts and where some fighters have declared allegiance to the Islamic State group.

In the latest confrontation a Taliban splinter group formed last week claimed it had carried out a suicide attack on its rivals, killing and wounding dozens of fighters loyal to Taliban leader Mullah Akhtar Mansour.

Mansour was appointed leader of the Afghan Taliban in September after the group announced the death of founder Mullah Omar.

But last week the breakaway Taliban faction appointed its own leader, Mullah Mohammad Rasool, underlining the deep divisions in the group.