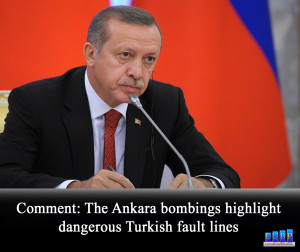 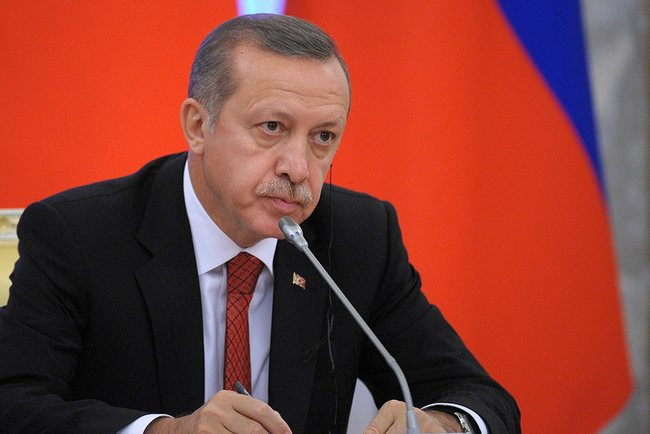 Hours after the Ankara bombings on Friday, which killed at least 100 people and injured over 400, Turkish President Recep Tayyip Erdogan called the twin bomb blasts an ‘attack on our unity‘.

The statement was ironic considering that Erdogan’s ruling Justice and Development Party (AKP) lost its 13-year majority only four months ago, with the hung parliament and the ensuing failure to form a coalition government being the backdrop of the biggest terrorist attack in Turkish history.

Not to mention the fact that the targeted rally was itself a demonstration against the Turkish Armed Forces’ precipitously escalating conflict with the separatist Kurdistan Workers’ Party (PKK).

Far from being an ‘attack on unity’, the Ankara bombings laid bare the fault lines that had been threatening to jolt Turkey for quite some time. And the eventual quake couldn’t have come at a worse moment, considering that Turkey is at the forefront of the two biggest crises that the Muslim world is facing: the Syrian refugee crisis and ISIS.

Even though no one has claimed responsibility for the Ankara bombings as yet, an analysis of the modus operandi and Turkish prime minister Ahmet Davutoglu’s statement points all fingers at ISIS.

Following July’s Suruç bombing, the Turkish government had vowed to alter its stance on ISIS and go after them. What happened instead was an escalation of airstrikes by Turkish armed forces on separatist Kurdish militants in Northern Iraq and Syria, in Operation Martyr Yalçın which was ostensibly designed to target ISIS bases.

Erdogan, who has been accused of preparing ground for ISIS to destroy PKK separatism, has traditionally feared Kurdish autonomy more than ISIS, and has even gone on to say that the two (PKK and ISIS) are the same. It is precisely this suicidal failure to differentiate between the separatist militancy of PKK, and the imperialist terror campaign of ISIS, that is the biggest visible fault line in the immediate aftermath of the Ankara bombings.

Erdogan’s facilitation of the ‘lesser evil’ ISIS – against Kurdish separatism and Bashar al-Assad – within Turkish geopolitical and territorial jurisdiction, has now made the state’s capital vulnerable to ISIS attacks.

A major factor in the AKP’s loss of its parliamentary majority is Erdogan’s Islamisation of Turkey. Not only has the transformation of the nominally secular democracy into a quasi-theocracy alienated some of AKP’s vote bank, like a true Islamist Erdogan has added a sectarian element to Turkish policy making.

The corollary: countering the traditional Shia Crescent has been an inalienable doctrine of ‘Sunni’ Turkey’s foreign policy for the past decade, wherein anyone fighting Assad is a natural ally for Ankara.

Clearly, Turkey’s bellicose paranoia vis-à-vis Kurdish separatism, and the rise of Islamism, is blinding it to the world’s biggest terrorist threat, that it has allowed into its borders.

The paranoia has been further exacerbated by the pro-Kurdish People’s Democratic Party’s (HDP) stellar showing in June’s elections, where it bagged 80 seats to deprive the AKP of a clear majority.

The Kurdish party had extended its appeal beyond the Kurdish population by rallying for secular and liberal causes and human rights, including that of women and LGBTQ people. Maybe there’s a lesson in there for Erdogan.

Turkey will now gear up for the election on 1 November, three weeks after the Ankara bombings, seeking a government that can unite against ISIS and launch a no-nonsense military campaign in collaboration with the Western allies.

Kurdish separatism will also be on the voters’ minds, with a political solution the likeliest option, considering that Turkey should be focusing its security forces on countering ISIS.

The centre and PKK need to earmark common ground to put an end to decades of violent separatism that has aggravated political and religious pluralism in Turkey. Identifying ISIS as a common enemy, and uniting against it, could be a good place to start.

Furthermore, the rising influx of Syrian refugees in Turkey, which has now reached 2.2 million people, is a humanitarian crisis which can only be overcome with political stability in Damascus. Especially since Turkey’s ‘two-front’ war against PKK and ISIS will continue to distract Ankara from taking long-term measures for the refugees’ integration.

This does not mean acquiescing to Assad’s brutalities, or not envisaging a political solution without him. But barefaced sectarian diplomacy will only embolden ideological fault lines that have been the primary cause behind the problems facing the Muslim world.

For a long time Turkey was the vanguard of secular, progressive Muslim states. It needs to retrace its pluralistic past to lead the Muslim world out of its totalitarian mess, and curb the proliferation of murderous ideologies that the likes of ISIS manifest.

For that to happen however, Turkey will first need to address, and overcome, its own politico-religious fault lines.