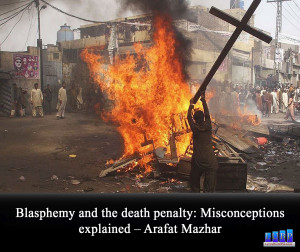 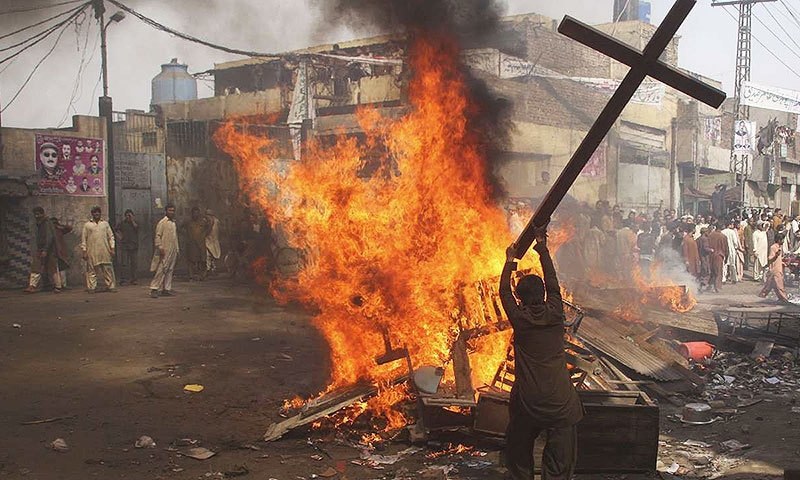 This is the fourth article in a five-part series on the untold story of Pakistan’s blasphemy law. It is recommended that the previous parts be read in order to understand the context of this article.

Part 2: The fatwas that can change Pakistan’s blasphemy narrative

At the beginning of this year, when this series began, Junaid Jamshed had been charged with blasphemy.

Judging from comments across social media and forums, a significant proportion of the online population reacted with a mood of forgiveness.

Some commentators said he was deserving of sympathy and forgiveness because, even though he was accused of blasphemy, he had apologised and was a Muslim. Indeed my first article went to great lengths to establish the acceptability in Islam for pardon of actual blasphemers.

When this same charge is levelled at a non-Muslim, however, the reaction is extremely negative, and often violent.

Such a reaction is contradictory to the Hanafi jurists who have commented on the issue throughout the past 1200 years. Those jurists represent the stance of the Hanafi school of thought, which is one of the four schools of thought in Sunni Islamic Jurisprudence and the one with the largest following in the world, as well as the predominant theological orientation to which an overwhelming majority of Pakistani Sunnis subscribe.

Contrary to popular sentiment and belief, the position on Muslim blasphemers is actually stricter and more severe than on non-Muslims. In fact, throughout the Hanafi tradition, blasphemy by non-Muslims is recognised merely as an extension of their disbelief.

‘Non-Muslims insult Allah and say that He has a son and the Zoroastrians say He has an “opposite.” This does not break their covenant of security, therefore the same applies to insult of the prophet PBUH.’
[Al-Tajrid]

Ali ibn Abi Bakr al-Marghinani in Al Hidaya (which is taught all over Pakistan in Hanafi seminaries) states:

In fact, Tahawi goes on to prescribe a verbal warning as an appropriate punishment for an offending non-Muslim:

‘If a non-Muslim commits blasphemy, he will be given a verbal warning. If he repeats the offense, he will be punished but not killed.’
[Mukhtasar al Tahawi]

One may be tempted to think that in citing these sources, I am cherry-picking i.e. selectively choosing ones that support this stance. But, in fact, this is not the intent or method of research.

Below is a compiled, annotated timeline of every Hanafi jurisprudence text of significance that has discussed non-Muslim blasphemy.

View the timeline in a full screen.

This includes four authoritative tomes, whose monumental significance and influence can be gauged by the fact that they have had over 200 commentaries written on them.

Even the briefest perusal of this reference resource will show that there is a unanimous prohibition on the killing of non-Muslims for the offense of blasphemy. The only exception noted is in the case of habitual offense committed as treason, and therefore liable – at the discretion of the ruler – to any punishment up to and including the death penalty.

It is ironic, then, that people believe that to not kill a non-Muslim blasphemer – and even to advocate for his/her life – is tantamount to blasphemy itself.

How is it, then, that today’s Hanafis (including devout Barelvis and Deobands) differ so radically from the position established by the most revered personages of their tradition?

In my first article, I established that Pakistan’s blasphemy law and the discourse surrounding it re-imagined the offense of blasphemy, claiming that there was an ijma (consensus of scholars) that blasphemy carries a hudd (divinely ordained) punishment of death, with no possibility of pardon.

My first article established that on all three points (ijma, hudd and the impossibility of pardon), this narrative was wrong, and based on a completely erroneous reading of Imam Abu Hanifa’s position on blasphemy by the 14th century scholar, al-Bazzazi. This misattribution was subsequently used by Ismaeel Qureshi in framing Pakistan’s blasphemy law.

Yet, even in al-Bazzazi’s incorrect reading of Abu Hanifa, he was still only talking about the death penalty with respect to Muslim blasphemers.

This means that the origin of the current narrative against non-Muslim blasphemers rests on uncertain foundations.

The original quote built off the misreading:

“A Muslim blasphemer of the prophet PBUH will be killed under hudd and his pardon won’t be acceptable.” – (Ibn Abidin, Kitab al Jihad, Bab al Murtad)

Which Ismaeel Qureshi changed to:

“A kafir blasphemer of the prophet PBUH will be killed under hudd and his pardon won’t be acceptable.” – (Ibn Abidin, Kitab al Jihad, Bab al Murtad) 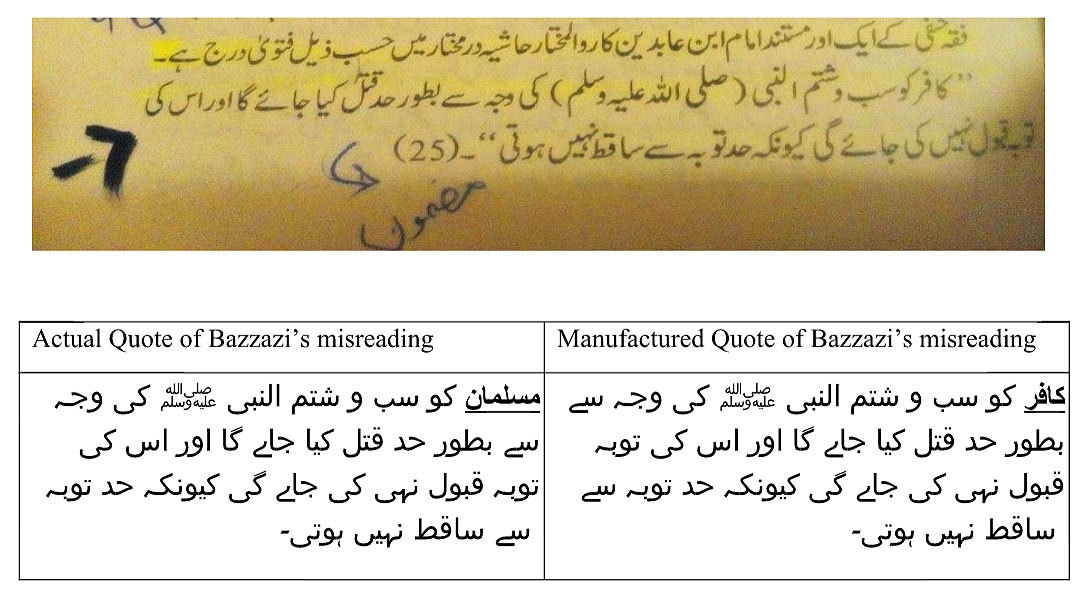 In summary, Ismaeel Qureshi not only picks an established erroneous stance, but also goes on to misattribute it to a much greater and renowned scholar (Ibn Abidin), and finally extends this false position to non-Muslim offenders as well.

The result: An erroneous extension of an already false prescription (fixed death penalty) for Muslims, to non-Muslim offenders as well.

As a result of this, various distinct groups are now subjected to the same treatment under the blasphemy law.

The sordid history of the blasphemy law includes other attempts at establishing the strictest possible penalty (death) for non-Muslims by quoting sources meant only for Muslims.

In 1987, when the law was first passed, references were made, in the parliament, to Fatawa-e-Alamigiriyah (the most consulted resource for fatwas in South Asia) to establish a consensus on blasphemy being a capital offence for Muslims and non-Muslims, when the text explicitly states a guarantee of the protection of the life and property of non-Muslim offenders by the state.

Excerpt from Arabic version of Fatawa-e-Alamgiriyyah:

Further in 1991, the Federal Shariat Court, in a judgement applying to both Muslims and non-Muslims, cited Abu Bakr al-Jassas al-Razi’s position of a death penalty for blasphemers, while ignoring the same author’s prohibition on killing non-Muslim blasphemers.

English Translation: ‘Whoever insults the Prophet, non-Muslims will not be given a death punishment.’

It is unclear whether this was a deliberate or incidental oversight. But, even today, indications of a distorted understanding of the issue are abundant. The narrative is perpetuated by a variety of similar instances of erroneous and at times, fabricated sources.

Take, for instance, a fatwa on the treatment of blasphemers (both Muslims and non-Muslims) published by Jamia Uloom e Islamia, Binori Town (one of the largest Hanafi seminaries in Pakistan). Here is the original text of the fatwa, which is citing Al Sarim al Maslool:

Scanned excerpt from a fatwa from Binori Town: 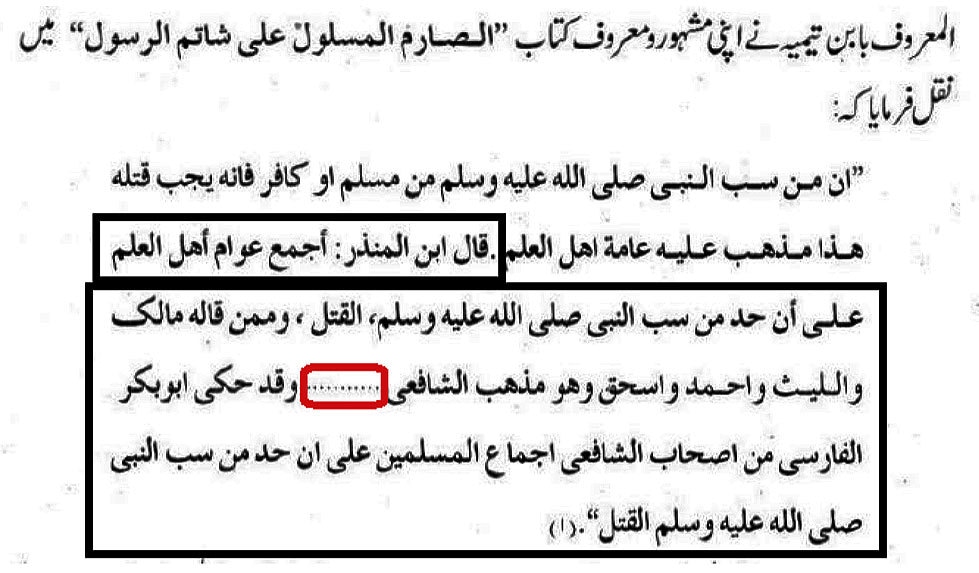 Translation: “There is a general consensus amongst scholars that he who insults the Prophet PBUH will be killed as *hudd. This has been endorsed by Imam Malik, Imam Laith, Imam Ahmad, Imam Ishaq and Imam Shafi has the same position …… and Abu Bakr Farsi quotes Imam Shafi on the general consensus of Muslims on death penalty to blasphemers.”*

At first glance, it seems that the use of ellipses “…” is merely to save space and exclude irrelevant information. However, upon locating the cited source with the complete sentence, we find that the ellipses had been used to omit one of the most significant aspects of the ruling.

Here is the complete text from which the fatwa is ostensibly quoting:

“There is a general consensus amongst scholars that he who insults the Prophet PBUH will be killed. This has been endorsed by Imam Malik, Imam Laith, Imam Ahmad, Imam Ishaq and Imam Shafi has the same position. However, Abu Hanifa differs and states that a non-Muslim will not be killed for blasphemy. Shirk is a greater sin (and we do not kill him for that). Abu Bakr Farsi quotes Imam Shafi on the general consensus of Muslim.

The ellipses reveals itself — scan of original Arabic text:

Translation: “Abu Hanifa differs and states that a non-Muslim will not be killed for blasphemy. Shirk is a greater sin (and we do not kill him for that).”

It is surprising that the Binori Town scholars chose to omit a reference that prohibits the killing of a non-Muslim blasphemer, especially when one considers that the omitted source is none other than the very founder of their own madhab (religious tradition), Imam Abu Hanifa.

In formulating a fatwa, a Hanafi jurist is bound to refer to the ruling of his own school, and over here, what has occurred is the opposite, simply because the position endorsed by their own school in this case provides a more lenient and forgiving narrative towards non-Muslims.

Clearly, the internal biases and ‘otherising’ perspectives of the Ulema are interfering in their intellectual integrity in responding to issues of blasphemy.

Moreover, the use of ellipses appears to be an attempt to manufacture consensus on the issue and to suppress any opposing viewpoint, even if it comes from within their own tradition; the tradition which is the pre-dominant one in the region.

Indeed, scholars throughout the Hanafi tradition who adhered to strict codes of integrity, have acknowledged a natural bias to prescribe the strictest possible punishment for the offense of blasphemy, and have admitted that it even feels like a matter of honour to do so, but have cautioned against giving in to such biases.

A feeling of dishonour (‘bey-gharati’) is natural when I think of Hanafi tradition on non-Muslim blasphemers i.e. they will not be killed for it. Then God puts in my heart the thought that Abu Hanifa (who prohibited the death penalty for non-Muslim offenders) has more honour/ghairat than us. [Malfoozat e Hakeem ul Ummat, Vol. 26]

“Although our hearts tilt towards a strict punishment to the non-Muslim blasphemers, we must not pay heed to it.” (Ibn Abidin, Tanbih al-wulat wa’l hukkam ‘ala Ahkam Shatimi Khar al-anami aw ahadi ashabihi’l kiram)

With the latest Supreme Court judgement, it appears that our institutions have realised the need to reexamine our own biases in the indiscriminate and heavy handed application of a death penalty to a population it was perhaps not meant for.

In light of all the research and resources that are now available, and observable mistakes made over the past three decades, perhaps it is time that we start learning from history and set the record straight.