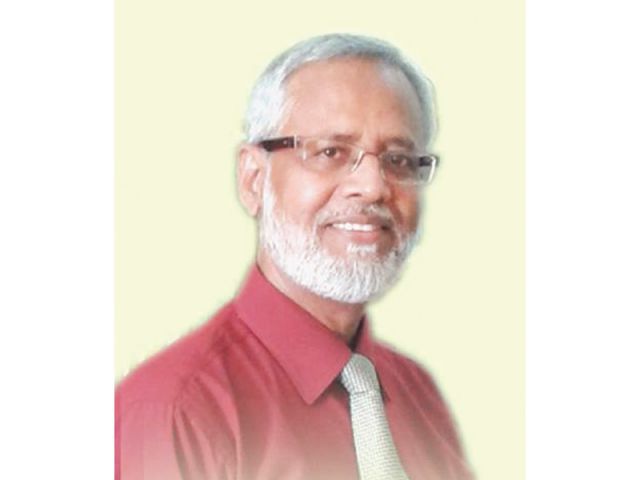 It was September 18, 2014. I hadn’t been feeling well and received a message from my father, Dr Shakil Auj, asking me if I was feeling better, to which I replied that I wasn’t. “Did you try the ritual of reciting Ayatul Kursi on sweets and then eating them?” he asked. “No, I didn’t feel like doing that.” “How will you get better then?” “Oh father, there is another patient. I’ll call you back.” “Son, take good care of your health,” he said before hanging up. Never had I imagined that this was the last time I would hear my father’s voice.

At 10.30am, my cell phone rang. It was a close friend calling, her voice hinging on urgency, “Hassan bhai, abbu ko goli lagi hai. Foran Aga Khan aaein.” (Hassan bhai, father has been shot. Please come to Aga Khan immediately). A tornado of dreadful thoughts gripped my heart and paralysing trepidation hit me as I rushed to the hospital. My quivering fingers dialed my father’s number, but no one answered. I dialed his number again, which was received by Dr Amna Afreen, my father’s dearest student. Frantically, I asked, “Where exactly has he been shot?” As a doctor, I wanted to know what the chances were. In a muffled voice, she answered, “On the head.” And that served as the straw that broke the camel’s back.

On reaching Aga Khan, the doctor assured me that he was going to survive. But I knew the truth. My father lay on a stretcher, blood dripping from the upper part of his left cheek. I checked his pulse. It was gone. There was no life, no motion, no breathing. The nurse lowered her gaze to unleash the reality. We were now left to wrap our minds around the horrible truth. I directed my eyes at my father. It was as if someone had punched me in the stomach. He still looked so serene, with the silver of his hair peeking out at me and peace etched onto every single line of his face. Clad in a suit and a red tie, he looked immaculately dressed for receiving the highest honour a Muslim can achieve — martyrdom. The room had suddenly turned into a pit of tears, anguish and screams. Reality had finally dawned upon all of us. The tears that fell from our eyes told a story of dead hopes, broken dreams and a destroyed happiness. With him, our hearts died slow deaths too.

Dr Amna had also been shot in her left shoulder, but she had completely forgotten about her injury. I walked out of the room with my father’s phone in hand, receiving calls and confirming that the news on TV was correct. A flood of professors, employees of University of Karachi and relatives gushed into the emergency room. As my mother arrived, she had to be helped by two ladies. It was as if she had lost the ability to walk on her own. She saw her husband’s dead body and the excruciating loss caused her to cry out to her sons. It was like sleeping with a roof over our head one night and then suddenly realising that we had all become homeless. SSP Pir Muhammad Shah and SSP Farooq Awan, along with other police officers attended to the case and I handed over my father’s phone to them. The autopsy report that came later didn’t come as a shock: he was hit by a single bullet which pierced through his head from behind and came out from the upper part of his left cheek. With the crushing burden on my heart, I headed home — but without the homemaker.

Evil people can only eclipse the sun but can never be as radiant as it. With the martyrdom of my father came the rumours of him belonging to a particular sect. Days passed by, but our hearts stayed ablaze with anger at the heinous crime and the criminal silence of the religious orthodoxy. My father was just an ordinary Muslim, with no strings attached of belonging to any particular sect. He was a scholar who saw beyond demarcations of sects, ethnicities and cultures. From his early childhood, he had seen poverty and hardship. Since he could not pay his local cleric to become a Hafiz-e-Quran, he had to compensate by performing the cleric’s household chores. He was beaten remorselessly on a daily basis, which left such a strong imprint on his mind that till his death he used to have nightmares about his torturous childhood experience. He chose to be a Hafiz-e-Quran, and that is the reason why he never enforced his choices upon us.

My father was a man of moderate views, who only spoke in the light of the teachings of the Holy Quran. In a session he attended as a guest speaker, he was bombarded with heaps of offensive questions. The session was also attended by my younger brother and it was there that he realised how much pressure our father handled daily and the grave danger he faced with each breath he took. History has been witness to this undying truth through the ages: crowds and mobs can never tolerate intellectuals, be it Socrates, Galileo or Javed Ahmed Ghamidi. What will it take for the truth to walk with its head held high rather than crawl on its knees to reach the mindsets of many in Pakistan?

On May 2, 2015, al Qaeda in the Indian Subcontinent (AQIS) released a video in which it claimed that it was responsible for Dr Shakil Auj’s assassination. They had, earlier, released a letter in Arabic in February 2014, claiming the assassination. Why did the AQIS kill my father? In 2012, a fatwa was circulated with fake signatures of Mufti Rafi Usmani labelling Dr Auj an infidel and liable to be boycotted. In another fatwa, with a morphed sign and stamp of Mufti Taqi Usmani, and many others, he was labelled an infidel and liable to be killed. An SMS campaign was launched against him, which repeated the claims of the fraudulent fatwas. The person responsible for this was an employee of NED University, who was caught by the CPLC. He informed the police that he was brainwashed into launching the campaign, and was helped by three professors of University of Karachi. An FIR was filed against all four. But the notice of the case proceedings never reached my father and the accused were acquitted. My father believed in healing souls with forgiveness so he forgave the culprit. But the venom had already spread. This tale does not end here. His book on women’s rights in Islam, as well as his views on jihad and terrorism caused much controversy among the religious orthodoxy.

The flashbacks from the day of his martyrdom haunt me to this day. He was going to the Iranian Cultural Centre, where an event had been organised in his honour. There were four cars that left from the Faculty of Islamic Studies for the event. My father sat in his friend’s car instead of his own. He was sitting in the middle of the backseat. Dr Tahir Masood sat on the right. His niece Asra and Dr Amna sat on the left. They were at the Nipa bridge when Dr Tahir jokingly asked him, “What should I say about you in my speech?” “You should say that Dr Shakil Auj’s writings are based on the Holy Quran and Ijtihad,” he replied. The moment he completed his sentence, the bullet hit him in the head. That single bullet tore our hearts open and ripped apart a happy family.

The martyrdom of my father represents the battle between right and wrong. The flame of truth gave its life so that the spirit of Islam does not fade under the canopy of oppression. Our roots are so deep that the oppressors’ motives can never knock us over. O’ Father, I promise to get you justice. We will win this battle against evil. Till then, I will continue to hail the name of Auj with every drop of blood in my body.