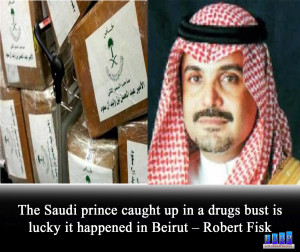 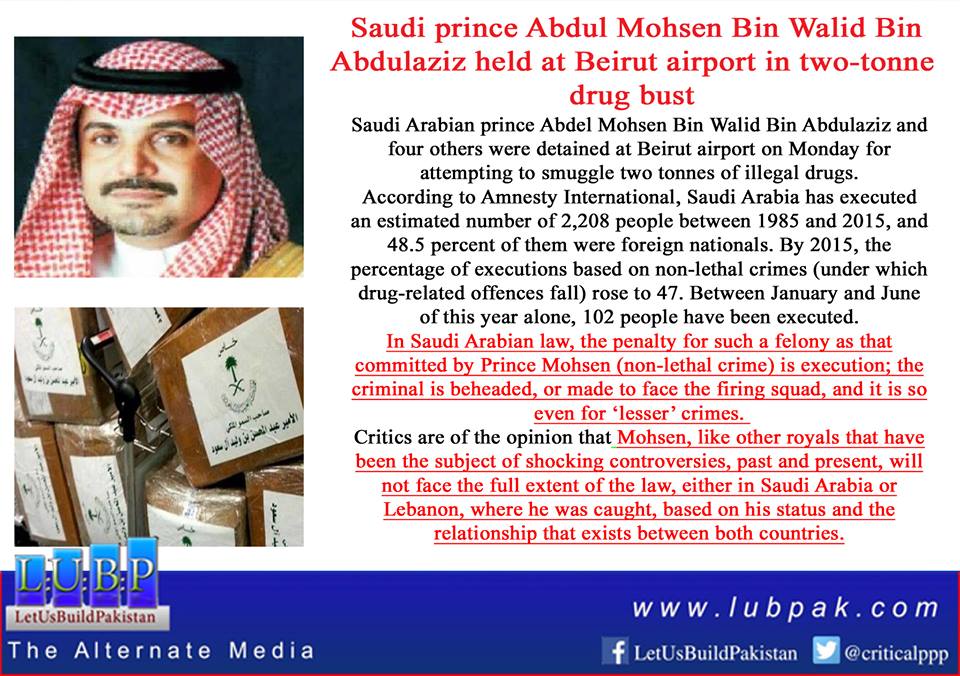 It’s not every day you get to bust a Saudi prince. Amphetamines. Twenty-five boxes and six suitcases, all – according to photos and video – stamped with the Saudi Arabia emblem of palm tree and crossed swords, to be shipped out on a private Saudi jet.

And on the boxes can be seen the name of an emir of the state for which David Cameron himself lowers the British flag when the monarch dies. Even this short dispatch may have the effect – fear not – of raising the eyebrows of the Saudi ambassador to London, who has been warning the British that 50,000 UK families may be at risk of losing their livelihoods if we don’t stop whining on about human rights in their Salafist-Wahhabi institutional kingdom.

But relax. Abdul Mohsen bin Walid bin Abdul Aziz al-Saud (born 18 July 1986, according to his diplomatic passport) was reported to have been attempting to fly out of Beirut International Airport with four Saudi chums on his private jet on Sunday. The Lebanese who grabbed them must regret that their customs scanner ever picked up the cargo.

Lebanon is deeply indebted to the Saudis who generously rebuild much of Lebanon every time Israel invades it. The eloquent Lebanese Minister of the Interior Nouhad Machnouk has already denied knowledge of any details of the affair – a likely story – saying that it is “in the hands of the justice [ministry]”.

No doubt. A Lebanese website has even given the name of the judge – Dany Chrabieh – who referred the emir and his four Saudi companions to the country’s Central Office of Combating Drugs. Lebanon’s press is trumpeting the whole affair as one of the biggest suspected drug trafficking hauls in the history of Beirut airport – which has quite a history – and the value of the seized cargo as around £190m. But what was it all for? Were the two tons of Captagon (alleged) to be resold?

Were they to pick up the flagging energies of Saudis enjoying the nightclub pleasures of the world? Militiamen in Lebanon’s wars certainly used drugs to keep on fighting at night. And Lebanon has not always had a perfect reputation when it comes to drugs. The 1975-90 civil war generated a massive hashish industry, which has continued, on and off, in the Baalbek area – in miniature form – ever since. But surely this has no connection.

Al Jazeera, Qatar’s empire-building television channel, has been glorying in the story. Which is not surprising, given the Qatari emir’s frightful relationship with the Saudis. This is the same television channel which put out two interviews with the leader of the Islamist Jabhat al-Nusra in Syria not long ago in an obvious attempt to persuade the Americans that his group was just the kind of “moderate” outfit the Americans should support in Syria’s civil war.

As opposed to Isis which is rather popular among some Saudi citizens. But it’s all a bit embarrassing. If there’s an elderly Briton facing 350 lashes for transporting alcohol in Saudi Arabia, what would the Saudis have done if they found all this Captagon in their own kingdom? Pakistanis and Sri Lankans and others from poor countries suffer head-chopping for less.

But let’s rely on Lebanese justice. Innocent until proved guilty. Lebanon’s large Sunni Muslim community loves Sunni Saudi Arabia. Indeed, two of its prime ministers (Hariri, father and son, both good men) have been Saudi as well as Lebanese citizens. All just one big mistake, surely. Wrongly labelled boxes. Or perhaps a fiendish conspiracy by Saudi’s Hezbollah enemies in Beirut to embarrass the most respected royal family in the Middle East.