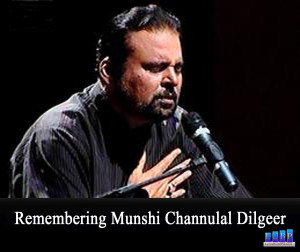 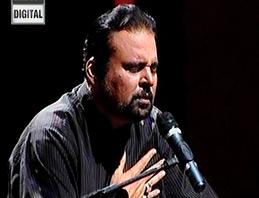 The famous dirge (Noha) ‘Ghabraaey gi Zainab’ was written by a Hindu poet Munshi Channulal Dilgeer.
Munshi Channulal Dilgeer lived before Anees and also penned 417 marsias.
‘Ghabraaey gi Zainab’ used to be recited in Lucknow since long, especially on ‘Shaam e Gharibaa’n,’ but in a quick momentum.
When Nasir Jahan first recited it on radio in 1956, he changed the delivery to a slow rendition that became highly appreciated and widely emulated.
http://ghabrayegi-zainab.blogspot.com/
May God rest Channulal Dilgeer and Nasir Jahan on a pedestal among the lovers of incomparable Imam Hussain. Amen.

Channulal’s brother Raja Jhau Lal had genuine deep affection for the martyrs of Karbala. He also built an Imambara in Thakurganj locality, which is still in use. It is a simple structure but impressive in spirit of its builder.

Inspired by his brother’s affection towards Ahle- Bait, Channulal studied the tragic narratives of Karbala in detail and he was captivated by the sublime sacrifice of Imam Hussain and his small band of determined and brave followers. He did not recite marsiyas himself due to speech defect but his compositions were quite popular and were recited in Majlises.

Channulal began as a romantic poet and concentrated on Ghazals, Masnavi and vasokht. But once he started praising Imam Hussain, he gave up writing ghazals or other forms of romantic poetry completely and obliterated all his earlier compositions by throwing them into Moti Jheel and dedicated himself to marsiya and salam writing.

History records that he was one of the most favorite disciples of a celebrated poet of Urdu’ Nasikh’ and a contemporary of Mir Khaliq and Mirza Fasih. Poet Mushafi has praised his poetry but stated that ‘Tarab’ was his takhallus. However, the truth is that Channulal used Tarab as takhallus so long as he composed Ghazals but once he started composing poetry in praise of Ahle-bait, he always used Dilgeer as his pen name.

His reputation as a marsiya writer soared so high that a large number of people used to believe that he was the Ustad of one of the greatest Marsiya writers Mirza Dabeer. That is not factually correct, though. Mirza Dabeer instead of refuting this impression once quipped “It indeed would have been a great honor for me, had Dilgeer been my Ustad.” These words from the haughty Dabeer are a tribute to the stature of Dilgeer as a marsiya writer.

Historical accounts reveal that Dilgeer was born in 1780 and died in 1848. He was alive during the reign of Nawab Saadat Ali Khan. He also witnessed the coronation of Badshah Ghazi Uddin Haider. In ‘Shahan-E-Awadh –Haqeeqat ke Aine Mein’, (Rulers of Awadh in the Mirror of Reality) Dilgeer has been praised by its writer Akbar Haideri for constructing an imposing Imambara during the period of Ghazi Uddin Haider. The author has also appreciated Dilgeer for placing a Good looking Tazia.

While no trace or exact location of his imambara is available details of his house are known. Historian Agha Mehndi has mentioned the location of his house in Kanghi wali Gali that is untraceable now. It is however believed that he resided near the Tiraha merging with Victoria Street near Nakhas.

The apathy of our scholars to Dilgeer, a prolific marsiya writer who had detached himself from worldly affairs to become an Azadar considering the message of Imam Husain as a true path to tread upon to attain salvation, is indeed deplorable.