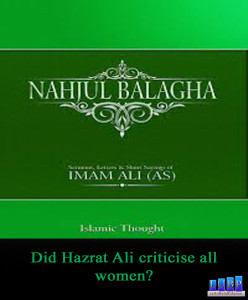 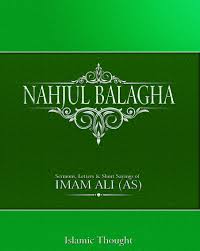 As is the usual tactic of Nasibis (enemies of the Prophet’s family), Takfiri Deobandis/Salafis and secular sectarians, these days some people are circulating a passage attributed to Imam Ali in which all women have been denigrated. The passage itself is problematic, but more problematic and malicious is the attempt to accept this passage without authenticating it and then using this as a means to attack the Islamic faith including Shia Islamic faith.

Here are a few points to ponder.

1. This passage is ‘attributed to’ Imam Ali, not necessarily said by him in these words. Many Shia clerics question a few passages attributed to Maula Ali including some reported in Nahj ul Balagha. I have never come across any Shia scholar who said that every single word/line reported in the Nahjul Balagaha (compiled by Syed Sharif Razi almost 350 years after Imam Ali’s martyrdom) is authentic. Yes, most of the sermons and statements in the book are believed to be authentic, corroborated by other historical sources, but some passages including the one denigrating women are not, and are also inconsistent with Imam Ali’s general position towards women. Indeed, no Shia cleric has ever delivered a sermon or written a book based on this passage.

2. Imam Ali’s whole life including his respectful attitude towards Hazrat Fatima Bint Asad, Hazrat Fatima Zahra, Hazrat Zainab, Hazrat Umme Salma and other women in his life is recorded in history. Thus this passage is not consistent with his actual practice.

3. It is a fact that Imam Ali was critical of his political opponent, Hazrat Ayesha Bint Abu Bakr, because of her negative attitude towards his and his Caliphate before and during the Battle of Jamal. It would appear that the reporter has exaggerated Imam Ali’s criticism of Ayesha, by removing her name and making the statement more generic to all women, taking into account Sunni Muslims’ sensitivity towards Ayesha.

4. In evaluating historical reports, an out of context and uncritical evaluation is always problematic. For example, the Takfiri Deobandis and Salafis usually misinterpret the Quranic verse “don’t befriend Jews and Christians” out of context and generalise it for all Jews and Christians whereas the verse addresses only those who committed treason in the State of Medina in the Prophet’s time.

5. The timing (Ashura) of such ill-intended and dishonest criticism of Imam Ali is equally problematic because sectarian seculars and Deobandi atheists want to denigrate the revered heroes of Shias, Sufis, Sunni Barelvis and all Muslims.