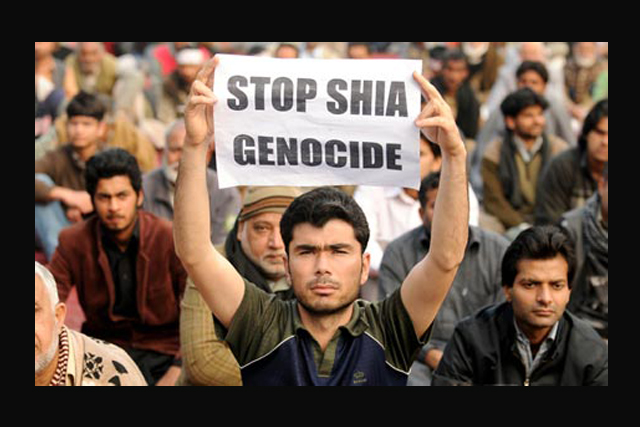 Editor’s note : So even if those muslims commemorating Hussain and Karbala (Sunni and Shias) are denied their right to public space, they will still be targeted.What say you Honda Civic Society? Muawiya Marxists? Sufyani Liberals?Many of you want to selectively curb and deny others the right to legally apply for licence for public rallies during 3 public holidays of the year on Ashura and Eid Milad Nabi. What do you have to say for this? These people were killed while they were inside an Imambargah.

QUETTA: A suicide attacker blew himself outside an imambargah in Bolan’s Goth Chalghari area on Thursday, killing at least 10 people and injuring many others, DawnNews reported.

“At least 10 people were killed and 12 others were wounded after a suicide bomber blew himself up at an imambargah,” said Balochistan Home Minister Sarfraz Bugti.

Bugti said there were six children between 10 and 12 years old among the dead and that some women had also died. He added that the death toll may rise.

Waseem said the suspected suicide bomber appeared to be about 18 years old and was wearing a woman’s burqa.

Rescue workers and people of the area faced difficulties in shifting the injured to any hospital.

There is reportedly only one basic health unit in the vicinity, that too without a qualified doctor and proper health facilities.

More than a dozen people were injured in the blast, which rocked the village located in interior Balochistan.

Security forces reached the blast site and cordoned off the area.

According to initial police investigation, a suicide bomber blew himself up outside an imambargah in Goth Chalghari area of Tehsil Bhag in Bolan district.

The injured would be shifted to civil hospital Sibi for medical treatment.

Security has been beefed up in and around the locality after the blast, with contingents of FC and police patrolling different areas.

Earlier in the week, a blast in a local bus killed at least 10 people, two of them children, on Sariab road. Twenty-two people were injured, six of them seriously.

Balochistan Chief Minister Abdul Malik Baloch had condemned the blast and said, “I am personally monitoring the situation.”

Preparations were made to ensure that the Muharram passes incident-free and security plans to ensure the safety of processions were finalised.

Sectarian violence has claimed thousands of lives in the country over the past decade. Many of the worst atrocities have taken place in the southwestern province of Baluchistan.

The gatherings and processions during Muharram mark Hazrat Hussain’s (RA) martyrdom in the Battle of Karbala, Iraq, in 680 AD.

Balochistan has been experiencing incident violence and targeted killings since more than a decade. More than 1,400 incidents targeting the minority Shia and Hazara community have taken place in the province during the past 15 years.

While sectarian terrorism in Balochistan has disproportionately targeted the Hazara community, easily identifiable because of their distinctive physical appearance, other Shias — especially pilgrims travelling to and from Iran — have not been spared either.

The largest province of the country by area, is home to a low-level insurgency by ethnic Baloch separatists. Al Qaeda-linked and sectarian militants also operate in the region.