Home  »  Newspaper Articles   »   Did Turkey’s regime just kill its own people at a peace rally? 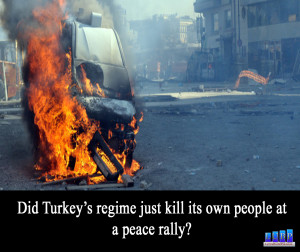 Turkey’s government would have you believe that Kurdish terrorists killed more than 100 Kurdish party faithful at a peace rally. It’s clear the Erdogan regime thinks the world is pretty stupid to believe that. Amazingly, Western leaders are buying it.

That bomb blast, this time in Ankara, is the third recent Kurdish party (HDP) peace rally to be attacked with explosives (the others were at Diyarbakir and Suruc), with nearly 200 casualties at all three attacks. All of these have occurred since the HDP won enough votes to deny Erdogan’s party a majority in Turkey’s parliament.

Here’s how Turkish Prime Minister Ahmet Davutoglu sought to explain the event to his people, and the world.

“For some time, we have been receiving intelligence information based from some (Kurdish rebel) and Daesh statements that certain suicide attackers would be sent to Turkey…and that through these attackers chaos would be created in Turkey…The (Kurdish rebels) or Daesh could emerge (as culprits) of today’s terror event.”

He promised to catch and punish the attackers. If so, he probably doesn’t need to look very far. Here’s the evidence.

Just two months ago Davutoglu himself claimed that the PKK, the Kurdish rebels, were controlling the HDP, the Kurdish party and victims of the attack. So the PKK bombed the group that they control. That’s right. Those are the Prime Minister’s own words. If only ISIS would bomb themselves too.

But there is a group that does want those young Kurdish party activists from the HDP dead. Those plucky youths denied President Erdogan and his Prime Minister Davutoglu a majority in the June elections. Ever since, bombs have been detonated at HDP peace rallies designed to convince fellow Turks to stop attacking Kurds, defying Erdogan’s autocratic style.

Immediately after the bombing, Prime Minister Davutoglu’s regime shut down all social media sites “to avoid spreading panic.” The bomb already did that. Such a move was only designed to keep the truth from leaking out.

Additionally, the Turkish government, under Davutoglu’s party, arrested Bulent Kenes, editor of Today’s Zaman, an independent newspaper, for “insulting President Erdogan,” despite repeated claims that they do not silence dissent.

Only a fool would fall for these stories, and believe such a regime. But that’s what U.S. President Barack Obama, British Prime Minister David Cameron, and German Chancellor Angela Merkel did. Instead of demanding answers, or even the release of the arrested editor, they all called Erdogan to offer their condolences for the attack. Merkel even added “I am convinced that the Turkish government and all of Turkish society stands together at this time with a response of unity and democracy.”

Erdogan must still be laughing at their naiveté.

Western powers have repeatedly fallen for Erdogan’s lies. Meanwhile, ISIS and the Turkish ruling party get stronger, terrorism grows, and our Jewish and Kurdish allies get weaker. It’s time to ask why. If you agree with me, it’s time to contact our leaders and demand answers.