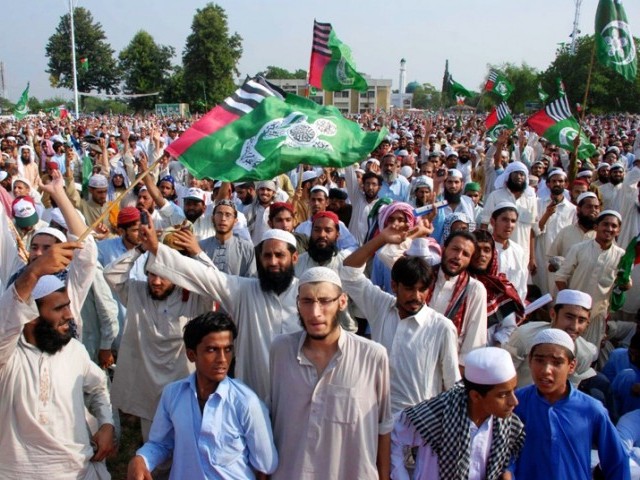 Roaring motorcycles screeching to a halt, panicked bystanders scampering away to safety, snarled-up traffic and young men taking charge, blocking off the PIDC road adjacent to the Chief Minister’s House—Maulana Aurangzeb Farooqi had stamped his authority with his blusterous arrival.

The entire exercise was in response to a two-day sit-in staged by a civil society group demanding that the state should arrest the Ahle Sunnat Wal Jamaat leader for spreading sectarian hate.

Farooqi, in turn, displayed his street muscle to intimidate the civil society and the state.

Who is Farooqi? How and where has he consolidated his political capital?

Maulana Hasan Zeb, an ASWJ representative who is known for his fiery speeches, said Farooqi started his political career as an activist of their party, but with his paramount influence among party cadres and phenomenal oratory skills in wooing the masses, he soon rose to the rank of a central leader.

Police arrested Farooqi near Taxila on June 5 when he was travelling with his party activists to the Mansehra district in Khyber Pakhtunkhwa on a personal trip, said ASWJ leaders in Karachi.

The media, citing the police, report that the counter-terrorism department has registered a case against him and he has also been booked in over a dozen other cases at different police stations across the province.

“He’s merely a mobster with henchmen,” remarked a religious figure of the city requesting anonymity. However, considering the last election result of the PS-128 constituency, his claim does not seem that convincing.

The ASWJ, which operated as Sipah-e-Sahaba Pakistan and Millat-e-Islamia Pakistan before both were banned, was founded in 1985 with a primary agenda—“the declaration of the Pakistan’s Shia population as non-Muslim through a constitutional amendment.”

It contested the 2013 general polls under the electoral alliance of the Muttahida Deeni Mahaz.

Though the Muttahida Qaumi Movement had managed to win in the PS-128 constituency, its candidate Waqar Hussain Shah received 23,827 votes against the 23,625 bagged by Farooqi. The MQM’s thin margin of victory vindicated the ASWJ’s political clout in the vicinity. “It was a nightmare contesting elections there. My car was once ambushed by their (the ASWJ’s) men after which the army escorted me from the area.” When asked about his absence from the area, Shah shot back with a question, “Would any sane mind visit the area where his life is under threat?”

The election result in the Pashtun-dominated constituency where most residents are labourers working in the industrial areas of Korangi, Landhi, and Malir marks a notable difference in terms of priorities than in the rest of the city. Unlike other constituencies, the much-hyped Pakistan Tehreek-e-Insaf stood fifth in PS-128 with only 3,176 votes.

Marred with infrastructure, electricity and health woes, the vicinity is a web of semi-cemented houses connected by narrow lanes.

Referring to the impoverishment there, a resident remarked, “The area more or less looks like a war-torn city of Afghanistan.” Apart from poverty, the other prominent aspect of the constituency is the high number of mosques and madrasas there.

Former MPA Amanullah Mehsud said most of seminaries in the area were affiliated with the Taliban and other terrorist outfits before the crackdown on criminals was launched in Karachi.

Gulshen-e-Buner, an area which was considered a stronghold of the Tehreek-e-Taliban Pakistan before the operation started, also falls in the constituency and many policemen, political activists, and polio vaccinators have been murdered in terrorist attacks there.

Talking to The News at his madrasa, Jamia Siddiqia, Zareen said his party was subjected to electoral fraud in the last polls.

“Around 40,000 people of the constituency had taken oath to vote for Farooqi sahib… we can’t understand how we lost the election then,” he added.

“There were 29 candidates contesting the PS-128 poll, but the appeal and reach of our party leader was far better than others because of our influence in the area.”

Going by the graffiti, party flags, the number of active madrasas and the personal following of Farooqi, the claims seem to hold substance.

Zareen maintained that with the operation under way in the city, the upcoming local bodies polls were likely to be held transparently, and that would give his party the chance to flex its political muscle.

“Our focus is on the 17 union councils of the Malir district in local bodies elections. We will be contesting there under an electoral alliance with the Pakistan Rah-e-Haq party,” he said

“We are expecting to fetch more votes than the MQM there, and it’s the Pakistan People’s Party that will pose a challenge to us.”

When asked about the repeated charges of hate speech against his party leaders, Zareen bluntly responded they could not stray from their main agenda.

However, he hastened to add, “The election result vindicates our politics. People vote for us on the basis of our agenda. With their power, we will enter the corridors of power with the same agenda.”

So what has worked for the ASWJ in the constituency that did not yield the desired results for it in other parts of the city?

Umar Muawwiya, the ASWJ central spokesperson in Karachi, told The News that other than Farooqi‘s clout in the area, the Jamia Dar-ul-Uloom Karachi, one of the key Deobandi seminaries in the country, played a phenomenal role in securing financial support and votes for the party.

“We were supported by senior clergymen, who after three consecutive meetings, openly declared their support for us,” he said. “For the first time in history, the students and women of the Dar-ul-Uloom came out from the madrassa to cast their votes.”

Interestingly, the Jamiat Ulema-e-Islam-Fazl, despite the Dar-ul-Uloom’s constant pressure to withdraw its candidate in Farooqi’s favour to consolidate the Deobandi vote bank, still decided to contest the polls.

Though it managed to fetch only 947 votes, its presence deprived Farooqi of electoral success, given that he lost the election with only a margin of 202 votes.

Miles away, sitting in a heavily-guarded two-room office in Defence, Mehsud, a former Awami National Party MPA who has recently joined the PPP, admitted that during his tenure, the impoverished constituency of PS-128 was neglected.

“A lot could have been done,” he said. During my tenure, I was one of the two Pashtuns in the assembly but focused on the rivalry with the MQM that time. But now with the PPP, I will be able to focus on my area and its residents.”

When asked about his poor electoral standing in the last polls and corruption allegations, the former lawmaker replied with a tinge of anger in his voice.

“First of all let me reply on the election result. With no election campaign at all because of threats from their [the ASWJ’s] Taliban brethren and surviving a bomb attack on the election day in which my four personal guards were killed, how on earth could I have won?”

After a brief pause, he continued, “Let me now come to the financial accusations. They are baseless and those making these allegations should prove them.”

Around 40,000 people of the constituency had taken oath to vote for Farooqi sahib… we can’t understand how we lost the election then

It was a nightmare contesting the election there. My car was once ambushed by their [the ASWJ’s] men. Would any sane mind visit the area where his life is under threat?

With no election campaign at all because of threats…and surviving a bomb attack on election day in which my four personal guards were killed, how on earth could I have won?