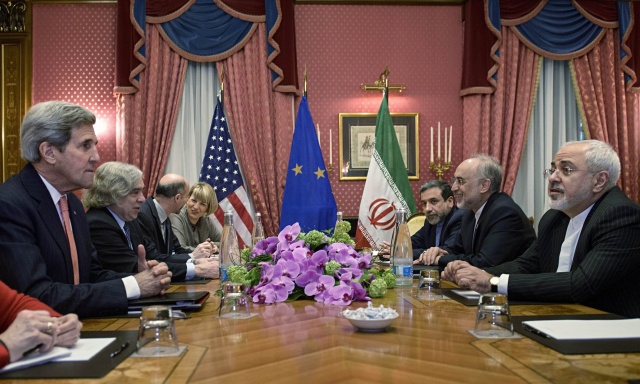 You may have often heard from political pundits that the second term of a presidency is often uncharismatic and low-key. This certainly does not seem to apply to President Obama who used up every bit of his last resource to crack his biggest foreign policy initiative with Iran and let diplomacy win, which has certainly made the world a safer place.

The Joint Comprehensive Plan of Action contains three sentiments which is in our and our allies’ best interest. It cuts off Iran’s pathway to a nuclear weapon including covert paths, heavy transparency clauses and sanctions that will be back if Iran violates the deal.

This is the best option in terms of negotiation, Republicans’ constant mud-slinging on the deal does not make it weaker, world leaders have requested the red party to approve the deal in Congress, and    if they do not, Obama has found  a way around it. As most predict, Republicans will be rejecting the deal in Congress, to which President Obama has made it clear he will veto any such resolution that comes to his table.

To override the veto, Republicans will require  two-thirds majority in both chambers, which is nearly impossible because it is unlikely democrats will go against the president on a rather successful diplomatic initiative.

Those that have been speaking against the deal have one major clause in their argument, and that is the isolation of our biggest ally, Israel in the region. Prime Minister Benjamin Netanyahu has continuously opposed the deal, going to the extent of appealing to the American Jews to not support it. Now, this act makes it seem as though the entire Israel is against our deal with Iran, which is not true.

Many in Israel believe this is the best outcome, and one person who does is Hillel Schenker, co-editor of Palestine-Israel Journal who lives in Tel Aviv.

Schenker says, “Well, I’m an Israeli who lives in Tel Aviv and experienced Saddam Hussein’s Scud missiles raining down on the city in 1991; When I look at the Iran deal, I see a deal which prevents Iran from achieving nuclear weapons for the next 10-15 years, and puts in place an inspection regime, which will make it very difficult for Iran to ever pursue nuclear weapons without being detected.  Therefore, I support the deal, as being in the best interests of both Israel and the United States.”

Schenker also says he is not alone and he is part of an initiative by a group of concerned Israeli citizens, many of them prominent academics, who are sending a letter to all of the members of the American Congress and Senate, which begins with the following sentences:

“We, the undersigned Israeli citizens, wish to congratulate the United States, Russia, China, France, Germany and the United Kingdom, upon reaching an agreement with Iran on its nuclear program.”

Moving forward, Iran could be one of our key strategic allies in the region surrounding Afghanistan, currently we are allied with Pakistan, which is proving disastrous in every sense. There are constant bombings in Kabul, Afghanistan’s capital. The state of Pakistan, with  covert support from its ISI, is using our money to kill our troops and Afghanis in the region. It is in Pakistan’s interest that the region remains far from stable. And this is not me saying it, Afghanistan’s President Ashraf Ghani in a series of tweets has indicated Pakistan’s involvement in Afghanistan. Here are some of his tweets, “Pakistan still remains a venue and ground for gatherings from which mercenaries send us messages of war. The suicide training camps and the bomb making facilities used to target and murder our innocent people still operate, as in the past, in Pakistan. We hoped for peace, but war is declared against us from Pak territory; this in fact puts into display a clear hostility against a neighbor.”

Over 2 billion dollars in aid goes to Pakistan every year from the United States, a case for this funding is made by citing reasons like protection of nuclear facilities in the country which in good English terms is a lie. The Deobandi school of thought from which the Tehrik-i-Taliban has been born is inflicting heavy damage on the Afghan border, what the Pakistan and the ISI does is fund these organizations with money to carry out attacks in Kabul and kill U.S. troops, sometime they work and sometime they do not like when the TTP killed students in Peshawar. You can’t pet a poisonous snake and then complain that it bit you.

Iran and the United States have a common enemy and that is the Taliban, Iran hates the Taliban on account of the Sunni Shia rift. 90 percent of Iranians are Shias and the Taliban is mostly Sunnis, with the Iran deal as a backdrop if we can make Iran our strategic partner in the region, we could certainly end the war in Afghanistan faster and withdraw our troops, a strategic alliance could also mean more transparency and vigilance in Iran in regard to the nuclear facilities.