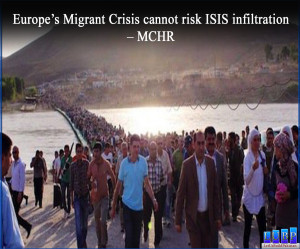 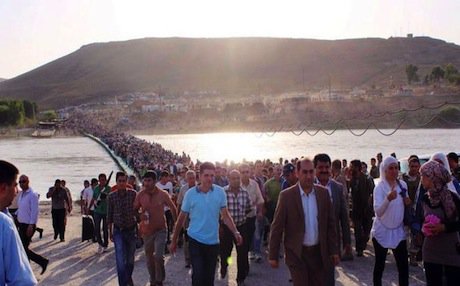 The sight of toddler’s drowning to death as part of the influx of thousands of asylum seekers at the boundaries of Europe has moved the Global community deeply.  While our sympathies are with the victims of ISIS, we are also concerned that the accommodation of asylum seekers should be properly monitored.  Europe cannot afford to allow ISIS to use the recent surge of asylum seekers to infiltrate all over Europe.  Some within the United States Congress have already expressed these concerns:

“On the other side of the aisle, a handful of Republicans led by representative Mike McCaul, have vocally urged the opposite, saying that so many refugees raise “serious national security concerns” and that “the Syrian conflict is a special case” that should temper the US’s historic hospitality toward people fleeing prosecution.

“Screening these refugees is not a task to be taken lightly,” they wrote in a letterto the administration. “We cannot allow the refugee process to become a backdoor for jihadists.”

Refugees hoping to find a safe haven in the US must pass through a gantlet of bureaucracy, security checks and formalities. Every refugee referred to the US is screened by the National Counterterrorism Center, the Terrorist Screening Center, the Department of Defense, the FBI and “specially trained” Homeland Security officers, former State Department spokeswoman Jen Psaki said in February.” Source

As we fulfill our humanitarian duties to accommodate genuine refugees who are fleeing the atrocities of ISIS and Al Nusra in Syria and Iraq, we must also do our due diligence and monitor the asylum seekers before allowing them residency in various European countries.  We cannot afford another 9/11 or 7/7 on US and European soils.  Amongst the thousands of genuine refugee seekers, we must be wary of the budding Major Nadals and Sidique Khan – the Salafi and Deobandi terrorists who perpetrated the heinous Fort Hood massacre and 7/7 bombings.

This questionnaire should be the starting point in ensuring that our humanitarian concerns are balanced with the objective of keeping ISIS and Al Qaeda out of Europe and not allow these Salafi terrorist groups to infiltrate within the refugees.

If Sunni, then are you :

If Hanafi, are you Barelvi/Sufi or Deobandi?

The targeted communities are:

Those belonging to these groups must be given first preference for asylum.

The Salafis and Wahabis must be asked if they

–       ever participated in any militant activity

–      accept the rights of LGBT communities

We must also ask the crucial questions as to why those areas still under the Assad Regime are not choosing to migrate?

Similarly, why are the areas under Al Nusra and ISIS are the only areas where Christians, Sufi Sunnis, Kurds, Shias and Druze are under threat of genocide while the Sunnis, who form the majority of Assad’s army are not migrating enmasse from areas still under the Assad regime.