It has been a 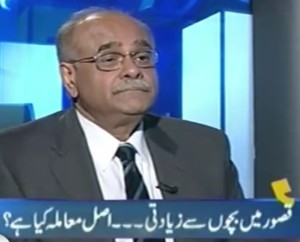 while since I posted something for LUBP and after a prolonged absence I have decided to pen something. Not that I was not paying attention to the political scene in Pakistan, but the apathy which had set onto me was holding me from writing anything.

With the recent Kasur Child Abuse scandal in forefront, one particular aspect of this tragic event has really caught my attention. That is the tone deafness at display of the Noon league and their minions on social media. I pay special attention to takfiri tweeples on twitter and how news travels in that circle of bigots. Not surprisingly majority of these takfiri types are also ardent noon league supporters. And as the Rameeza Nizami expose on sexual abuse started making rounds on social media; the viler these “noonies” became in their opposition.

And to put the cherry on top, along came Najam Sethi. Sethi as readers of this website very well know, has a long history of making outrageous proclamations, most of which never come to fruition. But even more disturbing is his sordid past and present habit of defending and promoting takfiri terrorists. Now we can debate at whose behest does he do the bidding of ASWJ & Noon League, but that is a topic for a separate time.

Sethi is that quintessential 1 percenter; dapper & articulate, whose authoritative styling hides the establishment stooge that he really is. He has the way with powers to be, it seems like Sethi is always in some kind of a caretaker setup. His sophisticated delivery, is what makes him the darling of commercial liberal mafia too.

With the Kasur scandal in full swing; to no one’s surprise Najam Sethi did what was expected. The first segment of his show on August 9th started out as usual with, Muneeb Farooq doing his routine bit. But what followed was truly low even for Sethi’s standards.

Sethi in his usual oratory style started by citing child abuse statistics and how “usual” and widespread is this kind of sexual “activity” is all over Pakistan. He then went on to cite his trusted “Churyia” who was sent by Sethi for a special assignment to Kasur. And how the “Churyia” found that sexual abuse of young boys was nothing new in Kasur, and has been happening there for quite sometimes.

Now, Sethi’s assessment of this kind of abuse would have been perfectly reasonable in the context of Kasur incident. However; what was really disturbing was his total lack of empathy and callous commentary on such sensitive issue. At one point of the show the allegedly trained lawyer, Muneeb Farooq opined how at the beginning; this sexual activity was supposedly “consensual”.

It would be worth asking Mr. Farooq; how a minor can consent to a sexual intercourse with a grown man? Rather than stopping Muneeb in his tracks, Sethi tacitly agreed and added that there is sometimes consent and sometimes coercion. However it is not as black and white as we would like to believe.

However disappointing this ridiculous segment was from Sethi’s show. This only adds to his ignominious track record. Sethi’s decidedly careless commentary may have done endless harm to victims of sexual abuse, who may resist seeking mental and emotional help. The stigma attached with sexual abuse is so deep, that many victims themselves become the predators at later stages of their life. Channel 4s heart wrenching documentary “Pakistan’s Hidden Shame” details the struggles of such victims.

The sensitivity which was required for this subject was nowhere to be seen in Sethi’s program. Disturbingly he towed the same line as people he routinely does bidding for; that this news story was broken in retaliation to a local land dispute. Irrespective of the land dispute between two rival factions, Sethi’s shameless segment was not warranted. I would leave to the readers of this piece to decide for themselves, if Sethi’s program had proper tone for this subject matter, or not.