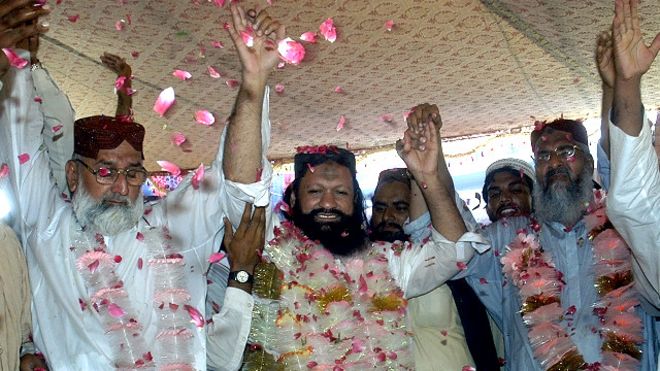 The LeJ chief was accused of involvement in several major cases of terrorism and sectarian attacks on the country’s Shia community, and especially several lethal attacks on Quetta’s Hazaras. The LeJ was also involved in the attack on the Sri Lankan cricket team in Lahore in 2008.

Lashkar-i-Jhangvi is regarded as one of Pakistan’s most dangerous sectarian groups and, often by its own admission, has been involved in a series of attacks on the country’s Shia community.

The group came into being in the 1990s after Riaz Basra, Malik Ishaq and Akram Lahori broke ranks from the Sipah-e-Sahaba Pakistan (SSP) (which in turn was set up Maulana Haq Nawaz Jhangvi in the early 1980s) over differences. However, it took its name from the SSP’s founder, who himself was killed in 1990.

Many reports over the years have suggested that the organization has links with other major terrorist groups in the region including Al Qaeda and the Tehrik-e-Taliban Pakistan. The organization was banned in 2002 by the then government of Pervez Musharraf but continues to operate in Pakistan. Besides Pakistan, the LeJ has also been banned by Australia, Canada, India, Russia, Britain, America and the UN.

Malik Ishaq himself had been implicated by the police in dozens of cases, mostly murder. He was arrested in 1997 and released on bail in July 2011 after serving a jail term of almost 14 years. He was released after the Supreme Court ordered his release dropping most of the charges (34 out of 44, according to press reports then) against him, many of which involved cases of murder, and granted him bail in the remaining 10 cases due to “lack of evidence”.

Since his 2011 release, police and the provincial authorities in Punjab often put him under house arrest, in a bid to reduce sectarian tensions.

In 2013, two massive attacks happened on Quetta’s Shia Hazara community. The first took place in January and the second happened the next month. Both were claimed by the LeJ and their cumulative death toll was a horrifying 190 and several hundred injured. The Balochistan government of Chief Minister Nawab Aslam Raisani was dismissed following the first attack but that did not prevent the second one from happening

Malik Ishaq was arrested following these attacks and since the LeJ had claimed responsibility for them.

Prior to that, the LeJ was also accused by police of masterminding, from inside jail, the attack on the Sri Lankan cricket team in Lahore in 2009, which wounded seven players and a coach, and killed eight Pakistanis. A member of the group Mohammed Aqeel, police said, carried out the attack. Following this attack, Pakistan was stripped of its right to co-host with India and Bangladesh the 2011 Cricket World cup. Since then, it faced cricketing isolation with no team willing to tour it, and this was broken only by the Zimbabwe team’s tour earlier this year.

The first leader of the LeJ was Riaz Basra and he was accused by the government of being behind the assassination of Iranian diplomatic Sadiq Ganji in Lahore and of the killing of cadets of the Iranian Air Force on a visit to Pakistan in the early 1990s. Riaz Basra was killed in a suspected police encounter in south Punjab in 2002 and was succeeded by Akram Lahori. Ishaq was also the Vice President of ASWJ, a banned Deobandi terrorist outfit in Pakistan, whose President is Ahmad Ludhyanvi and sponsors are Tahir Ashrafi, Mufti Naeem and Tariq Jameel.

A March 2002 attack on a church in Islamabad in which five people were killed was linked by police to the LeJ. They based this on the arrest of four members of the group who were arrested following the incident and police claimed that they confessed to the killings and said the attack was in response to the US attack on Afghanistan.

Pakistan’s Interior Ministry said following the assassination of Benazir Bhutto in Rawalpindi in 2007 that the suicide bomber used in the attack was a member of the LeJ.

In September 2011, an attack on a bus carrying pilgrims to Iran in the Mastung Area of Balochistan came under attack. Twenty six of the pilgrims were killed and the attack was claimed by the LeJ. The group also claimed responsibility for an attack on another bus in Balochistan carrying pilgrims returning from Iran. Most of the pilgrims belonged to Quetta’s local Hazara community. in addition to killings Shias, the ASWJ-LeJ terrorists have also killed tens of thousands of Sunni Barelvis, Sufis and other communities.

The group also claimed responsibility for sending a suicide bomber to a school in Hangu in Khyber Pakhtunkhwa province in January 2014. The attacker was stopped by 15 year old student Aitzaz Hasan who lost his life and was later lionised in the media and society at large for his sacrifice.

The growing reach of the LeJ

A 2010 secret report written by Pakistan’s civilian intelligence service said that organisations such as Lashkar-e-Jhangvi and Jundallah are more powerful than in the 1980s and 1990s.

It said that the LeJ had extended its network outside its traditional strongholds in South Punjab, southern districts of Khyber-Pakhtunkhwa and the Pakhtun belt of Balochistan, including Quetta, to the rest of the country.

This happened despite the fact that the outfit was banned in 2002 by then President Pervez Musharraf, in large part because the prohibition seemed more or less on paper, with the group’s infrastructure and sources of funding and support left untouched.