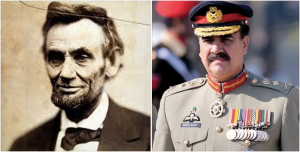 Had a man like Lincoln been Raheel Sharif’s Commander-in-Chief the disaster being presided over in the name of Afghan Govt-Taliban talks would never have been allowed to happen. This is a re-run of the 1990s Peshawar Process which briefly restored peace in Afghanistan under President Sibghat ullah Mujadadi but then led to prolonged civil war between Mujahideen factions competing for power.

We should not have sponsored those talks in the first place; not because the act was ignoble per se but because we could never have been a disinterested neutral peace sponsor. When the accords fell apart and the mujahideen factions went berserk annihilating each other. At the precise moment when neutrality was called for the eternal lure of strategic depth made us take sides in the conflict. We quickly supported the pathan warlord, Gul badeen Hikmatyar, against the Persian Iran backed Burhandiin Rabbani- what followed in Afghanistan was fierce and fearful blood letting which only ended with the rise of Taliban in 1994.

Musharraf’s policy of non interference in Afghan affairs has been completely reversed by Gen. Sharif after the Peshawar school attack. As the Taliban criminals who flee Pakistan find refuge in Afghanistan they are swell the ranks of the Afghan Taliban. Against this backdrop a mediatory role played by us under the watchful gaze of the Americans is beyond comprehension. Or is it? It appears to be strategic depth all over again. A return to 1990s style militaristic foreign policy that aims to keep a frail but “friendly” government in Kabul supported by Taliban arms and ammunition. Things in Afghanistan have changed too. This is not 1984, when Afghans generally considered Pakistanis their brotherly Muslim neighbors. Anti Pakistan feelings in Afghanistan are very real and men like Hamid Karzai and Abdullah Abdullah will go to any extent to counter Pakistani influence in Afghanistan. In this enterprise they have full support of the Indian government, the multinational oil interests and above all the Afghan people, who carry no fond memories of their refugee years in our country. Unfortunately, there will be as great an association of Pakistan and Taliban today as there was in the 1990s if we do not take immediate steps to distance ourselves from the Taliban.

We have to realize that there is nothing new in this policy; nothing ingenious; nothing useful: its old wine in a new package. India is our greatest enemy and shall always be and it is important to hurt her interests everywhere most importantly in Afghanistan. But obsession with India must not work to our detriment through appeasement of any faction of the Taliban or a mad quest for holy grail of “strategic depth.”, which left Pakistan dangerously isolated after 9/11.

Taliban are by their nature non state actors who do not believe in the geographical unity of any nation state: Pakistan or Afghanistan. Putting such people in government is guarantee to brining ruination from within. Swat and Bunair are examples. The Taliban in Afghanistan will only work to destroy the constitution from within and will gain the time and resources to regroup. If long term integrity of Pakistan and Afghanistan can be secured through costly civil war then so be it. It’s a price worth paying. Attempting to side step the difficulty by entering into treaties with people who respect no promises or pledges is merely delaying disaster not averting it. That is something a leader like Lincoln would never have allowed.

As for Raheel Sharif, he should have single mindedly concentrated on making Zarb e Azab a success. The single most important threat to Pakistan is the Islamic State (and its Taliban satellites) which in the past year have consolidated themselves around Pakistan and are waiting for the Pak Army to tire itself out in a war that hits enemy positions in hlliy hideouts but not their breeding grounds in city centers. Instead Raheel Sharif has opened multiple fronts from Karachi to Kashmir: fronts against abstract adversaries like political corruption and economic terrorism: fronts that are incredibly easy to open and unbelievably difficult to close.

Military involvement in civilian matters is a long road to nowhere and must always be avoided in the interest of national security. Raheel has proved himself a general characterized by energy and activity, but not achievement. Zarb e azab has still not reached its “logical conclusion”; people like Abdul Aziz openly preach hate against the state, Lashkar e Jhangvi and Sipah e sahaba carry on business as usual, Taliban network in south Punjab is still intact, Balochistan is still restive and India fires at will across the working boundary. Raheel sharif’s multiple fronts are like Iftikhar chaudry’s myriad suo motu that served no purpose other than distracting the judiciary from performing its core functions. It goes without saying that none of the 99 suo motu ever went to completion.

By all accounts General Raheel is the most popular man in Pakistan today. That’s understandable. In a country where inertia is the hallmark of leadership activity and not achievement is the measure of popularity. But if there is anything military leaders must heed it is the mirage of popularity, the general’s curse! Pakistanis have as brutally booted military strong men out of power as fondly they have invited them to assume it. In all fairness to him Gen Raheel has retored honor and prestige to the army; though the challenge for Pakistan Army has always been to maintain its stature without presenting itself as an alternative to civilian rule. Above all he has given the men in uniform a vision: securing Pakistan. But he needs to disengage himself from the civilian quagmire as soon as possible. As of now he as overstretched in his own country as Napoleaon was in Russia.