“According to latest hospital and rescue services reports, the number of deaths caused by Karachi’s extreme heatwave have risen to as high as 700.

“The number of people who have died in the heatwave has now reached 692,” said Saeed Mangnejo, a senior provincial health official, adding that the toll may rise futher.

The highest number of deaths have been recorded at Karachi’s largest hospital, Jinnah Postgraduate Medical Centre (JPMC), where they have treated more than 3,000 patients, Dr Seemin Jamali told AFP.

Pakistan’s largest charity, Edhi Welfare Organisation, said their two morgues in the city had received more than 400 corpses in the last three days.”

The situation in Karachi calls for a National Emergency.

Electricity: There have been reports that even Jinnah Hospitals have a shortage of electricity. This is an unacceptable situation and no hospitals should have load shedding. The provincial and federal government must jointly work together to provide generators.

Water: Since the last few months, the tanker mafia in Karachi has created an artificial water shortage resulting in exorbitant rates for water. This shortage has only exacerbated the current situation.

Ice: There is also a shortage of ice in the city; ice factories need to be established on a war footing.

Charities: Charitable and propserous people of Karachi should provide free water coolers, first aid equipment and tents (for shade) in all localities in Karachi for emergency relief. 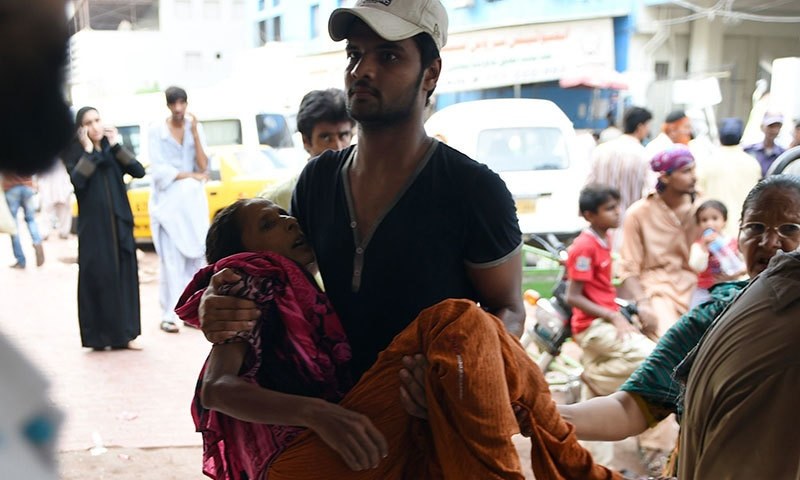 A man carrying a heatwave victim to a Karachi hospital. Source AFP