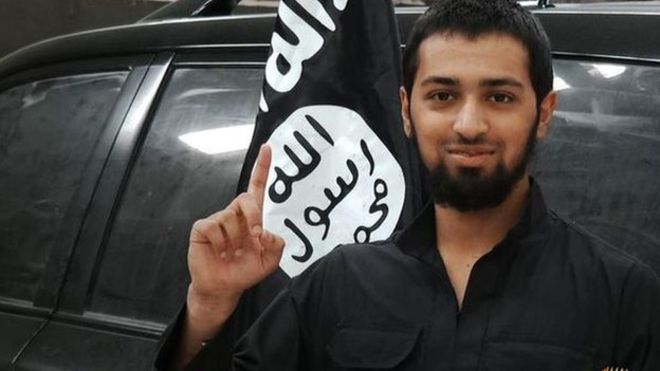 A West Yorkshire teenager is believed to have become Britain’s youngest ever suicide bomber after reportedly blowing himself up in Iraq.

Talha Asmal, 17, was one of four suicide bombers who attacked forces near an oil refinery south of Baiji.

Social media reports linked to Islamic State (IS) said Asmal, going by the name of Abu Yusuf al-Britani, had taken part in the attack.

His family said they were “devastated” at the news.

Asmal, from Dewsbury, would be Britain’s youngest known suicide bomber. Another West Yorkshire teenager, Hasib Hussein, was almost 19 when he blew himself up on a London bus in the 7 July 2005 attacks.

A statement issued by Asmal’s family said: “Talha was a loving, kind, caring and affable teenager.

“He never harboured any ill will against anybody nor did he ever exhibit any violent, extreme or radical views of any kind.

“Talha’s tender years and naivety were it seems however exploited by persons unknown who, hiding behind the anonymity of the world wide web, targeted and befriended Talha and engaged in a process of deliberate and calculated grooming of him.

“Whilst there it appears that Talha fell under the spell of individuals who continued to prey on his innocence and vulnerability to the point where if the press reports are accurate he was ordered to his death by so-called Isis handlers and leaders too cowardly to do their own dirty work.

“We are all naturally utterly devastated and heartbroken by the unspeakable tragedy that now appears to have befallen us.”

The flow of young men and women to warzones in Syria and Iraq continues to be the biggest challenge to Britain’s counter-terrorism effort.

Senior officers estimate more than 700 British citizens have now made the journey, some taking on the name “al-Britani” to signify their origins. Half have come back to the UK, posing the risk that they might plan attacks.

BBC research suggests more than 30 are still in the warzones, and possibly as many as 50.

However its estimated a third are not known to police and the security services, making their job of tracking extremists and prioritising those posing the greatest risk much harder.

Shahid Malik, the former MP for Dewsbury and a family friend of the Asmals, said: “It is disturbing to see how relaxed he looks in the Isis photographs allegedly taken just prior to his suicide mission.

“He looks at peace. It’s like he’s ready to go and meet his maker. This is a clear indication of just how successful the evil Isis [also known as IS] groomers have been in poisoning and brainwashing Talha and kids like him.”

IS is a radical Islamist group that has seized large swathes of territory in eastern Syria and across northern and western Iraq.

At least 700 people from the UK have travelled to support or fight for jihadist organisations in the area, with the majority joining IS.

“To most people it doesn’t really resonate but to individuals who are particularly vulnerable to this kind of thing, it does.”

A BBC News database tracks those who have died, been convicted of offences relating to the conflict or are believed to still be in the region.

West Yorkshire Police said: “The police have been made aware of media reports with regard to the death of a British National in Iraq.

“The identity of the person who has reportedly died has not been confirmed at this time and we are unable to comment further.”

Munshi’s brother, Hammaad Munshi, was arrested in 2006 at the age of 16 after police found a guide to making napalm on his computer.

He became the youngest person to be convicted under the Terrorism Act.

In a statement, the Home Office said: “Since 2011, we have trained more than 160,000 people working on the front line of our public sector to identify and prevent extremism, excluded nearly 100 preachers of hate – more than any other government – and successfully taken down more than 90,000 pieces of terrorist-related material from the internet.

“We also removed or refused 30 passports in 2013 and 2014 where people were considered to be at risk of travelling to Syria or Iraq.”