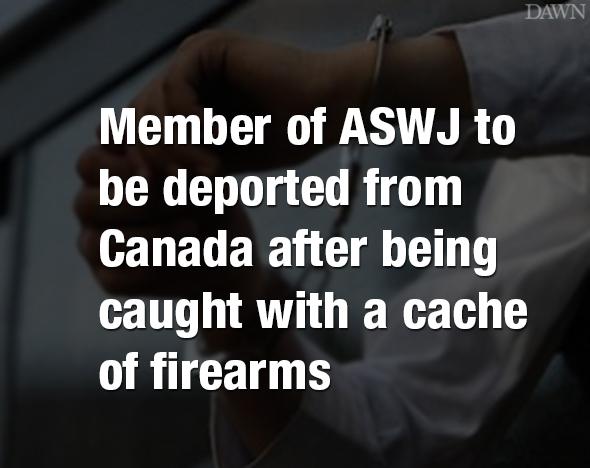 TORONTO — A member of a Pakistani terrorist organization who was caught in Ontario with a cache of firearms will be deported within the next month, a Canada Border Services Agency officer said at a hearing Monday.

Muhammad Aqeeq Ansari, who has lived in Canada since 2007, will be deported as soon as travel arrangements have been finalized for himself and the CBSA officers who will escort him to Pakistan, Naureen Ismail said.

Ansari has a valid passport and has waived his right to an assessment of the risks he might face upon his return to his native country, Ismail told the Immigration and Refugee Board at a hearing to decide whether to keep him in custody.

“We anticipate Mr. Ansari’s removal will be effected in the hear future,” Ismail said, arguing he was a flight risk and danger to the public. “We do expect that it will be within the next month but I can’t get any more specific than that right now.”

Ansari refused to participate in the hearing. His lawyer, Derek Lee, a former Liberal MP, did not attend the session. IRB Member Karina Henrique ordered Ansari to remain in detention in Lindsay, Ont., saying his release was “out of the question.”

The fact, however that he amassed $20,000 in guns and ammunition over such a short period raises questions and concerns, that remain plausibly unanswered, regarding his motives and whether there was an underlying plan given that he also spent a fair amount of time at the gun range practicing his shot

The IRB stripped Ansari of his permanent resident status and ordered deported last month, ruling he was a member of the terror group Sipah-e-Sahaba Pakistan (SSP), also known as the Ahl-e-Sunnat Wal Jamaal (ASWJ).

In its decision, the IRB said Ansari’s refusal to acknowledge that the SSP had “murdered thousands of people in Pakistan for not sharing their religious views” was “a reflection of either willful blindness or a shared mentality that it is permissible to eliminate anyone who does not share your faith perspective.”

In a basement in Peterborough, Ont., Ansari had stockpiled $20,000 worth of firearms. He made trips to Pakistan to visit a cleric who fought “jihad” in Afghanistan and wrote provocatively about his beliefs on the Internet, once commenting beside a photos of the Toronto Scotiabank Tower, “If I only had a plane.”

“It could have been acceptable that the reason he spent $20,000 purchasing guns and ammunition was the result of the financial irresponsibility of youth and the novelty of having hundreds of thousands of dollars at his disposal,” the IRB wrote.

“The fact, however that he amassed $20,000 in guns and ammunition over such a short period raises questions and concerns, that remain plausibly unanswered, regarding his motives and whether there was an underlying plan given that he also spent a fair amount of time at the gun range practicing his shot.”

Meanwhile, another Pakistani citizen arrested in Toronto in March, Jahanzeb Malik, was still awaiting a decision on whether he would be deported as a threat to Canada’s security. An RCMP undercover officer testified in May that Malik had wanted to travel to Syria to join the Islamic State in Iraq and the Levant but, fearing he would be stopped, decided to conduct a terrorist attack in Toronto instead.