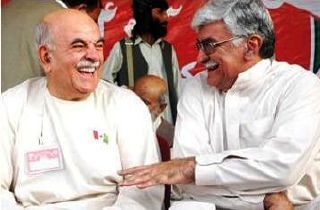 Traditional Pashtun nationalism or hardcore version of it was centrifugal (if we avoid the word separatist). Its ideology was predominantly in favour of Afghanistan and anti Durand Line though annexation with Afghanistan or a separate Pashtun state of Pashtunistan was never so explicit. To be more exact Pashtun nationalists have been suffering from the contradiction of Great Afghanistan or Pashtunistan idealism versus federalist realpolitik within Pakstan.

With the passage of time hardcore version of it diluted and the nationalists themselves are now actively seeking more space in the Pakistani politics and demanding more power share through constitutional means. Apparently this makes them no different from other mainstream Pakistani political parties.

In the last two decades many Pashtun nationalists have been disillusioned with the ideology professed by Awami National Party (ANP) and Pashtunkhwa Mili Awami Party (PMAP). Many have been in the process of joining other mainstream Pakistani parties such as PML N, PPP or the recent wave of PTI which has been successful to make inroads into Khyber Pakhtunkhwa. This also includes many nationalists who are changing their loyalties time and again.

This doesn’t mean that the vote bank of ANP and PMAP decreased. Both the parties have been successful not only to attract fresh blood but were successful to form governments in their respective sphere of influence. Hence there is a visible qualitative decline but quantitative jump for these parties as for as Pashtun nationalism is concerned.

Despite ideological compromises both ANP and PMAP have certain strengths which make them equal to or better than mainstream political parties in Pakistan. Both are democratic, progressive and secular in their outlook. Both represent the true spirit of federalism which only PPP can match. The parties leadership are experienced and well versed in national and international politics. Ironically, it is due to these strengths and not the ideology of Pashtun nationalism that these parties have been expanding within Pashtun population, to say the least.

Are these two parties in a position to make a shift from ethnic Pashtun nationalism to a more inclusive political approach so that other ethnic groups are attracted towards them?