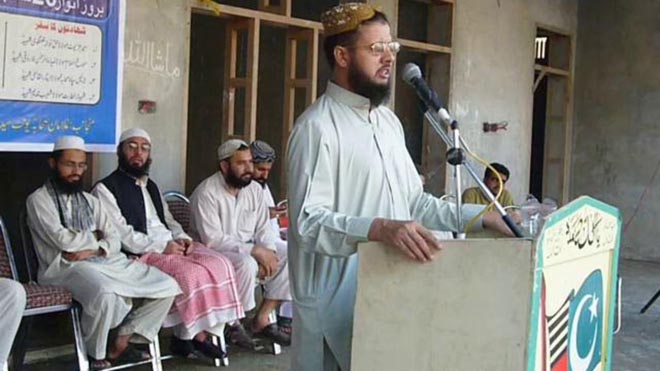 Political analysts, media and civil society organisations are concerned over barring women from voting in by-polls in PK-95, a constituency in Upper Dir district, held on May 7. They, however, seem oblivious of a new and dangerous trend that emerged in the by-polls — the surfacing of a new sectarian group as a third largest political party in the race.

The more interesting thing was the surfacing of the Pakistan Rah-e-Haq Party (PRHP) as the third political party whose candidate Qari Ziaul Haq Haidry bagged more than 3,000 votes.

Hakeem Muhammad Ibrahim Qasmi, a former provincial leader of banned Sipah-e-Sahaba Pakistan (SSP), founded the PRHP in Peshawar in February 2012. Qasmi was elected as member of the then NWFP assembly from then PF-4, a constituency of Peshawar in 2002 general election and after being elected he supported Muttahida Majlis-e-Amal (MMA), an electoral alliance of six religious parties.

Lehaz Ali, a Peshawar-based veteran journalist, says that Qasmi is a very active leader and had organised the party in many districts of the province, especially Peshawar. He says that the PHRP contested the polls in general election 2013 under the banned Muttahida Dini Mahaz, an alliance of religious parties, including the Jamiat Ulema-e-Islam-Sami (JUI-S) and Ahle-Sunnat Wal Jamaat (ASWJ), but could not win any seat from the province.

Irshad Muhammad Haidry, central information secretary of the PRHP, says the party has received good response in the election and now they have fielded their candidates in all districts of the KP, especially in Peshawar. “Only in Peshawar, we have fielded 20 candidates for district councillors and hope we will win a number of seats,” he tells TNS.

The PRHP did not win any seat in the past elections but emerged as a key political party in the politics of KP. It is shocking because of the party’s close affiliation with the ASWJ, an anti-Shia political group, political observers say.

Haidry says the PRHP is an independent religio-political party but at the same time confirms that the party is associated with the ASWJ because they had the same ideology. “Ideologically, we are very close to the ASWJ and therefore we often invite their leadership to our programmes,” he adds.

Background interviews with leaders of the ASWJ, the PRHP and journalists suggest that the ASWJ Chief Maulana Organzaib Farooqi recently inaugurated the PRHP offices in different parts of the province, especially in district Mansehra. Qasmi had also offered ASWJ’s central leader Maulana Muhammad Ahmed Ludhianvi to contest election on the ticket of the PRHP, it was also learnt. “It was decided that in case of imposition of ban on the ASWJ, its leaders would contest polls and carry out its activities under the banner of the PRHP,” says a Peshawar-based seminary teacher who is familiar with affairs of sect-based parties.

“We can say that the PRHP is a political front of the ASWJ,” says Lehaz Ali, who believes that in order to participate in electoral politics in the province, using the platform of the PRHP could be a tactic of the ASWJ. He maintains that the party has given tickets in local bodies to non-religious people and does not want to show it as a hardcore sectarian group in the province.

Security observers also opine that Farooqi, who originally hails from district Mansehra of KP province but is based in Karachi after becoming the central chief of the ASWJ, has not only gathered support of Pashtun community in Karachi but has also shifted its influence to KP, particularly in Hazara division.

Initially, the ASWJ (or the SSP before imposition of ban on it), was organised in Punjab and Karachi. In recent years, their main focus is Balochistan and KP, where the Jamiat Ulema-e-Islam-Fazl (JUI-F) is a strong political party, which also follows Deobandi school of thought. “The shifting of the ASWJ’s central leadership from Punjabi to Pashtun is aimed at spreading the party in the KP and Fata,” says Ahmed Ali, a political scientist in Islamabad.

Recently, Farooqi was stopped by the local administration from entering district Hangu to attend a party event.

Some analysts think that the involvement of sect-based parties in violence has been a dangerous trend which is weakening traditional Islamist parties. For instance, the ASWJ or the PRHP has been trying to replace the JUI-F while the Majlis Wahdat-e-Muslimeen (MWM), a new Shia group formed after the killing of Shias in Quetta and Karachi in 2012, is replacing the traditional Shia groups such as Allama Sajid Naqvi-led Tehreek-e-Jafria Pakistan (TJP).

On the Barelvi front, the Jamiat-e-Ulema-e-Pakistan (JUP) was a representative party that won several seats in general elections in Karachi in the 1970s.

But now the group is weakened because of emergence of the Sunni Tehreek (ST) which the authorities have put on its militants’ list because of its violent activities. Similarly, Jamiat-e-Ahle Hadith, led by Prof. Sajid Mir, is being replaced by Jamaat-ud-Dawaa or formerly banned Lashkar-e-Taiba.