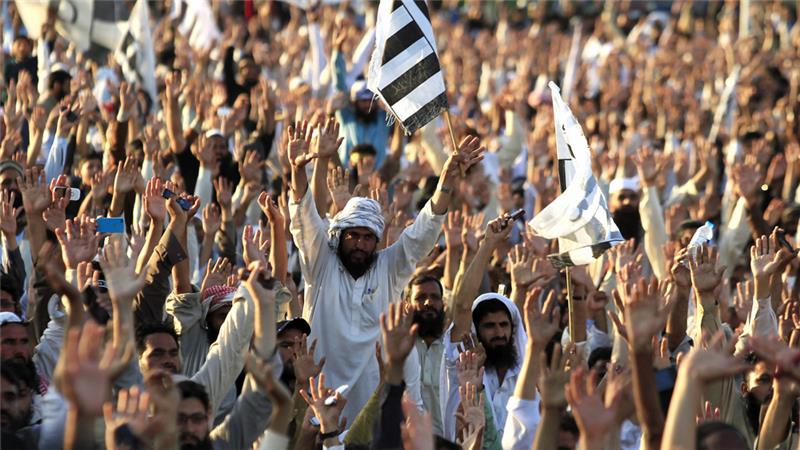 Islamabad, Pakistan – For a man with a $10m bounty on his head, Hafiz Muhammad Saeed seems surprisingly relaxed.

“I meet thousands of people every day, I am open and among them,” he said, laughing at his office in Islamabad, the Pakistani capital. “These people who call me a terrorist are the enemies of Islam.”

Saeed is the 65-year-old leader of Jamaat-ud-Dawa (JuD) and one of the founding members of the Lashkar-e-Tayyaba (LeT), an armed group that has fought Indian security forces in the disputed Kashmir region and elsewhere since 1994.

Most notably, the group is accused of orchestrating the November 2008 Mumbai attacks, where more than 160 people were killed.

In 2012, the US government placed a $10m bounty on Saeed’s head for his role in “terror attacks” as the leader of JuD and a member of LeT – an organisation both the US and the UN consider the former’s “military branch”.

Saeed, however, said there is no link between LeT and JuD, and JuD is purely a charity organisation. Such allegations were “Indian propaganda”, he said.

“Jamaat ud Dawa is a group of invitation to Islam, philanthropy and publishing and distribution. Our mission is, first of all, to educate people regarding Allah’s religion, to teach them the religion,” he told Al Jazeera.

The UN, however, clearly disagrees with this description.

In December 2008, shortly after the Mumbai attacks, it designated Saeed a “terrorist”, adding his name to a list of organisations and individuals subject to international sanctions under UN Security Council Resolution (UNSCR) 1267.

“Hafiz Muhammad Saeed travelled to Afghanistan during the late 1970s or the early 1980s to receive militant training. There he came into contact with Dr Abdullah Azzam, the mentor of Osama bin Laden and other fighters in Afghanistan,” reads the entry on Saeed in the UN’s consolidated sanctions list.

The description adds he is associated with both LeT and al-Qaeda.

“In 2005, Saeed determined where graduates of a LeT camp in Pakistan should be sent to fight, and personally organised the infiltration of LeT militants into Iraq during a trip to Saudi Arabia. In 2006, Saeed oversaw the management of a terrorist camp, including funding of the camp. Saeed also arranged for a LeT operative to be sent to Europe as LeT’s European fundraising coordinator. He established a LeT office in Quetta, Pakistan in June 2006 to assist the Taliban in the conduct of their operations in Afghanistan,” it said.

The UN sanctions include the freezing of all assets, a ban on international travel, and an arms embargo.

One of the LeT men on the list, Zaki-ur-Rehman Lakhvi, “a very important leader of Jamaat-ud-Dawa”, according to Saeed, is on trial for masterminding the Mumbai attacks, but was released from jail by a Pakistani court on April 10.

Pakistan insists it is fulfilling its obligations regarding the UN’s international sanctions list.

“A lot of questions are raised, that ‘so and so’ is roaming free, or ‘so and so’ is speaking [publically], but that is not part of what listing of an individual entails,” said Tasneem Aslam, spokesman for Pakistan’s Foreign Office.

If individuals and organisations are still active, insisted Aslam, they may be doing so under different names from those on the sanctions list.

The UN resolution leaves room for the implementation of sanctions, allowing countries to apply them through their own internal processes.

JuD and its associated charity, Falah-e-Insaniyat Foundation (FIF) – also a US-designated terrorist organisation – have massively expanded their activities in Pakistan in the last few years.

Saeed told Al Jazeera JuD was currently operating a network of schools, universities and religious centres that numbered more than 300 across the country, all registered under its own name.

The group’s publication arm has also been expanding, Saeed said.

Saeed explained along with FIF, the groups operate many medical and food-aid programmes, as well as disaster-response teams, which are often the first to reach the scene of bomb blasts or natural disasters.

Officials privy to the sanctions implementation process in Pakistan admitted to Al Jazeera the stringency with which they are applied depends on how actively the government chooses to apply them.

An official, speaking on condition of anonymity because he wasn’t authorised to speak to the press, said there was a “lack of clarity” regarding the implementation of sanctions, whether UN-mandated or under Pakistani law, and Pakistan was “doing the bare minimum required” with regards to its international obligations.

According to Saeed, the space his group has to operate was won through petitions JuD filed in Pakistani courts.

Saeed said India is largely responsible for the sanctions against it.

“India has gone to the United Nations and had sanctions placed on us but … Pakistani courts have cleared Jamaat-ud-Dawa and set aside all Indian propaganda. They have buried all allegations of terrorism and given us relief, and we work on the basis of the decisions of the courts of Pakistan, and there is no restriction on us,” he said.

Saeed said many of his personal bank accounts remain frozen by Pakistani authorities, but others associated with JuD have had sanctions lifted through court orders.

Saeed’s public profile has clearly not been affected by international sanctions.

In the last few months he has led mass public rallies over the Kashmir dispute, the French satirical magazine Charlie Hebdo and, most recently, calling for Pakistan to join the military coalition in Yemen.

Alongside him at that latest rally was Muhammad Ahmed Ludhianvi, the leader of Ahle-Sunnat Wal Jamaat (ASWJ), an organisation proscribed under Pakistani law for spreading sectarian hatred against Shia Muslims.

The ASWJ has been linked to rising sectarian violence in Pakistan, which has claimed more than 1,600 lives in the last five years, the overwhelming majority Shia Muslims.

“I say this with complete confidence: I do not engage in [violence], neither does my party,” Ludhianvi told Al Jazeera at a meeting at an Islamabad religious school.

“Whether [the attackers] are Shia or Sunni, the government should arrest them.”

Outside, police officers stood guard over the mosque and religious school complex.

Unlike Saeed, Ludhianvi said the government has been clamping down on his group, despite private assurances from legislators they would not be pursued under the country’s new National Action Plan to tackle groups promoting violence.

“I asked some government leaders that they have been using this word ‘banned’ a lot recently; are we also going to be punished due to this?” Ludhianvi said.

“And I was told ‘No, no, we know you, you have no connection to any of these things. This policy is against the terrorists.'”

“There were no obvious hurdles put in our way. We conducted our campaign, and I have not received reports of this happening elsewhere,” he said.

Yet, Ludhianvi brushed aside recent accusations that his party creates an atmosphere conducive to violence, despite the fact it regularly holds public rallies calling for Shia Muslims to be declared unbelievers.

It is a “religious obligation” to call out heretics and it is understandable that acts of violence are occurring against Shia Muslims, Ludhianvi said.

“Several people sit on the media and say, out of ignorance, that no one should call anyone a kaafir [heretic]. It is a very nice sentence, that’s fine. You should not call a Muslim a kaafir.

“But a kaafir is a kaafir, is he not?” asked Ludhianvi.

While there is no clear ideological relationship between them, both JuD and ASWJ continue to operate with freedom in public, despite national and international sanctions.

Saeed denied the space in which his groups operate has anything to do with state patronage, ascribing it instead to the Pakistani courts.

“Look, we talk about courts and the legal system, while terrorists do not accept these things at all,” he said.

Striking a far more conciliatory tone than he does in other public statements, Saeed told Al Jazeera he backs dialogue between India and Pakistan to end all disputes.

In talks with New Delhi, Islamabad must raise “the voice of Kashmiris”, he said.

As fighting in Kashmir continues, JuD and ASWJ are not just enjoying their freedom, but also flourishing.

“You cannot stop anyone from acting in politics just by banning them,” Ludhianvi said.