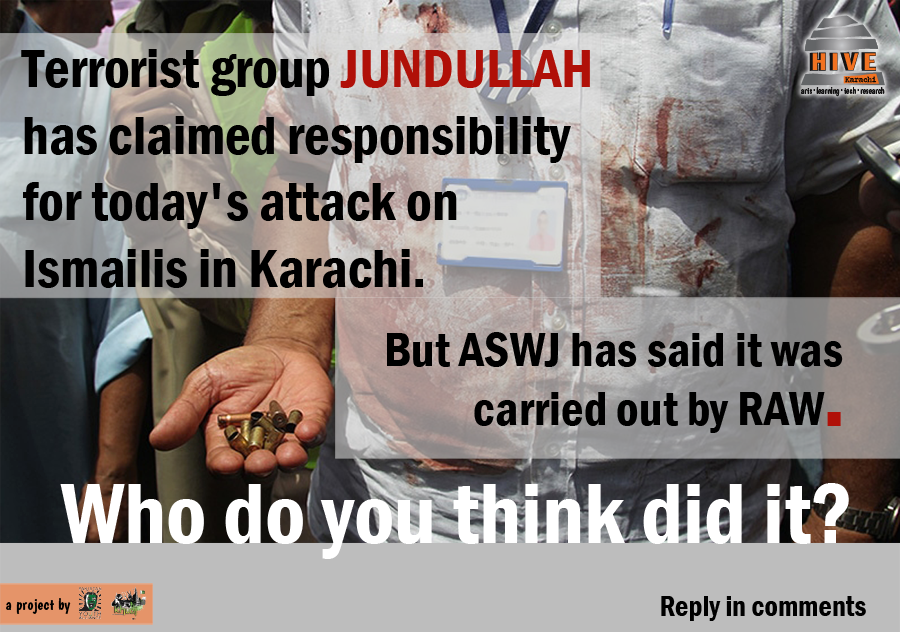 Gunmen in Karachi have opened fire on a bus carrying religious minorities killing scores of people. DW examines the reasons behind sectarian violence in the South Asian nation and how to eliminate it.
At least 43 people were killed and more than a dozen others injured on Wednesday, May 13 when armed men fired at a bus carrying members of the Ismaili community – a minority Shiite Muslim sect – near Safoora Chowk in the southern Pakistani city of Karachi. It was the worst anti-Shiite assault in Pakistan since January 30, when a suicide attack in a mosque in the southern Shikarpur district claimed 61 lives.
“Six terrorists came on three motorcycles; they entered the bus and began firing indiscriminately. They used 9 millimeter pistols and all those killed and injured were hit by the 9mm pistols,” Ghulam Hyder Jamali, police chief of Sindh province, told journalists.
The Jundullah group, affiliated to the Taliban, claimed responsibility for the attack. “These killed people were Ismaili and we consider them kafir [heretics]. We had four attackers. In the coming days we will attack Ismailis, Shiites and Christians,” Reuters news agency quoted Jundullah spokesman Ahmed Marwat as saying.
DW’s Karachi correspondent, Rafat Saeed, however said the Pakistani authorities did not confirm that Jundullah carried out the attack: “I spoke to the Sindh province’s Inspector General of Police, Ghulam Haider Jamali, and he told me that a banned militant group was behind the attacks. He did not name the group,” Saeed said.
Over the past several years, conflicts between the Islamic Republic’s Sunni Deobandi and Shiite Muslim groups have increased in brutality, frequency and mortality. Shiites make up around 20 percent of the country’s predominantly Muslim population.
Sectarian violence has claimed the lives of approximately 2,300 people in the country’s four main provinces and some 1,500 people in the tribal area of the Kurram Agency since 2007, according to a recent report by the Middle East
A number of analysts trace the origins of sectarian violence in Pakistan to the Afghan War of the 1980s. They say that Pakistan’s former military dictator Muhammad Zia-ul-Haq made it a state policy to fund and arm extremist Wahhabi groups in the 1980s, using these organizations against the Shiites to curb Iran’s support in Pakistan and to increase Islamabad’s influence in Afghanistan.
Experts say the latest round of sectarian violence in the country is merely a continuation of the targeting of Shiite Muslims by various militant groups such as Lashkar-e-Jhangvi and the Tehreek-e Taliban Pakistan, who are mainly from the Wahhabi sub-sect known as the Deobandis.
“It’s therefore important that we identify this as not a Sunni-Shiite conflict, but a conflict between Sunni Deobandi and Shiite Muslims – with Shiite civilians bearing the brunt of the violence,” said Arif Rafiq, Pakistan expert and president of Vizier Consulting, which provides strategic guidance on Middle East and South Asian political and security issues.
Sectarian violence in Pakistan is also not limited to any particular region or community. In recent years, prominent members of both the Sunni and Shiite groups have fallen victim to the violence in nearly every province and main city in Pakistan.
Hundreds of Shiites have lost their lives in a wave of terror attacks targeting them in the country’s restive Balochistan province since 2010.
Analysts point out that although the lives of Shiite Muslims are under threat all over Pakistan, those living in Balochistan and the northwestern Gilgit-Baltistan region face a systematic onslaught by the Taliban and other militant groups.
Government’s failure
Human rights groups say the Pakistani government has largely failed to stem the tide of sectarian violence, despite its efforts to prevent the killings of Shiites.
The federal and provincial security forces provide security for Shiite processions, close off the border to prevent attacks during Shiite holy days, and have killed and arrested LeJ terrorists, analyst Rafiq told DW. “But at the same time, as one hand of the Pakistani state fights the terrorists, the other hand engages in deals with their political affiliates, such as the Ahl-e Sunnat Wal Jammat (ASWJ) group,” he added.
Some activists also accuse the country’s powerful security establishment of backing Sunni militants and failing to protect the minority groups.
“The Lashkar-e-Jhangvi, which allegedly receives support from units of Pakistani intelligence agencies, has accepted responsibility for most attacks on Shiites in the recent past,” said Malik Siraj Akbar, a Balochistan expert in Washington.
“The organization is closely connected to the Afghan Taliban and has renewed connections with Jundullah, the anti-Iran Sunni militant group. All these groups share abhorrence for the Shiites,” he said.
Reversing the tide
While sectarianism has become mainstreamed in nearly all regions of Pakistan, the country is far from being divided on sectarian lines in the way Iraq and Syria have been, experts stress, noting that by confronting the ideas and networks behind sectarian violence, the Pakistani state has the capacity to reverse its tide.
They call on provincial and local officials to enforce existing laws that empower them to curb hate speech and incitement, and limit the movement of individuals on terrorist watch lists. The political leadership at the federal and provincial levels also has to bring radical Sunni Deobandi and Shiite leaders together, getting them to agree to a code of conduct, said analyst Rafiq.
Furthermore, the military as well as civilian politicians need to ease out of partnerships with groups that foment hate toward Shiites and other minorities in the country, he underlined. “The longer Pakistan’s leaders continue to directly or indirectly aid hate groups, the longer it will be struggling to put out the fires started with its own hands.”
London-based Pakistani journalist and scholar Amin Mughal said that the policy of supporting Islamist groups had backfired and that the Pakistani state was no longer in a position to control the situation.
“It is a logical consequence of state policies which are based on religion,” Mughal told DW, adding that the only way out of the crisis was for “true secular parties” to come to power and change the course of state affairs.
Source:
http://pukhtunkhwatimes.blogspot.co.uk/2015/05/anti-ismaili-attack-spotlights.html