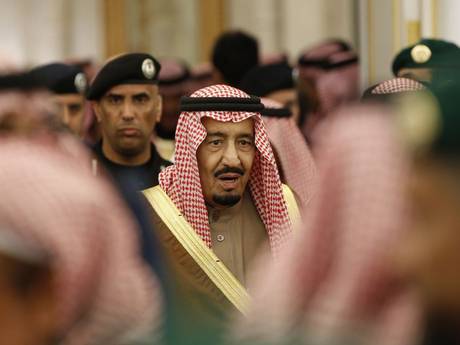 Dozens of Saudi soldiers and Yemeni fighters have been killed in clashes on the border between the countries as five weeks of Saudi air attacks fail to bring the war to an end. Air strikes and heavy artillery fire in the southern port of Aden have left much of the city in ruins and the attempted incursion by Houthi fighters marks an escalation in a conflict seen regionally as part of the growing confrontation between Saudi Arabia and Iran.

The Saudi interior ministry has said three of its soldiers were killed along with dozens of fighters from the Houthi movement, which has seized control of much of Yemen, when the Houthis attacked a border post in Najran province.

So far the air strikes have failed to force back the Houthis. The involvement of a Saudi-led Sunni coalition has connected the crisis firmly with the broader conflict between Sunni and Shia branches of Islam that is inflaming much of the region. The United Nations says that more than 1,200 people have been killed and 300,000 forced to flee their homes as a result of Saudi bombing and ground fighting, which is particularly intense in Aden.

“The scene is disastrous, not just in the streets where fighting is going on but inside houses where families are often trapped and terrified,” Ahmed al-Awgari, an activist in Aden, told Reuters. “Women and children have been burnt in homes, civilians have been shot in the streets or blown up by tank fire.”

Yemen is facing a humanitarian disaster, with half of its 26 million people already malnourished before the air attacks began. Aid agencies say that the Saudi air and sea blockade is preventing Yemen from importing food on which it is wholly reliant. This includes some 90 per cent of the wheat consumed in Yemen and other essentials. Hospitals are closing because they have no fuel for generators and have asked car owners with petrol to help move the sick and injured.

In the last six weeks Yemen has joined countries like Syria, Iraq and Libya that are paralysed by violence, but aid workers say that the Saudi blockade means that conditions are worst in Yemen.

The Saudis appear to have miscalculated in believing that they could split the Houthis, who follow the Zaydi variant of Shia Islam, from the former President Ali Abdullah Saleh, to whom many regular army military units are loyal. The Saudis want to return to power President Abed Rabbo Mansour Hadi, but he seems to have little support and much of the fighting against the Houthis in Aden has been by southern separatists who want to restore south Yemen to the independence it enjoyed up to 1990.

The fragmentation of power in Yemen and the collapse of state authority has given al-Qa’ida in the Arabian Peninsula (AQAP) the opportunity to expand its influence. Long the target of US drone attacks, AQAP has taken over the port of al-Mukallah, the fifth largest city in Yemen after freeing 300 militants from the local prison. Several tribes that used to oppose AQAP now support it because it provides shock troops and suicide bombers to oppose the Houthis.

Isis is for the first time showing that it has strength in Yemen by publishing a video of its fighters executing 15 Yemeni soldiers whom it captured on 12 April in Shabwa Province. Two days later the video shows four of the soldiers, some of whom said they belonged to the 2nd Mountain Brigade, being beheaded by Isis executioners. A further ten soldiers were shot in the head.

Though two thirds of Yemenis are Sunni and one third Zaydi Shia, the country has not previously had the fierce sectarian divisions of Iraq or Syria. But the Saudis claim that the Houthis are the proxies of Iran and part of a general Shia offensive against the Sunnis across the Middle East may be self-fulfilling, particularly if Isis continues to massacre captives whom it describes as “apostates”.

The Saudi air campaign has turned what began as a factional conflict within Yemen into a regional dispute that will make it more difficult to resolve. Indeed, the beginning of the Saudi air war five weeks ago put a stop to negotiations which were about to succeed in establishing a power sharing government in the capital Sanaa according to the UN envoy Jamal Benomar. He told The Wall Street Journal in an interview that “when this campaign started, one thing that was significant but went unnoticed is that the Yemenis were close to a deal that would institute power-sharing with all sides, including the Houthis.”

Ending a war without success so early into his reign would damage the prestige of Saudi Arabia’s King Salman (AP)
It may be that King Salman of Saudi Arabia and his younger son Mohammad, who is defence minister and chief of the royal court, saw the war in Yemen as a way of securing their power and removing rival factions in the royal family from power. On his throne for only  a few months, King Salman has been taking a harder line in the Saudi confrontation with Iran and the Shia. He has not only started an air war in Yemen but has given stronger backing to Jabhat al-Nusra, the al-Qa’ida affiliate, and other jihadi groups in Syria. These have recently won several victories in Idlib province over the Syrian army and forces loyal to President Bashar al-Assad.

A problem in ending the war in Yemen is that it will be difficult for King Salman to come out of it without a success if he wishes to avoid damage to his prestige at the start of his reign. At the same time, Saudi Arabia does not appear to have a plan other than the total defeat of the Houthis and their allies, something that is unlikely to happen because there is stalemate.

The original Saudi strategy was apparently to bomb the Yemeni army in order to pressure former commander President Saleh, leader of Yemen for 33 years up to 2012, to break with the Houthis, but this has not happened.