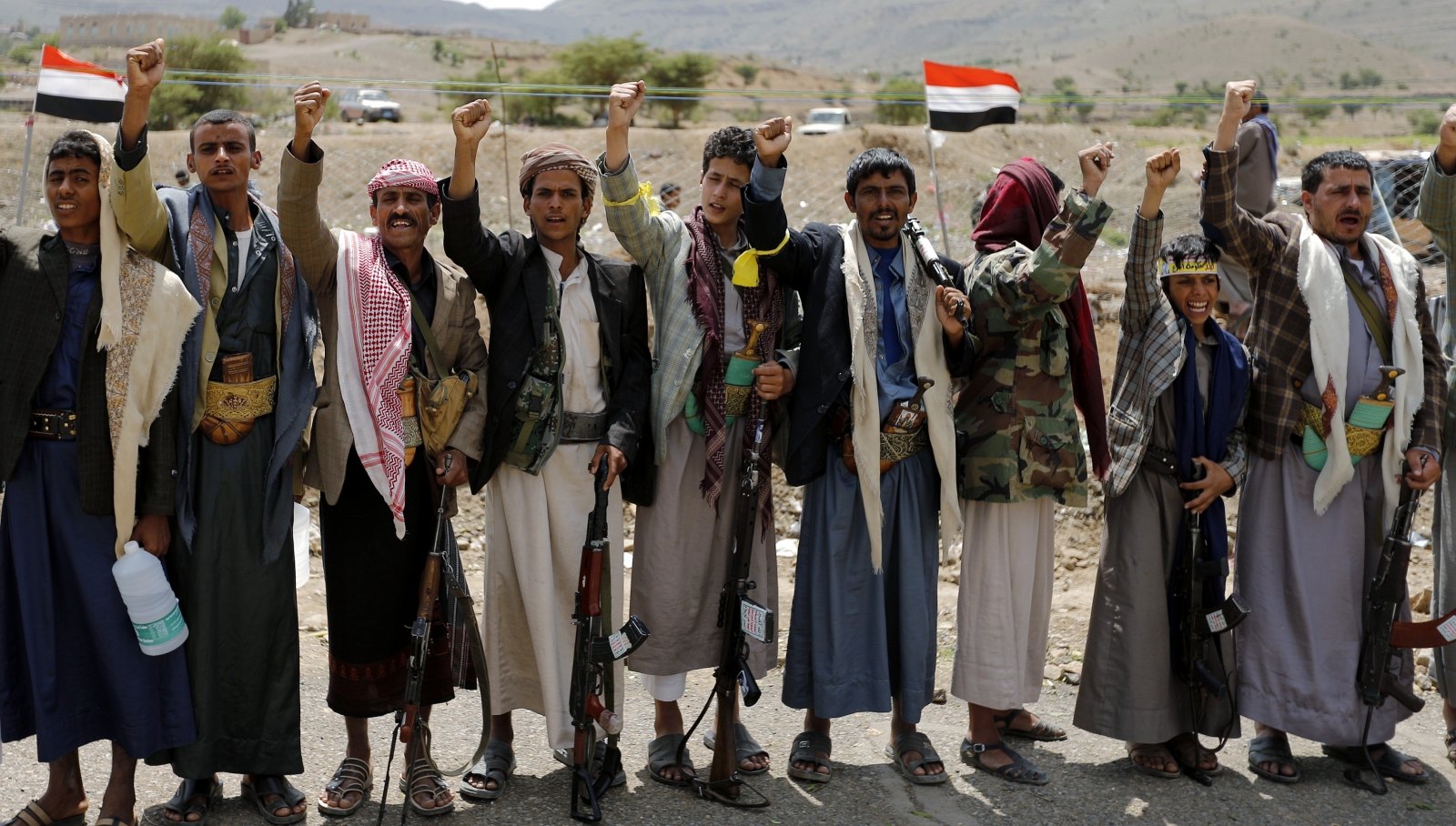 Editor Note : First it turns out that the Zaydis are not even part of the more traditional 12ver (Isnashari) Shia sect but are actually a Sunni-Shia hybrid and follow the jurisprudence of a Sunni Imam. Then they are just one of the many sects who comprise the Houthis which has Sunnis as well. Now Iran does not even back them.

Articles such as these are deeply damaging to the intellectually dishonest “Iran vs Saudi” binary that Pakistan’s Sufyani liberals have been re-hashing for so long – way past the sell by date. The “Iran vs Saudi” binary was such a cool diversion from the real issues. But Saudi Arabia’s aggression on Yemen has not only exposed the Pakistani “liberals” who were peddling this bs binary but also those in the global media who obliquely justify ISIS/Daesh/Al Qaeda/FSA/Al Nusra with the “Iran vs Saudi” binary.

WASHINGTON — Iranian representatives discouraged Houthi rebels from taking the Yemeni capital of Sanaa last year, according to American officials familiar with intelligence around the insurgent takeover.

The seizure of the capital in September came as a surprise to the international community, as Houthi rebels demonstrating outside Sanaa realized the city was abandoned and effectively unguarded. Despite Iran’s advice, the Houthis walked into the city and claimed it.

The newly disclosed information casts further doubt on claims that the rebels are a proxy group fighting on behalf of Iran, suggesting that the link between Iran and the Yemeni Shiite group may not be as strong as congressional hawks and foreign powers urging U.S. intervention in Yemen have asserted.

U.S. lawmakers and Gulf state leaders who are skeptical of the nuclear negotiations with Iran have pointed to the Houthis’ rise to power in Yemen as more evidence of Iran’s unhelpful expansionary objectives in the region. But the news that Iran actually opposed the takeover paints a more complicated picture. As the regime in Tehran has signaled, the Iranians are not unhappy to see their Gulf rivals embroiled in conflict in their neighborhood, but their advice against seizing Sanaa suggests that controlling Yemen is at best a secondary priority for Iran, far behind relief from sanctions that could come with a successful nuclear pact.

On the other hand, the revelation that the Houthis directly disobeyed Iran gives credibility to the White House’s argument that Iran is not directing the rebels, who follow a different branch of Shiite Islam than Iran’s leaders and are believed to care more about corruption and the distribution of power in Yemen than the spread of Shiite influence across the Middle East.

“It remains our assessment that Iran does not exert command and control over the Houthis in Yemen,” Bernadette Meehan, a spokeswoman for the National Security Council, told The Huffington Post.

U.S. intelligence officials have warned for months that Yemen’s chaos is a civil war, not a battleground for regional conflict between Iran and the Sunni-ruled Gulf states. They continue to challenge the narrative pushed by Sunni nations, led by Saudi Arabia, who have blasted the Houthi surge and accused the U.S. of abandoning Yemen to a greedy Iran.

“It is wrong to think of the Houthis as a proxy force for Iran,” a U.S. intelligence official told The Huffington Post.

The Obama administration has recently found itself under renewed pressure to accept the Gulf narrative about the Houthi-Iran connection. In March, the Gulf Cooperation Council — which comprises Saudi Arabia, the United Arab Emirates, Qatar, Kuwait, Bahrain and Oman — made clear that it would act based on that understanding when it began launching airstrikes against Houthi targets in Yemen. The Saudi-led intervention began just days before a vital deadline for the international diplomatic effort to rein in Iran’s nuclear program, and analysts interpreted it as a warning: Even as Sunni Arabs publicly expressed cautious support for a nuclear deal with Iran, they showed they would not shy away from confronting what they see as Iranian expansionism in the Middle East.

Iran has long provided military and financial support to the Houthi group, both before and after the rebels took over Sanaa — though the exact extent of that support remains unknown. The Houthis have said they expect to receive Iranian gasoline and electricity generators to replace supplies once provided by Saudi Arabia and the West.

While that material support is seen as critical to the rebels’ successes, U.S. officials suspect that Tehran’s influence over the group is limited to the provision of resources. Senior administration officials have said the U.S. is aware of Iran’s channel of support to the Houthis, and have cautioned the regime against its continued enabling of the rebel group.

The Iranian government has condemned the Saudi-led offensive against the Houthis, which has done little to allay suspicions that Yemen is the latest grab in Iran’s quest for regional power. Still, Iran publicly insists it does not support any foreign intervention in Yemen.

As Yemen has descended further into chaos, Washington has also quietly backed its Gulf allies in their campaign against the Houthis, offering logistical, material and intelligence support. U.S. Navy officials say the aircraft carrier USS Theodore Roosevelt is steaming toward the waters off Yemen and will join other American ships prepared to intercept any Iranian vessels carrying weapons to the Houthi rebels fighting in Yemen. The Navy has been beefing up its presence in the Gulf of Aden and the southern Arabian Sea amid reports that a convoy of Iranian ships may be headed toward Yemen to arm the Houthis.

The White House is now preparing to make its most significant outreach to Iran skeptics in the region. On May 13 and 14, President Barack Obama will host Gulf leaders in Washington and Camp David. He is expected to announce a ramped-up U.S. security commitment to the Gulf states that, according to U.S. and Gulf diplomats who spoke with regional outlet The National, could take the shape of a NATO-style defense treaty, a nuclear security umbrella, a non-binding declaration or a promise for greater tactical cooperation. The president is meeting on Monday with a top leader from the U.A.E, Sheikh Mohammed bin Zayed.