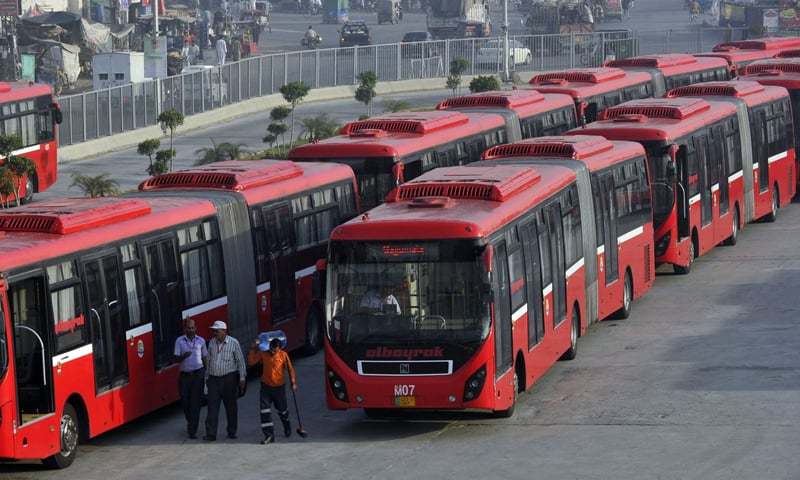 The Metro bus projects in Lahore and Rawalpindi have been criticised by politicians and the news media. Some question their high capital costs, others question if we needed such transit in the first place, and still others would like to have the same funds diverted instead to education and health.

Efficient and reliable public transit is a necessary service that the private sector has failed to provide in Pakistan, forcing the State to offer such services.

Thus, the buses and subways in New York and Chicago, and the Metro bus service in Lahore and Rawalpindi, have to be developed and operated by the public sector.

Metros, or efficient and reliable public transit, are a necessity and not a luxury for urban Pakistan. The private sector, over the past six decades, has made a mess of urban transit services and offered, at best, para-transit in the form of Suzukis, Wagons, and Qingjis. The Punjab government, which once was an active player in delivering urban public transit, had to intervene and offer competitive transit service to those who cannot afford motorised modes of travel, and reduce the demand for motorised trips by offering a viable public transit alternative.

The Lahore Metro, which I reviewed earlier for Dawn, is a successful transit system that carries more than 150,000 passengers every day; in excess of the expected transit demand for the system. The design capacity permits even more ridership provided the fare structure is altered to encourage short-distance rides. The current fixed fare encourages long-distance commuters, which limits the number of riders the transit system can carry.

Given the polarised nature of public discourse in Pakistan, where the PTI and opposition opposes every move by the Sharif governments in the centre and Punjab, it is critical that we objectively review the development of public sector amenities to determine if they are indeed in public’s interest.

The Lahore Metro is a game-changer

For starters, the Metro’s utility is lost on those who do not intend to commute by buses or wagons. They believe that the rest can also commute by cars or motorbikes. This is a misconception of enormous proportions.

Take Lahore, for example, where the Japan government funded one of the largest travel demand surveys in Pakistan that collected information from approximately 17,000 households about their daily trip-making. The survey offered a reality-check: most trips in Lahore were made not by car, but by walking by those who could not afford any motorised mode of travel.

Improving access to health, education, and employment for those who are at the margins of the society, and are forced to walk, limits their ability to find better opportunities. For them, Metro is a game-changer. They can travel in Lahore from Shahdara to Gujju Matta, and crisscross the urban landscape to access opportunities that were available in the past only to those who could travel by car or by motorcycles.

As a young reporter in the early ’90s, I travelled along Murree Road every day from Mareer Chowk in Rawalpindi to the newspaper’s bureau offices in Islamabad. We were herded like cattle on buses and wagons, humiliated in the process. No one on the bus, including myself, could afford a car or a motorcycle.

When the Metro starts operating in Rawalpindi, it will allow decent public transit commuting to the very large labour force that resides in Rawalpindi, but works in Islamabad where housing is out of the reach for most who work there.

Those who ill-planned Islamabad provided housing for the elite, but ignored the housing needs of low-income workers; a planning failure of epic proportions.

The Rawalpindi Metro will also carry a large number of students and patients who may access, at affordable commuting prices, the education and health services along the transit corridor. These benefits will be lost on those who do not intend ever to ride a bus.

Many argue that the Metro transit systems are being built at prohibitive costs. There is merit in this criticism. My dear friend, Professor Darshini Mahadevia of CEPT University in Ahmedabad, India, has reviewed the Bus Rapid Transit (BRT) operations in India. Comparing with her review of the BRT systems in India, one can conclude that the Metro systems in Pakistan could have been built cheaper.

Whereas the BRT system in Lahore was built as a prototype to illustrate the BRT’s benefits to the rest of the country, the Rawalpindi Metro did not need to be equally luxurious and expensive. This would have freed up sums that could be diverted to health and education in Punjab.

For comparison, consider Toronto, where transport planners are studying the development of a $9 billion improvement to the regional rail network to address the virtual gridlock on roads and highways. The development is intended to transfer urban commuters from cars to fast-moving regional rail system. The public sector is responsible for the development and investment in the project, whereas the private sector has been involved to develop intensive land use along the transit corridor to generate new tax revenue and subsidise the capital costs of the project. More recently, New York City did the same for a subway extension in Manhattan.

For future transit development in Pakistan, such public-private collaborations should be an integral part of the design process to reduce capital cost burdens on the State.

The State has to build what the rest will not.

It can do this more effectively by keeping capital costs low. This will also reduce reliance on foreign debt and the subsidy needed to operate the system.