Clearly, things are changing in Pakistan. While a section of Pakistan’s s0-called “liberal intelligentsia remains ossified in their thinking, their pro-Taliban “anti-establishment” icon, Nawaz Sharif, has once again failed so far, in dragging Pakistan completely into the Saudi camp.

Aside from the spineless support by slavish allies like Zardari and sectarian allies like banned Deobandi terrorist groups (ASWJ-LeJ) , Prime Minister Nawaz Sharif  has failed to find widespread support to drag Pakistan into Saudi Arabia’s clear aggression against Yemen and the ongoing struggle there to restore Yemen sovereignty vis-a-vis Saudi interference. 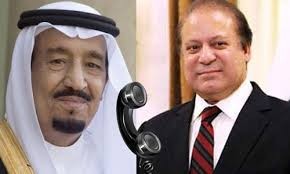 Al-Sheikh, this is your loyal slave Al Nawaz. Just a phone call away to do your dirty work

“When you have spent the past 2 weeks telling the world that you want the Pakistan Army involved in the conflict, or as the media has reported it “the Pakistan Army wants to be involved,” only to turn and demand that only Sunni officers and soldiers are sent to fight, you have to start to wonder what the greater game is here.” Source

However, media commentators like Ejaz Haider, Faisal Raza Abidi, Zaid Hamid and Zafar Hilaly who are generally known to present the army point of view have been vociferously against any involvement or role for the Pakistani army in Yemen.

“Recently, Islamabad has been reported to either have agreed to participate in bombing Yemen or to be at a crossroads, dithering between blindly supporting Saudi Arabia for money and strategic gains or restraining from a foreign war to address and alleviate radical militias and contentious politics at home” Source

In these clips,  the guests clear up the vicious propaganda that misrepresents the Hanafi Zaydis as Iranian proxies when in reality, they are just fighting for their political rights and are refusing to be a client state of the Saudis!

As per some unconfirmed reports, members of banned ISIS-affiliated Deobandi terrorist groups (ASWJ-LeJ, Jundullah, Jamaat ul Ahrar)  are being recruited to fight in Yemen. Since these groups are closer to Nawaz Sharif and are opposed to the ongoing military operation (reference Lal Masjid/ASWJ-LeJ) against the Taliban, it is quite likely that they are Plan B in case the Pakistan army does not seem in the mood to entertain Nawaz Sharif’s requests to join the Saudis.

Whatever the outcome, it is clear that there are sections within the Pakistan army that are not as Pro-Saudi as the current Prime Minister. This is a departure from the days of former COAS General Kiyani and former D G ISI, General Pasha – who were very close to the Saudis. To the extant that the Saudis preferred to meet with General Kiyani as opposed to the former President Zardari.  General Kiyani and CM Punjab, Shahbaz Sharif, brother and co-leader of the “anti-establishment” Nawaz Sharif,  frequently met after hours – a privilege that was not extended to any of the other five provincial heads and chief ministers of Pakistan.

An educated guess would be that the current army leadership and Nawaz Sharif do not seem to be on the same page on Yemen.