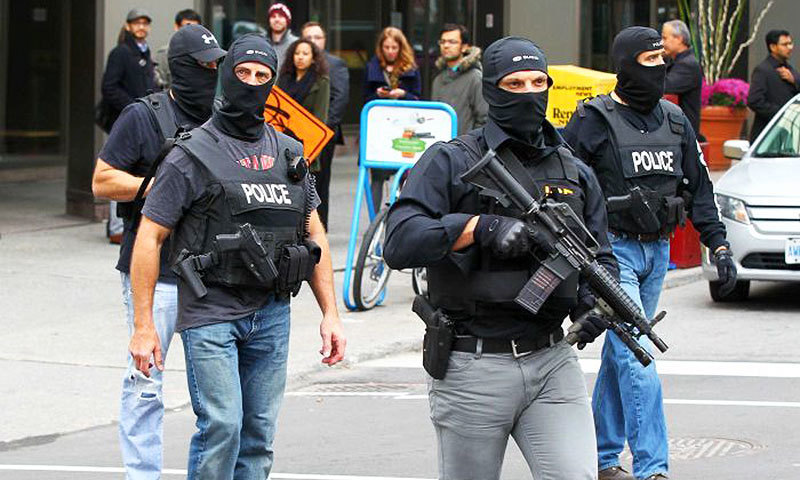 We have dreaded this, but knew it may happen one day. An armed assailant attacked the Canadian Parliament and other sites in Ottawa, Canada’s capital. Killing one soldier; and injuring at least three others.

The attacker, Michael Zehaf-Bibeau, 32, was a “high risk” suspect whose passport had been confiscated. He was also a Canadian convert to Islam.

Only this week, a newly converted Canadian Muslim killed a soldier in Quebec and hurt another.

Canada’s growing problem with extremism is now going to dominate the country’s domestic and foreign policies.

The jihadists have been making inroads among the Muslim youth in Canada. They have pried on the fascination with violence and provided an avenue to rationalise morbid fetishes.

Resorting to violence in Canada, which has treated immigrants with unparalleled generosity, makes no sense. Still, 18 youths from the Toronto region were arrested in 2006 for plotting violent acts against Canadians. Some accused have been convicted and are now serving long sentences.

Earlier in 2004, Momin Khawaja, a software engineer from Ottawa, became the first to be accused and convicted under the Canadian Terrorism Act for plotting a bomb attack. He was initially sentenced to 10.5 years, but later his sentence was increased to life imprisonment.

Despite the overwhelming evidence documenting the spread of extremism among the Muslim youth, most Muslims are in denial.

They still believe that this is all part of a big conspiracy to malign the Muslims. Mosques in Canada continue to host speakers from abroad who glorify violent struggles and try to recruit Canadian youth for the wars in Syria, Iraq, and Afghanistan.

Momin Khwaja was born to Pakistani emigrants who arrived in Canada in 1967. Mahboob Khawaja, Momin’s father, had lived earlier in Saudi Arabia.

A large number of Muslim emigrants to Canada are natives of South Asia, but have spent considerable time in the Middle East where they have been influenced by radical views preached by the officially sanctioned clerics.

Martin Rouleau, who ran over two Canadian soldiers with his car earlier this week, is a recent convert to Islam. He newly grew a thick beard. His twitter account highlights the ISIS flag as he spoke of “the fire of Hell for disbelievers”.

It is not difficult to trace the source of these violent ideologies.

A report by the European Parliament has identified the Wahabi and Salafi roots of global terrorism. The report blamed the charities and other sponsors in Saudi Arabia and the rich Arab states for sustaining the violent militias from Syria to Afghanistan. The report cautioned that given the Salafist/Wahabi movements were deep rooted in terrorism,

We must conclude the risk of the perpetuation of the threat which above all menaces the local populations but also the political and economic interests of all nations present in those areas.

Only last month, a spokesperson for ISIS called for attacks on Canadians. In a long speech, Abu Muhammad Al-Adnani urged ISIS supporters not to spare civilians in their attacks against Americans, Australians, and Canadians.

“Rely upon Allah, and kill him in any manner or way however it may be. Do not ask for anyone’s advice and do not seek anyone’s verdict. Kill the disbeliever whether he is civilian or military, for they have the same ruling,” he said.

What may appear to some as mere empty threats have been enacted in the streets of Ottawa.

Radical Islamic extremists are now relying increasingly on the new converts for they are not easy to detect by the security agencies.

The attack on the Canadian Parliament will change Canada in more ways than the assailant may have originally intended.

I remember once in the mid-90s, our car broke down at the Parliament Hill. No cops or barriers prevented citizens from walking or driving up to the historic building. I can only imagine how this may change now with barriers, barricades and body searches. Attacks on civil liberties will follow.

Muslim parents and elders in Canada have a choice.

They may retreat to their comfort zone and blame all this on a conspiracy or play an active role in raising their children by advising them of how fortunate they are to be in Canada; a place and people that has loved and nurtured them.